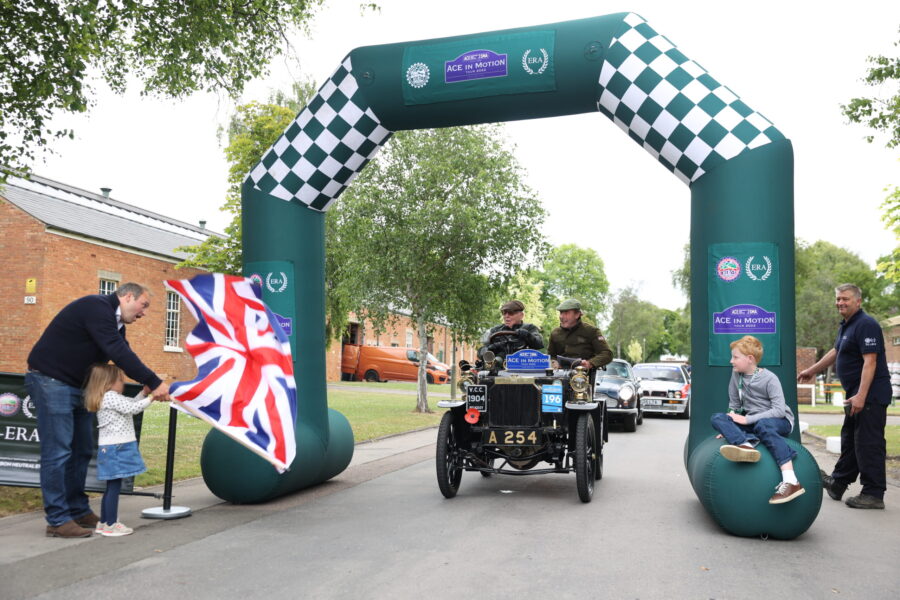 From starting under the HERO-ERA arch at Bicester Heritage, to the last run of the airfield test track at the Bicester site, there were smiles and excitement all day as 38 crews savoured a special Oxfordshire tour. It took in a visit to the Williams Heritage Experience and the Bicester airfield track, all to raise funds for ACE-SMA clinical trials. There was even more joy when supporters realised the amount they had raised by the end of the day.

Mike; “It was a brilliant day, it was a lot of fun. Everyone seemed to have a really fun time, a nice relaxed day, but some great people supported us, yes it was brilliant.”

Sophie; “Raising £30,000 pounds is incredible. We are so overwhelmed and blown away by everyone’s generosity, and it’s great to be able to have Professor Servais here to explain what the money is going towards. So it’s been a fantastic day all round for the awareness and also to raise money for the clinical trials.”

Mike, “We believe Professor Servais may have some additional grant funding which would mean we’ve got enough money to kick the whole thing off. It makes it much easier to gather momentum.”

Sophie; “Maybe the whole thing will happen sooner which is fantastic. So this has taken us to the next stage, yes this has really taken us up to the next level with the possibility of more children for the clinical trials, rather than 20 maybe 40!”

Mike; I think it’s probably inevitable now that we will get involved in classic rallying, I think that will be with Sophie’s agreement – she enjoyed the navigating, so it’s perfect!”

“It’s fantastic, just to be with real people’s eye link, people with three dimensions, we were not used to it as we have had to hold all these zooms. I’m so happy to be here and to feel like part of the community.

“For the funding go ahead you have to have the bacon on your plate, so that’s exactly where we are now, we need to have a budget confirmed so that the universities can tell us they are happy and I’m happy. We want to move ahead with a trial so this is why it’s a very important day today, because it helps us to go to the next stage, which is to get sponsored approval and to move one step ahead for patients.

“When you think of these cars, they are fantastic so beautiful, and they have helped raise money!”

“I think it’s important to show that actually those who have a big passion for classic cars also have the desire and the will to help where necessary and whatever parts of society. This is a particularly great cause because of course ACE means, awareness cure and exercise, it is all about mobility. So ACE, links nicely to what we do, you’re an ace driver of motion. We’re all about mobility ourselves. We are delighted with today, the money raised and to see everyone so happy and enjoying themselves.”

There was an eclectic mix of magnificent motor cars spanning every era of motoring on the ACE in Motion Tour, starting with the oldest, a Peugeot from 1904 right up to a 2016 Porsche GT3. The mix of cars proved to be quite a sight on the country roads of Oxfordshire as small groups of spectators gathered in some villages to wave and cheer the tour on as the crews in turn waved enthusiastically back.

George, “We did have some issues!  We had a problem with the inlet valve, it’s an atmospheric valve and the car just stopped but we weren’t sure what was wrong with it, we thought we’d run out of petrol but we had no spark. We found out that the inlet valve had dropped inside the engine, but we managed to get it out again and get it fixed and get back!”

Angus; “ And we did that with a Swiss army knife plus one wrench. Pretty good. But we are drenched, we are absolutely soaked through. In the last 20 minutes on the way back, the heavens opened!”

“I absolutely loved it. We had an all girl car, we were all in yellow, we were even wearing yellow sun glasses, although there was not much sun, but it was a great experience. I really was not expecting such a great day. I think we may have started a small spark as everyone in the car loved the experience, so you might have more females wanting to go rallying soon!”

“I think I have to be honest that I get better with the more experience I have as to how rallies work, and the fun that you have. Then seeing a few more friendly faces that I’ve met before, so it is great fun, Peter has really been enjoying it too, he can’t take the smile off his face!

“It is wonderful to put on an event like this with so many supportive of the charity that Mike and Sophie have set up, it is amazing. I’m blown away with how the progress has been for Anouk. Since I remember when she was very young and had just had the diagnosis, to now with this progress it is amazing. It shows where the money is used and how well it is directed, it goes into some amazing causes, and it really changes people’s lives.

The first highlight for the teams was the visit to the Williams Heritage Experience at the F1 team’s Grove HQ in Oxfordshire on the day that Williams Racing were battling for grid positions at Silverstone in the British Grand Prix. The Williams Heritage Experience Centre houses some very early Keke Rosberg 1980’s F1 cars through to a 2014 Martini Williams Mercedes. There is a superb display of Williams GP driver’s crash helmets over their impressive history during which time they achieved seven World F1 Drivers and nine World Constructors titles. The ACE in Motion Tour visitors were enthralled.

Barnaby; “It’s a shame because I would have loved to have seen all the GP trucks but that’s just me and I want to get the full f1 experience. But it’s extraordinary, I mean, it is a shame that they’re all at Silverstone today but it’s better for us because there’s less people milling about!

“Williams, what a team, I’m just looking at all the heritage here with the old ground effect cars, the six wheeler, which was actually a technical innovation, but it took too long to change the four tyres at the back, and that’s when they dropped the idea!”

Lottie; “It has been a really great first experience, doing a bit of touring come rallying for the first time. I’m finding it great fun, a nice kind of easy and gentle way to get into the sport.”

David; “This is fantastic at Williams, as someone who’s been f1 obsessive since I could almost walk, it’s fantastic to get a look around this collection. They’ve got so many cars that bring back so many wonderful memories of camping out in the sunshine at Silverstone years ago.

“It’s great to be able to do a good thing for a very worthy charity. But also I think it’s a great way to bring other people like Lottie in. Just to get them out on a gentle tour that’s not too forbidding or anything and so hopefully, we’ll have a whole load of new competitors.”

The event received fantastic support from Boodle Hatfield, Motor Sport UK, Hangar 136, the Department of Paediatrics, Oxford University, NET-HERO and Bicester Heritage. There were a large number of young team members taking part in their first historic car event, none more so as exemplified by the Bicester Heritage Starter Motor entries of young apprentices. Adam Townsend and Lewis Revell were driving a 1981 Porsche 924 with Philly Futter and Magda Zebrowska in a magnificent Jaguar S Type.

The most beautiful entry for the tour was a 1933 Bugatti entered by Stephen Gentry navigated by the youngest team member, ten year old Dylan Morrison.

Stephen explained a little about the car; “We bought along the Bugatti early Type 57 from 1932. We restored this car six years ago for an English client who uses it for lots of Concours events. It’s a series one, so it’s a 3.3 litre eight cylinder twin cam engine with a four speed box, a phenomenal car, 120 miles an hour. It’s certainly been keeping up with all the rally cars today, but the roads are a little bit bumpy for us!”

The final treat in store for the tourists after lunch back at the HERO-ERA HQ, was the rare invitation to exercise their cars on the Bicester Heritage test track alongside the airfield. By now the rain had taken hold and the course was wet but that further fuelled the crew’s enthusiasm as both the Thomas Cabot and Rollo Gwyn Jones’ Morgan 4/4 and the Porsche GT3 of Tom Sloan and Cameron Ferguson enjoyed lurid spins.

Charlie Andrews, crewed by his young navigator and daughter Jocamanda, had been unable to use his Lagonda for the event but was loaned the Arrive and Drive MGA instead. Charlie really threw the MG about although the screams from his daughter could be heard above the engine from the other side of the airfield, although not surprising really as he had also just indulged in a big spin!

All this in front of the tour viewing area for spectators and crews who had finished their laps of the test course. The cheers from the growing crowd trackside meant that teams taking their second or third runs were trying that bit harder. James Middleton took ACE Charity founder Mike Howes for a run who said just before the start; “ I am here against my will you know!”

A great day of fun and fundraising ended with some going to watch the British Grand Prix qualifying which was being shown live in the Wriggly Monkey Brewery on the Bicester Heritage site. It ended with a very satisfied Tomas de Vargas Machuca and event organiser Carly Morrison, both smiling like everyone else, not because of the test track excitement, but because all their hard work had resulted in a very enjoyable tour that raised a great deal of funds towards the vital SMA Clinical trials. 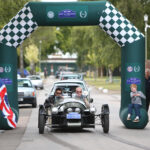 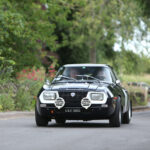 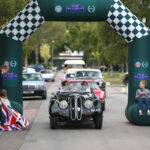 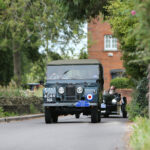 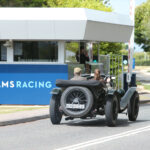 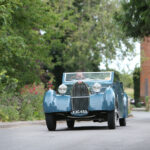 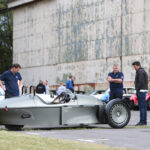 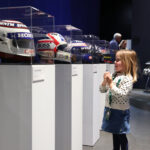 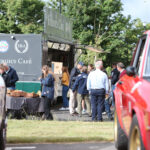 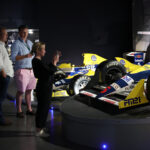 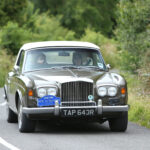 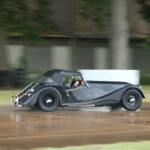 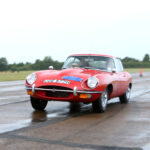 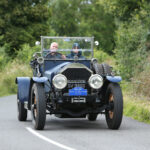 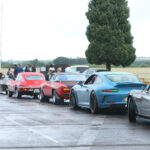