The Blue Train Challenge is an imaginative new Endurance Rally Association event from the same thoroughbred stable as the highly successful Flying Scotsman and Alpine Trial.  Designed from the ground up for enthusiasts with pre-1948 Vintage and early post-war ‘Riviera Sports Cars’, the Blue Train will re-capture that nostalgic 1930’s age when pioneering motorists set out to beat the famous Train Bleu on its journey across France from the English Channel to the Cote d’Azur.

Click the image left or the links below to find our current and earlier edition Blue Train “L’Express” newsletters written to enhance the flavour of what’s in store for participants. Keith Baud, the Blue Train Challenge joint Clerk of the Course and route designer is something of a Francophile with a fondness for the quirky and the unusual. In our latest edition “L’Express” newsletter Keith recounts the remarkable, almost unbelievable, motoring story of French restaurateur Francois Lecot.

Following numerous requests from owners of 1950s and early 1960s sports cars to be part of the inaugural Blue Train Challenge, we are now giving them the opportunity to enjoy the driving experience and participate for their own “Riviera Cup” trophy on this exciting new event.

Keeping with the original vintage car ethos of The Blue Train Challenge, only limited entries are available for appropriate “Riviera Sports Cars”. As such, the organisers will consider applications for sports cars, manufactured between 1 January 1948 and 31 December 1962, which would have graced the French Routes Nationales on their way to the Côte d’Azur.

Encouraged by the quality of the pre-1948 vintage entries received to date and responding to enquiries from owners suitable later cars we believe that the addition of these “Riviera Sports Cars” can only enhance the appeal of the Blue Train Challenge to competitor and onlooker alike.

In a contrast with the ERA’s longer events, the Blue Train fits comfortably within a week without diluting the enjoyment and sense of achievement.  From the Deauville start we enjoy five days of enjoyable motoring to the glittering Mediterranean. Along the way sporting action is provided with regularity and time control sections – navigated by way of easy to follow tulip instructions and marked maps. Special tests on private land add spice to raise a head of steam and., as ever, the ERA’s legendary sweep mechanics will never be far away to help overcome any mechanical difficulties.

Driving a vintage car across the length and breadth of France should be a pleasure to savour. The Blue Train route will be competitive without being too demanding for Vintageant cars.  The daily schedules will provide plenty of time to enjoy the experience, and soak up the atmosphere at carefully chosen coffee breaks, lunches and overnight halts.  From the Deauville start we enjoy five days of enjoyable motoring to the famous Cote d’Azur.

In an age before autoroutes and budget air travel, Le Train Bleu, the luxury overnight express from Calais to the Mediterranean, epitomised the civilized way for travellers to exchange the gloom of the British winter for the glamour and sunshine of the French Riviera. This combination of luxury train travel and the Golden Age of continental motoring was the period that gave birth to the ‘Blue Train Races’ when a number of motoring pioneers raced the train on its journey across France.

The most famous of the Blue Train races was the record breaking drive by Bentley Chairman and Le Mans winner, Wolf Barnato, in March 1930. However, the first bids to outpace the train were actually made by Dudley Noble in a Rover Light Six, just two months earlier.  Noble was thwarted on his first attempt, but a few days later he tried again and beat the famous train by 20 minutes! It is these heroic drives by Noble and Barnato that the Endurance Rally Association celebrates in this week long motoring adventure in September 2017.

Potential participants can be assured that The Blue Train Challenge will be carefully planned to be suitable for the specific needs of driving a pre-war vintage car, and organised with the same attention to detail that the experienced ERA team have used to bring you the very best in vintage and classic rallying for the past 25 years.

The Deauville start is conveniently situated for cross-channel ferries from the UK and is an easy drive from other European countries. If time or inclination preclude you driving home, one of our car transport partners will be able to help or perhaps it may be possible to return home by Motorail from Nice. The entry fee includes six nights in the best hotels available, all meals including the Gala Prizegiving, Rally Plates, Routebooks, Awards, and the services of the experienced ERA Team including mechanical back-up, doctors and marshals.

To find out more please call Annette, Eleonora or any of the Rally Office team or email us for your copy of the event brochure and entry form. We’ll be happy to answer your questions and offer any guidance you may need.

In the 1920s and 1930s, heyday of the legendary Train Bleu, motoring the length and breadth of France was an adventurous undertaking and one to savour. The route of the inaugural Blue Train Challenge recaptures that nostalgic age of travel with an exciting five day journey of discovery. While not religiously following the tracks of the original Blue Train, our route planning team of Keith Baud and Anthony Preston have combined some of the most beautiful and spectacular landscapes with a fine selection of driving roads and venues to provide the perfect blend of competition and adventure.

The event begins in Deauville, just two hours from Paris, and with easy access from the UK. With its film festival heritage, opulent marinas, fine villas and sumptuous hotels, Deauville is one of the most elegant and exclusive resorts in France and provides the ideal and relaxed start location for the Blue Train Challenge. Our pre-event base at the luxurious and spacious Hôtel du Golf, part of the prestigious Barrière Group, is conveniently located a few minutes from the heart of the town.

From the Start in Deauville, the route south uses quiet country roads to explore the orchards of Calvados. It then motors on into the Alpes Mancelles, a beautiful area of quaint stone built villages more like the Cotswolds than the Alps!

We then make for Le Mans as no motoring journey through this part of France would be complete without a visit to this famous circuit. Fast traffic-free roads then speed us south through the afternoon to the Loire Valley, and our end of the day at Fontevraud l’Abbaye.

After the excitement of the first day, a night at Fontevraud offers an incomparable experience. Not only was the abbey once the largest in France, but it was founded by Henry II, and his wife Eleanor of Aquitaine – Plantagenet King and Queen of England. A very special place… 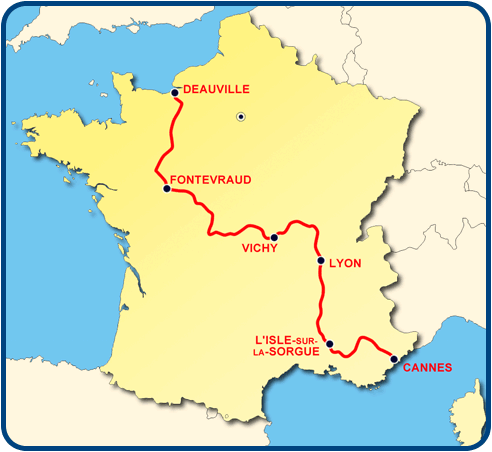 A longer day lies ahead as we follow the rivers Vienne and Creuse across the empty heart of France. However, fast roads allow good progress, so there should be time to enjoy some of the beautiful chateaux that pepper the landscape in this part of Anjou.

The planned lunch stop is at a private race circuit before we continue east into slightly more hilly terrain. This is the northern edge of the Massif Central, an area of dramatic volcanic peaks. The twisty roads here provide the first real driving challenge of the event before you slip into the spa town of Vichy, a welcome meal, and your bed for the night at the fine Hotel Celestins and Spa.

It is not a great distance from Vichy to Lyon so today’s run is relatively relaxing giving us the chance to explore the wooded heights of the Monts de la Madeleine before we re-cross the Loire and head into the hills of the Beaujolais.

After lunch the route takes in some interesting roads before crossing the Saône and an afternoon regularity or two leads to the day’s final checkpoint at a fascinating motor museum in an 18th Century Chateaux. Of 150 vehicles on display at least 21 are unique in the world. From the museum a short untimed run takes us to our overnight hotel where the reception area alone tells you that this is another rather special place. The hotel is in the oldest part of Lyon within a short walk of the Roman Amphitheatre and the magnificent Notre-Dame de Fourvière.

An early start may be necessary to pack in all there is to enjoy on today’s journey to Provence. Once clear of Lyon, we climb the flanks of Mont Pilat and then motor into the remote hills of the Ardèche, which has been a heartland of French motorsport for many years.

After crossing the mighty Rhône south of Valence, we enter the Drôme, a landscape of sun-bleached hills, rocky outcrops, vineyards and your first lavender fields. Still undiscovered by many, the Drôme is how Provence used to be before mass tourism…

Looming ever large to the south is the brooding mass of Mont Ventoux, a fabled mountain revered by cyclists and motoring enthusiasts alike. The views from its 2000m high summit are staggering; the snow-capped Alps to the north and east, and the shimmering Mediterranean to the south. By the time you descend from Ventoux you will be ready for a relaxing drink on the terrace of your hotel overlooking the clear, babbling waters of the River Sorgue.

The final push to the Cote d’Azur. East of L’Isle-sur-la-Sorgue, a string of pretty Provencal villages lie along the southern edge of the Plateau de Vaucluse. Ancient stone walls divide sun baked fields of olive groves and apricot orchards, colours vivid in the clear bright light so beloved of artists past and present.

Once across the Durance, vast lavender fields stretch to a horizon edged with the jagged peaks of the Alps. After skirting the impossibly blue waters of Lac St Croix, the route plunges into the Grand Canyon du Verdon, the second largest in the world. A 30-km drive along its very edge and over the limestone plateau of the Plan de Canjeurs finally brings you to the more familiar landscape of the South of France; ancient perched villages, expensive villas, and the journey’s end in Cannes – where Woolf Barnato’s legendary race against the train began 85 years ago.

Our French agents are already busy making arrangements for the Grande Arrivée on the famous Croisette, with a Gala Prizegiving at the Grand Hyatt Hotel Martinez where you finally lay your heads after a memorable weeks motoring.