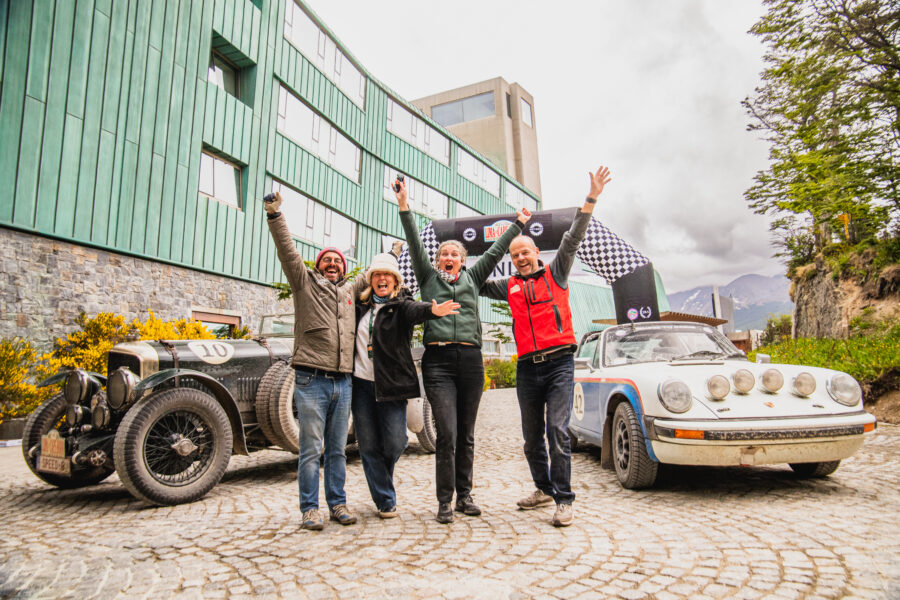 The inaugural Lima to Cape Horn Rally has reached its final destination in Ushuaia. 30 days since departing the Peruvian Capital city of Lima, 39 cars rolled under the finishing arch in Tierra del Fuego, and at the end of it all it was the Bentley Speed 8 of Herman Wielfaert (BE) + Katrien Tremerie (BE) that triumphed overall.

Speaking of their victory Herman had this to say “Glad to be here {at the finish]. It was a very tiring rally, being outside in the car, there were huge winds and temperature differences, so we are glad to be here and achieve this”

In second place were newcomers Mark Oates (GB) + Catherine Fielding (GB), jumping at the chance to pick up the reins to Andy Scowcroft’s 1936 Chevrolet Fangio Coupe, when Andy was unable to attend. This is their first rally and the pair have plugged away with good humour as they have learned the ropes and will no doubt be back for more.

Third place was occupied by Tim Eades (US) + Jim McLaren (US) in a Ford Cabriolet 68, the 1936 machine overcoming many mechanical difficulties to reach the finish.

Adventure and Incident Over Incredible Distance

11,500 km have passed under the wheels of those who have made it to Ushuaia, and during that time this rally and its competitors have certainly experienced their fair share of trials and tribulations. There have of course been the usual mechanical grievances that are part and parcel of an endurance event such as this, but the mechanical assistance crews have worked harder than usual to keep machines going, especially after such a tough and steep climb into the Andes early on in the rally.

There have also been plenty of unforeseen events thrown down by the rally Gods, including protests in Peru that saw the rally stuck in Ayacucho for 24 hours longer than expected and required competitors and crew to leave under cover of darkness in the middle of the night, with Police assistance. It has certainly been an adventure.

Along the way the route has travelled through Peru, Bolivia, Argentina and Chile, and during our traversing of the length of South America we have climbed the colossal Andes Mountains, descended through breath-taking valleys, driven on the world’s largest salt flats and explored the vast Patagonian wilderness, as well as experiencing the chaos and colour of some of South America’s busiest cities and most remote settlements.

As well as the ultimate winner, in an event that could only be won outright by a vintage machine, there was a fierce battle for the overall victory in the classic class. This extremely competitive category, that included no less than 9 Porsche 911’s, was easily the most engaging competition of the month and was fought tooth and nail until the last between Filip Engelen (BE) + Ann Gillis (BE) in their New Zealand Classic winning Porsche Targa 911, and Bertie van Houtte (FR) + Charlotte van Houtte (GB) in their older 2.0l 911.

Neither gave any quarter and until a mistake on a regularity a couple of days before the end there was nothing to separate the cars, but ultimately first place would go to Filip + Ann, with an emphatic Ann celebrating through the roof of the Targa before the car had even passed through the finish arch. Ann had these words to offer on their victory “We’re really pleased. It was a stressful finish as we were worried about our throttle cable that had broken on a test, but the sweeps did a brilliant job and it held until the finish, we are very happy.” Philip added to Ann’s words by saying “We had an epic rally, but we have to be humble, as everyone deserved a trophy.”

In the end second place in the category went to car 29, Roy Stephenson (GB) + Peter Robinson (GB) in the Silver Datsun 240Z, with Charlotte and Bertie dropping to third after a spin on one of the final tests of the competition.

Me, Myself and I as Vintage Driver Completes Incredible Solo Rally

Many crews have been on their own individual journey on this rally, and for many just getting to the end became the chief goal. One person that deserves a special mention though is the driver, and navigator, of car no 9, Manuel Dubs (CH), who has taken on both roles simultaneously during this rally after his navigator was forced to pull out shortly before the event. He has completed the rally in his ever-reliable 1940 Ford Coupe and the car has not missed a beat, and neither has Manuel and he unofficially finished as the first vintage car home and fifth in the overall leader board. But for the regulations he would have won, and he has shown just what a vintage car can do, excelling at every challenge passed his way.

He has certainly won the peoples victory and given more than a few navigators cause for thought, as he has mastered both the driving and the directions on a route that demands maximum concentration from each role.

A Route to Remember for Clerk of Course Chris Elkins

One aspect that stood out on this rally was how incredible some of the roads were, and for route planner turned Clerk of the Course, Chris Elkins, the quality of the route was key. Speaking at the end of the event he had this to say. “I hope that people will take away some fabulous memories of some of the places we have seen. We have travelled through a huge part of south America in 30 days and experienced more of it than many would in a lifetime, the scenery here is some of the best in the world and I’m sure will live long in the memory for everyone involved.”

To the victor then the spoils, but for all who took part there are the memories and experiences of an incredible adventure through a part of the world that is, except for some parts of Argentina, still largely untouched by the west and offers the adventure traveller a unique experience. It has certainly been tough, with all of the elements of an endurance rally present as well as some unscripted components, such as the escape from Ayacucho, that have added extra spice to proceedings. Now though it is time to put that route books away and celebrate the achievements, before we all go our separate ways. Lima to Cape Horn, a rally that will live long in the memory.