Paul;  “It’s been okay. We’ve been a bit slack here and there so it wasn’t our best morning but we’re working on it, we are in with a shout – we’re in in the fight so yes we’re doing okay.”

Ali; “The navigation was relatively straightforward but just some early nerves and little mistakes, nothing we can’t correct.

Paul; “The MG is up to it but it’s certainly not a Bentley with 230 horsepower! But it depends on the tests, some of the twiddly ones we might do okay. The power tests like the airport I think we might struggle but we’ll see.”

Martin; “ It’s been going very well. I was slightly, what’s the word, heart in the mouth, when I saw the weather forecast last week! We arrived last night there was snow falling I was thinking my goodness, how are we going to deal with this?

“But actually this morning has been fine, there was snow on the car, it was chilly but we were going quite well. I’ve had this car a few years now and competed on the Scotsman probably for the last four or five times. Okay it hasn’t had a great reliability record, so we’re slightly fingers crossed and hoping this year will be the year that it makes it without a breakdown.

“Yes son Theo and James Galliver are back in the chain drive car, but they had a tough morning, so it’s not going to be plain sailing to the podium this time.”

John “Yes, it was good day. It was really nice morning, lovely sunshine and great roads. Fantastic route I thought, particularly earlier on in the day and yeah, the tests were very good, nice regularities too, we really enjoyed ourselves today. Hopefully it will get better!”

Niall; “ Yes, it was good today. We work together pretty well as a team, we’ve done quite a few rallies together. It’s just that with these old girls, it’s hard getting them around some of the tighter corners, it is a bit of a challenge! But I think we did pretty well today although we got a bit leery on one of the tests. You ask me which I prefer, running in vintage or classic, now there’s a question! If it’s first thing this morning when I can’t feel my hands then definitely for the classic stuff. But you know, once we you get into the bar after and have a few beers, and you think back on it, the vintage stuff is just so great, it’s just really different and a bigger challenge than the classics.”

John was asked, when it’s really really cold, does he ever think, ‘why am I doing this in an open top car?’ “No, not really, very rarely. I’ve done quite a few winter trials in the snow, when it’s been minus 25 and that is a bit of a challenge but it has been cool. I seems quite cold now and again, but not unbearable. If you’ve got gloves and neck warmer and stuff, it’s just fine”.

Niall; “I think we were about 10 seconds behind Andy and William at lunchtime. They’ve got a very quick car so we’re dropping a bit of time on the tests to them, but we’ll be happy with anywhere around a top ten finish. That’s what we’re aiming for.”

Robert; “The car didn’t have a a great run, we were in limp mode from lunchtime really, very limited. It’s been a bit tedious also having to short shift but it’s been a lovely day. We’re just going to have a crack at fixing it tomorrow, even if we have to spend the morning trying to get it fixed. We will probably have to miss the morning and then catch up at lunch. As soon we can get it fixed which we will just rejoin basically. It was a nice route and straight into Scotland, great as always with some empty roads. It’s a pity because when the car was on song it was moving along very nicely, but yeah, it’s just been a tough afternoon.”

Angus; “By comparison with Robert, little George behind us has gone really well. Actually, I mean getting up this morning and there’s a light dusting of snow across the entire car but the snow ran off the headlights for about 20 minutes as it started melting, but the biggest issue was it was dropping off the trees and hitting you in places as you were driving, hitting you in the face, which was very unpleasant. The car worked really well today, and  we’re very happy, it is lovely to be here in St Andrews.”

Marcus; “Little George has been running exceedingly well. It’s been looked after by the guys at Blue Diamond and John Lomas and his team have got the car absolutely sorted. So it’s running very smoothly. Angus is driving it really, really well, but it is quite challenging because it bounces around on the road so much, but it’s great. We’ve had a really good time and we’ve really enjoyed day one.

“When we were going as fast as we could along the A roads, we got oil from the engine pouring into the footwell, so the faster we’d go, the more oil came out, on my side. So when we were on that route around the A90, even my route book was absolutely splattered with oil, all over the place, everywhere was lubricated with my feet sliding all over the place! But you know that’s all part of the part of the charm of the car!”

Philip; “We’ve been chopping and changing throughout the day and enjoyed some exciting tests. We are taking things steady, the cars is fine but I don’t think we are really doing it justice. It should have a far more competitive team doing something a bit serious in this car, the Riley MPH, which is like a bomb, it’s fantastic.

“It is the only one in existence and was the prototype. It was gunned around by George Easton in the day, then Raymond Mays got his hands on it and supercharged the car, now we’re in it, it is so amazing!”

Paul; “I’m just going for it, so far so good, it’s been absolutely brilliant. What an experience, nobody told me it was going to be like this. And what a contrast from yesterday, it’s so different.”

Iain; “Its good, I’m enjoying it.  We’ve been fortunate that the weather has held off, it’s been a little chilly but we’re ready for that. I am impressed with Paul’s driving too – he is doing a good job.”

Hank, enjoyed the morning and the sunshine. Hank; “ It’s wonderful after the snow this morning, when you started it’s fantastic you didn’t expect this after yesterday which was pretty bad.  Yes, so I thought it’s going to be a cold day but it’s actually really good, super.”  Hank was dressed in his big mohair coat and a tartan cap sitting waiting for his wife to arrive with the time card, he was looking relaxed with a cigar cranked up as well. “You have to enjoy life a little bit don’t you?”

Stephen; “We started okay but it was very chilly, there was quite a lot of snow coming down when we did the test but it was a good place. It was a quick test, a nice test to start off with then we were out onto the regularity which was a good one for us as well, nothing too tricky. But to keep to the time as well as it wasn’t as easy as we thought it might be. But yeah, a good start.” 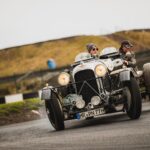 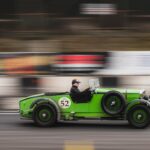 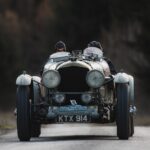 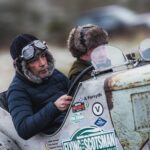 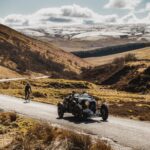 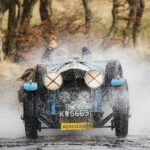