William: “It’s just about taking the smallest mistakes possible. Like yesterday, there were a few close moments so we are looking at damage limitation today, especially as the car has been sold and has to be delivered on Wednesday.

“On day one it was flying, but in a way it’s good to give the car a final shakedown before we deliver it on Wednesday. It puts a little bit of pressure on us to make sure there is no damage!

“Well, it is still quite tight at the top, it’s still anybody’s. Yesterday lunchtime 20 seconds covered the top ten cars. This is always a fiercely competitive rally, highly coveted. Many want to win this one but it can all go wrong very easily as well. We know that from four years ago when we didn’t finish.

“We’re winning some and losing some but I think overall it was about probably about the same as this morning but very challenging. The route is fantastic and the weather just got better. We had to pull the brolly out of the side of the vent only once.

“My highlight of today was this morning over the TC section at the old naval station. The airfield there was just insane, the Bentley was very fast, it seemed like we were using just every inch of it.

“And despite Paul Crosby having to retire with his differential problem, it’s still tight at the top. There’s nothing in it, I think, there could only be 20 seconds or so. You’ve only got to come across a van or something in the regularity and it’s game over.”

Andy; “It was a little bit of mixed bag today, but it was another great day in terms of really great scenery. I have done the Scotsman six times and I am still discovering the roads in Scotland. We had great sunshine, it only hailed very briefly which is nice.

“I’ve been a little bit sketchy with some of my regularities here and there, I could have have done a little bit better. Fortunately, William’s driving made up for most of those slight inaccuracies.

“Now we’re getting hunted, I think that is the best way of putting it at the moment as to the pressure from behind us now, which are closing us down rapidly, I think we’ll have a good battle tomorrow.”

Martin; We are very happy with second overall, although I think this is much to my surprise. It is the highest we’ve ever been and it’s taken us 10 years to get here.

“We didn’t do the very first one and Bob has been my navigator on every single one. We’ve lost through a mixture of factors. The car broke on three of them but also Bob lost the way!

“I don’t think we will be able to catch William, he’s got a supremely strong, quick and agile Bentley. And obviously he’s a fantastic driver and he’s got the one of the best navigators out there. So we’re not even going to aim at him. We’re just going to do what we do and try not to get lost and hope we don’t break the car.

“But Theo is doing quite well. They dropped some time this afternoon and so they’re both kicking each other. I think he’s probably in fourth place, I’m not sure. But he’ll have to have a bit more good luck to get him back on the podium.

As Martin watched his son preparing and checking his car for the final day in the rally park at Aviemore, Martin confirmed that Theo has always tinkered with old vehicles alongside his learning skills.

His Frazer Nash car was in a rally last weekend it is obviously rallying this weekend and it’s racing at Goodwood in the Members Meeting next weekend!”

Theo; “that test in the morning was pretty difficult. It was pretty hard to get on time, we were flat out for about eight or nine minutes, I think nine minutes. Anyway It was a long time and it was pretty hard on the car, but we lost a bit against the top guys there but not too much. The rest of the day has been pretty smooth until the last regularity where we had a slight hiccup in the timing but otherwise we are here, smiling and drinking a beer!”

James explained what happened on the last regularity; “I think it was that last regularity. We went on to lose stuff, I think we had just passed you and it was going really well. We were one second out. And then for some reason I started reading the wrong speed table, I told Theo to go at 30 miles an hour rather than 20 miles an hour, which meant we were 20 seconds early, which is not fantastic”.

Theo; “I was hammering it down this road and he was saying go faster go faster, and we weren’t making up the time, we got the checkpoint but it was too late. We were early so we got a 20 second penalty, which isn’t terrible considering we can try to make up time most of the speed tests.

“It doesn’t sound like a lot but in this competition, which is so tough, with some guys that just don’t make mistakes, it is a lot of time and we will struggle to pick it up tomorrow”

Theo was reminded that he still has his father ahead of him in second place, which has to be big bait surely!

“We are unfortunate that our mistake has left his lead a bit unassailable. But yeah, we’re looking at what we can do. We’re eyeing up the back of his car as well, maybe we can beat him on the speed test tomorrow. This at least will give us some kudos later!”

Theo and James closed by saying they would try their hardest to get back on the podium because it was much celebrated in 2019. A repeat is possible, and they both still hold the youngest ever podium sitter awards for an ERA event.

John had been trying to get out of the time control this morning but found his way blocked by the media team interviewing Theo Hunt. As he squeezed through in the Lagonda he nudged Theo’s right front wheel. John;” Yeah, you were in the way I’m sorry. I wasn’t really expecting it from you guys, but I did apologise to Theo!

Niall; “I think we’re seeing consistency, overall we are pretty happy with today and the final day to come. Yeah, it’s been gorgeous of course right this day, we are just so happy with everything, it’s been good. We’ve had some good tests and a lot of fun run the Time Control section this morning.

“John has managed to get the hang of the car again after three years out of it. So it’s been good.”

Elise; ”It’s absolutely amazing being in Betsy I never realised how challenging it was going to be not having a windscreen, it just makes everything 10 times harder but so much more fun.  I’m hanging on. I’m hanging on to everything but it’s a good laugh.”

Bill lost his trademark black leather hat. Bill: “I know, it’s dreadful, I nearly went home but someone’s found it on the roadside and emailed the organisation and very kindly offered to post it to my home address which is marvellous!”

Today brought some mechanical problems for the crew. Before checking on previous troubles and woes, Elise was asked how was that forest regularity as Betsy suddenly appeared at the end?

Elise; The forest was a beautiful forest. We spent a lot of time in that forest. Oh, yeah, probably about an hour!”

Bill explained; “Earlier this morning, we smashed the track control arm section and had great fun, then we went to do the test and we broke our trailing small radius arms. But we found a welder. Well, we didn’t, we found someone with welder, Matthew Avery very kindly helped us and we welded it up as best we could. We thought we were on our way… We did two hours straight to get to the forest, then it went again, so we waited for a very nice man to come and help us out again! But as Elise said, we are just laughing most of the time now!”

Tony “I think we’ve had a better day.”

Tony; “The ERA format is slightly different than the HERO events we’ve done in the past. So we got caught out by a couple of new map applications, but actually there are a lot of fun. And once you get to read all the detail, it’s actually a great way to make a great format.

Hugh; “I’m 14, but if it’s a record that’s great. We were told on the first day that it was quite a competitive, not competitive, but quite a complicated event. I feel like we’re doing quite well,  so we are happy about that.

What about the weather conditions? been quite cold, isn’t it?

“I’ve got three jackets on”.

Tony explained that the Nash came all the way from from Australia.

“I was looking for a car to do much longer distance events, maybe even a paid a fee one day. Dave Smith, who everybody knows, said buy something old and American, they’re bulletproof. So that’s what I set out to do. And when this came about a year later, it came up at auction. It had been owned by a district nurse in Western Australia and spent the first 50 odd years of its life over in the West. So it’s fairly rough though and then went through a couple of museums. So we’re lucky to have it as it seemed very original and it’s actually pretty effective”.

Hugh is on school holidays right now from his new school in Sheffield. Father Tony said he did a great job and asked him to keep it going in that final day.

Hugh; “Hopefully we can do better than today!” Tony; “I don’t want to mention any names, but he’s way better than some of my previous navigators!” 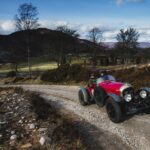 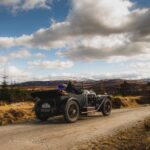 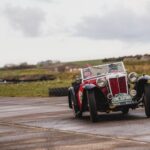 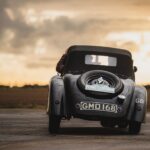 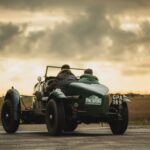 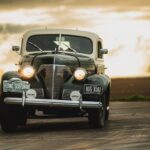 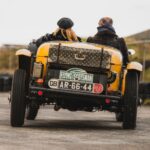 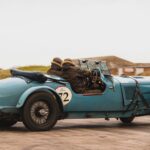 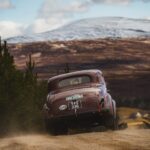