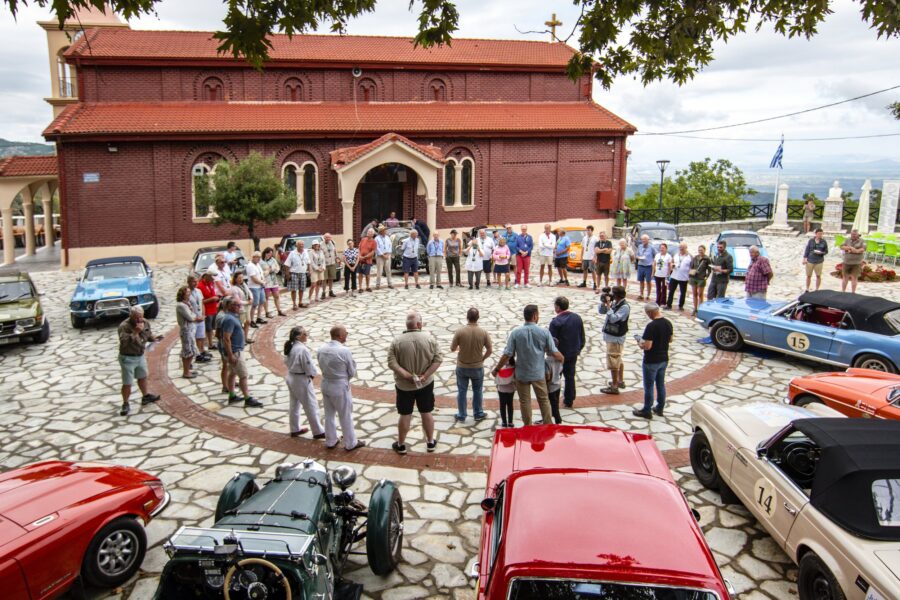 The looks were a mix of surprise, almost bewilderment, relief and nervousness as faces turned to the sky but the unanimous verdict was obvious to the the crews of the Temple Rally …..it was very definitely raining in Greece.

Days of enduring searing heat which turned most of the closed classic cars into mobile ovens as they come from an era when air-conditioning was either rudimental or in the style of opening the window were over for now.

A breeze, grey skies, clouds and the precipitation signalled a change of conditions which was generally welcomed but it also meant that the longest day of the HERO-ERA Athens to Rome event would come with more risk, an element of luck would be required and a definite nerveless, can-do attitude from the drivers.

Between the start in the mountains at Delphi and the end of the day 5 when they sat down to dinner in a seaside village, the crews had to cover 350 miles to eventually reach the port of Igoumenitsa to board the overnight ferry to Brindisi in Italy.

The predicament on most minds was that the opening regularity was being staged in the Mount Ti National Park which includes the ski Resort area and at 3200 feet the conditions created challenges of vision and grip. As the rain peppered windscreens and the open-top competitors slipped into their all-weather gear, the cars disappeared into the clouds.

The overall leader board later showed very little change and was a credit to the crews and the organisational skill of the HERO-ERA team on the long distance rally.  The speeds in the regularity test were reduced slightly to cope with mountains roads whose make-up with rain on top became as slippy as oiled linoleum.

Throw in uphill and downhill hairpins demanding delicate braking and requiring precise engine power being applied or eased to avoid hitting either the rock face on one side or the long drop on the other and the requirement of keeping to the demanded speeds, 22 mph on one section, 26 mph on the other on the wriggly roads, with time controls at unannounced spots and it was a tough outing.

“A little slippy in parts,”said Andrew Laing who pilots the 1974 Datsun 240Z with his navigator Ian Milne.  “But it worked out for us.  In the past I have used harder wearing van tyres which are very hard and long-lasting. On this we fitted four-ply rain tyres and that definitely helped with grip today.”

For American Joan McCabe, who navigates for Karl Eisleben in their big-engined Shelby 350H which came over from Miami, there was a new experience for the long distance really novice. I hydro-planed for the first time ever. It was great. Something new.  But I have a great combination with the car and my navigator.  We are all in harmony.”

All came through unscathed and then it was on to Lake Plastiras, a beautiful spot for lunch but that came after a high-speed blast along the shores for the test. Yet again, it was Poland’s Tomasz Dzitko who powered his MGB GT fastest through the trees, so fast that when they screeched to a halt at the end, his navigator, wife Beata, rolled her eyes and said:”That was too fast for me.”

Penny Gale, navigating for husband Steve in their MGB GT, had a different  line as the car stopped at the test finish, she announced: ”Somebody enjoyed that” with a glance at the driver.  His response was to do the return trip over the 1.5 mile course, with Black Sabbath’s Paranoia blasting out to gee him up.

Daunted but not down, Beata was back in the car for the trickier return sprint on the same course after lunch and again Tomas outran the Mustangs and Porsches.  “I don’t know why I am quick, I never considered myself as so but when I got into these older cars, they suit me.  My hands tremble when we are waiting to go, but once we go I am calm and really enjoy it so much.”

That was the surprise and can-do attitude and next came the luck on the test which was muddier on the way back and slightly downhill. Few were quicker, perhaps slightly heavier after an excellent lunch, but two cars had off road excursions into the trees which could have been so costly.

First was the Mustang convertible with John Yates and Joan Gee on board.  “The car drifted wide just on the last bend and off we went,”said John. Somehow we got back out.”  Shortly after, it was the open-top 1934 Aston Martin of Nigel Dowding and Mary Antcliff which skated left on the right-hander and then shot into the woods.

“I could do nothing except hope that we would be ok,”said Nigel.  “Amazingly, we missed all of the trees, and there were plenty all around, and then managed to reverse out.  The car is absolutely fine. “

With the help of the local police who turned out to close roads and ensure the cars had absolute priority as they moved around the area, the next regularity was conducted in dry, warmer conditions.  And the reward was a scenic drive to a civic reception in the mountain village of Morfovouni where the mayor Panagiotis Nanos was waiting with a crowd residents to greet, meet and provide local food and drink.

Then came a two hour drive to the coast for a farewell dinner to Greece which has shown sights which most had never seen, particularly, the breathtaking Meteor monasteries perched atop colossal rocks which stopped many a rally car in its tracks, and a departure to Italy where the next leg of the 2500 mile adventure begins. 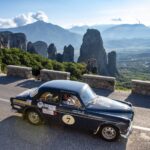 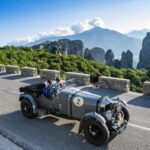 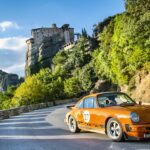 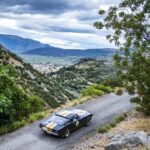 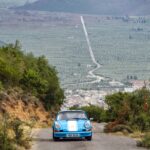 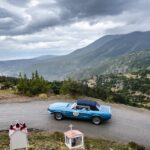 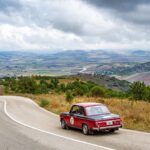 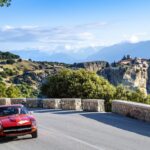 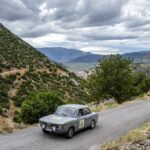