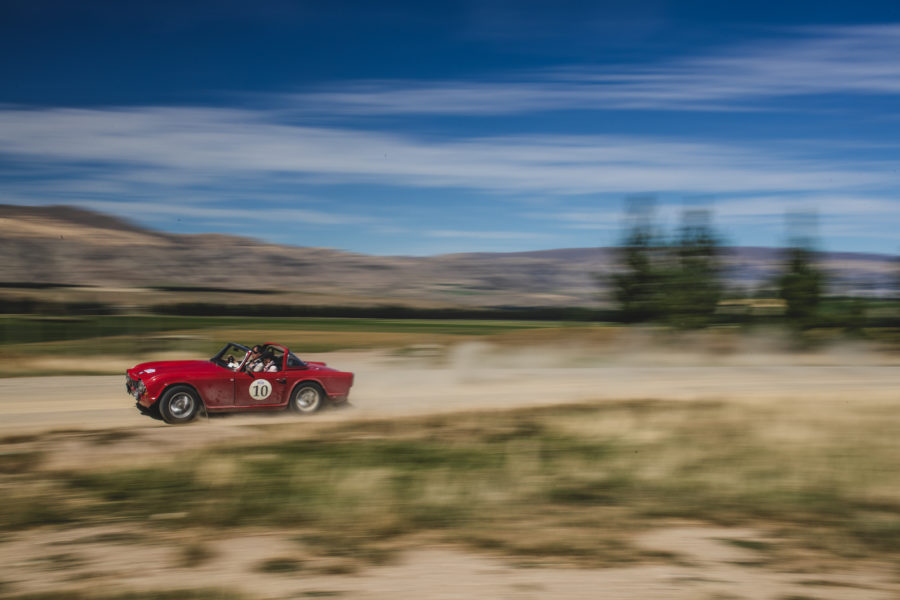 Following the postponement of the Peking to Paris Motor Challenge 2022 until 2023, the resultant calendar reshuffle has produced a compelling and busy international long distance programme for 2022 and beyond. This will include Japan in 2024 and India in 2025, whilst the shorter events calendar remains unchanged.

The new June addition for 2022 is the recently announced Trans Mongolian Motor Challenge, an 18 day endurance competition set in the remote and magical Mongolian Plains with 15 of those nights under canvass and the stars.

The traditional pull of winter rallying through South Eastern France across the Massive Central, the Auvergne-Rhone-Alps and more, has produced a sizeable entry already for the February Winter Challenge to Monte Carlo 2022. Ending on the infamous Col de Turini before descending into Monte Carlo for the finish, the rally action is all on French soil apart from the finish in the Principality.

From the snow capped Maritime Alps to the Spanish Pyrenees next in April 2022 as the London to Lisboa takes in the best of five countries. From the U.K. across France to some fantastic roads with altitude, in new venue Andorra, this medium range rally also visits Spain and Portugal. The event was a hit with competitors when it was last run in 2019.

The busy HERO-ERA calendar continues to provide variety with a medium range, slightly more sedate Temple Rally in early September. With classic and scenic routes starting in mythological Athens, working through Greece via Sicily before finishing with passion in Rome, the ancient capital of the Roman Empire will hail the rally legions after 13 days on the road. This rally genuinely runs from temple to temple.

A great and challenging route awaits adventure loving motorists keen to take on a desert challenge, or for Peking to Paris Motor Challenge contestants to shake down their cars for 2023. Starting in Spain, then crossing to Morocco, the Sahara Challenge is back through sheer demand after it nearly took place this year, not once, but twice due to the number of entries. Only geopolitics and the pandemic thwarted running at the last moment.

It is right to say that there is a lengthy and tasty menu of HERO-ERA rallies to choose from in 2022 and beyond. Whilst the HERO-ERA U.K. based headline rallies such as the RAC Rally of the Tests and Le Jog will wage competitive war over the length and breadth of the U.K. on their traditional dates each year, the Lima Cape Horn will wend an adventurous path through South America in October-November 2022.

From Lima the capital of Peru to La Paz in Bolivia, across the lands of ancient civilizations, the Incas to the Mayans, this incredible rally forges a path to the vineyards of Mendoza then follows the Andes south through Patagonia past glaciers and blue lakes to the tip of South America. There teams will reach the city at the end of the earth, Ushuaia, Tierra del Fuego. It is a fascinating route which may sound tough, but novice to expert crews are welcome as it is not only achievable, but it will also be a memorable experience.

From the mountains of South America to the most northerly desert in the world, the HERO-ERA organisation will continue to satisfy the most ardent adventurer’s motoring wanderlust.

2023 is the year of the postponed, and now eagerly anticipated 2022 Peking to Paris Motor Challenge, retaining its numeration as the Olympics did after a year’s delay. With a full entry and reserve list, the flagship jewel of a motoring challenge continues to attract entries from around the world. Such is its glittering adventure status there are already many expressions of interest for 2025.

The Classic Marathon series still evokes memories of the late, great Sir Stirling Moss competing along with other superstars such as Roger Clark and Paddy Hopkirk who were attracted to the rerunning of an absolute classic. Thousands of enthusiasts were equally enthused as they attended the 1988 Pirelli Classic Marathon start from London Bridge. In 2023, the 30th Anniversary Classic Marathon, a medium range rally, will continue to pull in the entries both famous and not so famous, this time in Croatia.

The Trans-America Challenge in September will be an epic journey from Houston in the Gulf of Mexico to San Francisco in the Pacific Gulf of the Farallones, up to the Canadian border then back down to the city on the bay for the finish. This marathon will traverse the real America, from stock yards to deserted old towns, with nothing but tumble weed blowing through them. The deserted high ridge mountains of the ‘off track’ America will take competitors deep into some of most scenic parts of the USA, such as Redwood, but also at times following in the footsteps of the early pioneers. A great combination of touring and competition, it would be criminal not to take advantage of the many remote gravel roads for regularities, whilst some tests will be on America’s most famous race tracks!

The Middle East beckons at the end of the year in the Gulf where the mystique of ancient Arabia and treks through the different states, built tribal communities that now flourish. The desert is not far from any city but without knowledge, the unwary can soon lose their way and be forced to navigate by the stars.

The inhabitants of the Middle Eastern states are sports mad. From falconry, camel racing, to football and off road adventure, they love their cars. Historic rally cars will be welcomed and much admired on this Badawi Trail currently being developed by Middle East rallying experts.

Work continues on the ground breaking Asahi Japanese event for 2024, where officials and enthusiasts alike are making progress in the organisation of a classic ‘must do’ event in the land of the rising sun.

With India and Africa on the horizon for 2025, HERO-ERA are laying the foundations of a captivating long term calendar to cater for the far reaching tastes of many motoring adventurists. They are the teams looking for fresh challenges as much as their established favourite classic events which are all in the latest calendar released today.

“After the last 18 months of uncertainty I hope we can now move forward with renewed enthusiasm for an exciting new calendar for 2022 and beyond. The range of events are designed to cater for all skill levels from the first timers with events such as The Novice Trial and Summer Trial in the U.K., to the more relaxed long distance events with time to enjoy the locations such as, London Lisboa, Temple Rally and Trans America in the next two years.

“We are retaining the more challenging events such as the Sahara, the new Trans Mongolian Motor Challenge and the ultimate Motor Challenge of Peking to Paris, together with our one day challenges.  From one day Hero Challenges to the PAAI  and multi day RAC Rally of the Tests and Le Jog, there is also a choice of the length of events to suit different competitor’s schedules.

“I look forward to catching up with entrants old and new as myself and the team strive to deliver the full range of events to cater for all. 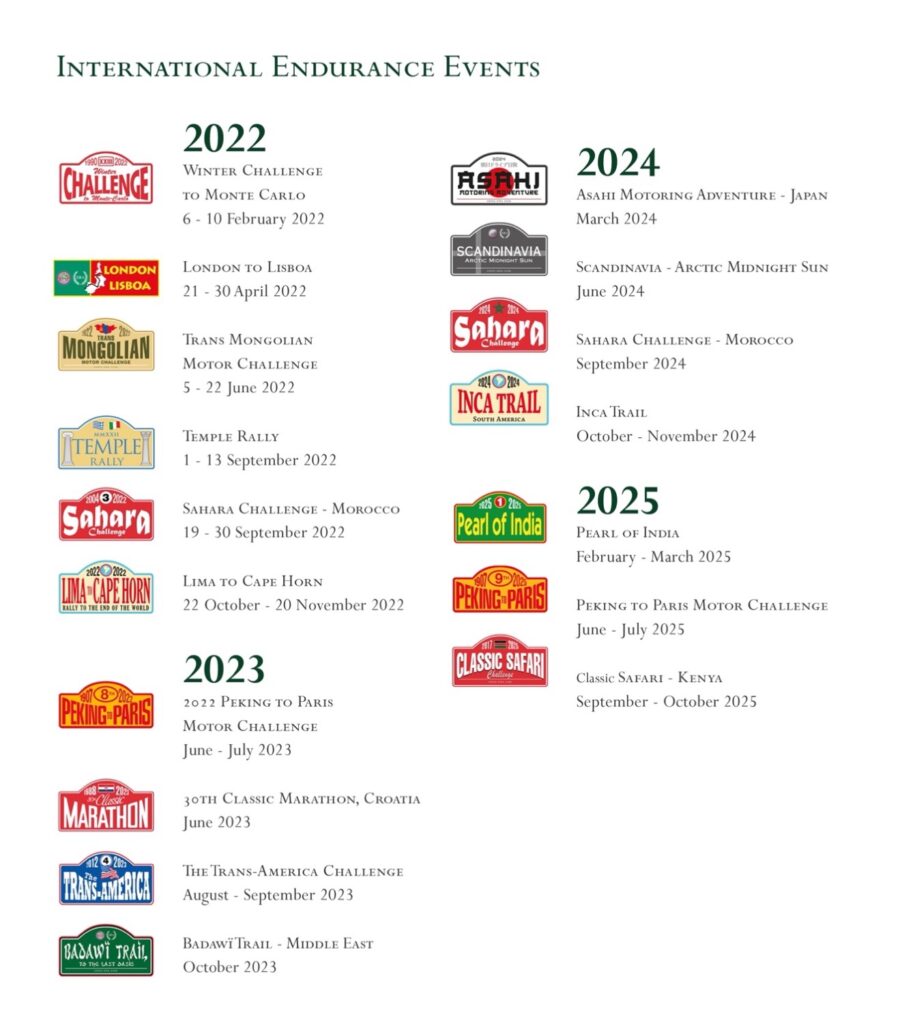