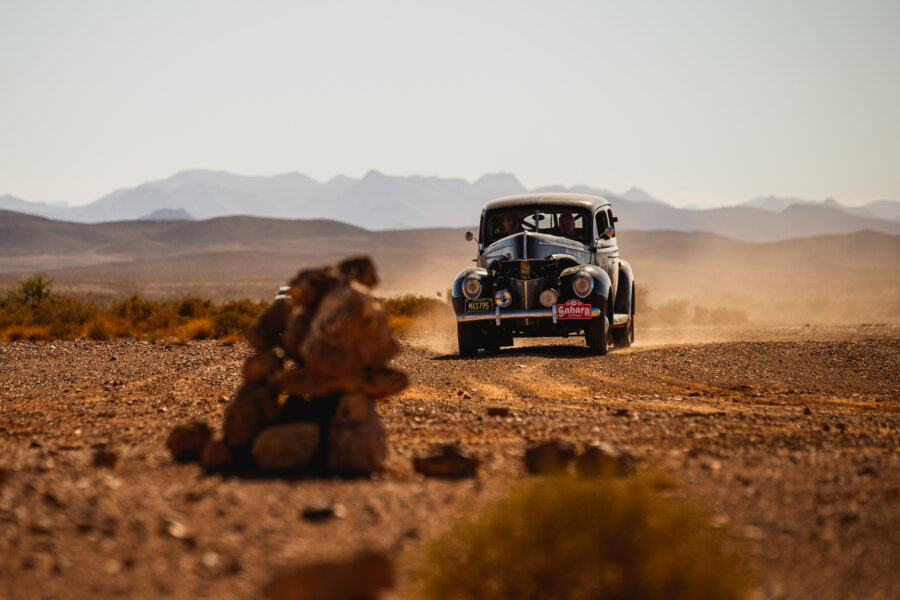 On September the 19th, at 10 am, the HERO-ERA Sahara Challenge thundered into life for a 4500 kilometre, 12-day navigation of Morocco, including plenty of desert driving. The start, and indeed the end location, was Malaga in Spain, just a short hop from the African coast and an easier place to assemble the multiple nationalities entered into this incredible event. 41 machines were scheduled to take the start and HERO-ERA Chairman Tomas de Vargas-Machuca led the field away as the zero car, in his fabulous 1914 American LaFrance Type 10.

That was four days and 1246km ago, and as it stands the top of the table is occupied by car 20, Pierre Gerber + Alice Leuenberger in their 1946 Ford Coupe, and in the classic category (only the vintage and vintagent cars are eligible for an overall win on this rally) the overall leader is car 39, Franc Hofermann-Kiefer + Fritz Hofermann-Kiefer in a bright yellow Datsun 240. This has not always been the case though, and over the past four days competition there has been a new overall leader every single day.

It is no wonder, as the route is designed to test the crews and the machines and the long days in the saddle will extract mistakes from even the most experienced. Straight out of the traps it was actually a combination of experience and inexperience that was working well, as Bill Cleyndert took an early lead on day one, navigated by his daughter Georgia who despite this being her first rally had guided them to a first day tally of just 3 seconds of penalty, despite a wrong turn early on, thankfully on a non-competition section. Topping the category for classic machines were Nigel and Sally Woof, who despite a fuelling problem had managed to ascend the Andalusian mountains with jut two seconds of penalty, a brilliant day for the pair that have come on leaps and bounds in the last few years, although Nigel could only think about his mechanical issues in the queue for that evening’s ferry to Tangiers.

After a late finish on the first night, thanks to a cancelled ferry, the first day in Morocco began in earnest at 08:30 on the Tuesday morning, just enough time for a few hours sleep. This began from M’Diq, on the coast of the Mediterranean, and after safe navigation of the police checkpoints that are common place in Morocco the roads took on an altogether more elevated pattern as the competition headed south towards Fez, via the Rif Mountains. The day would see more mechanical problems for some, and begin without car 45, John Gearing + James Gearing who’s Porsche 911 had suffered electrical issues and car 1, Scott Perekslis + Allan Kersgard in the ‘Iron Horse’ Chrysler B-70 Roadster that was stuck in port awaiting Scott’s arrival after misplacing his passport. At the close of play a new leader occupied the top spot, the number 8 car of Brian Scowcroft + son Andrew Scowcroft, who had wrestled the 1936 Chevrolet Fangio Coupe over the Rif to a total penalty of 13 seconds, 12 seconds ahead of the second placed car, the no 20 1946 Ford Coupe of Pierre Gerber + Alice Leuenberger. The Classic category had changed as well, with the Woofs conceding first to the Safari spec 911 of Lars and Annette Rolner, who had amassed just 2 seconds of penalty on the day.

Day three would begin fighting in the traffic of the Fez rush hour, under overcast skies, but would end in the hot hot sun of the desert, although the dark clouds would follow some crews all day. Car 1 was now back with the rally, although the first Time Control competition section of the event, a fabulous climb into the Tazekka National Park would certainly test the old American iron, as it would many of the cars, although many performed admirably and the penalties were spread amongst the field, as opposed to just being confined to the vintage runners. The first mechanical casualty of the day would be a big one, the 911 of Lars and Annette Rolner, leading the classic category and arguably one of the favourites, but during the second regularity of the day disaster struck with a fuel pump issue, that would see them drop to the lower reaches of the field. Car 31, Lars-Olof Staffens and navigator Heikki Saloheimo would be joining them on the way to the final time control as well, with a broken exhaust and car 10 of Neil Lawson-May and Paul Rivlin would have a day plagued with brake problems.

The first proper desert section ended the days competition, and the service that evening was a hive of activity as crews set about tending to their cars after a monster 464 km day. Sadly there would be another retirement, Brian Scowcroft had become ill and after consultation with the trips medical team retirement was deemed the only option. Up at the head of the field the lead now belonged to car 6, Carlos Rieder + Urs Schnüeriger in the 1931 Ford Model A Coupe, who had leapt from third to first after accruing just three seconds of penalty during the day. After the demise of the Porsche the Woofs had reclaimed top spot in the Classic category, with the 39 Datsun 240z crewed by Franc Hofermann-Kiefer + Fritz Hofermann-Kiefer just five seconds behind.

Day four was another big mileage day, this time 467 km to Erfoud over the mighty Atlas Mountains, that separate the Sahara from the Mediterranean coast. A two and a half hour concentration run began the day, before another ascending time control challenge up into, and then down from, the Atlas. Along the way the 38 machine of Colin Paton + Fiona Paton, a Volvo 122S, would retire with engine oil pressure failure. Car 3, Andy Buchan + Roy Buchan in the Bentley Le Mans, would also suffer their own problems, with fuelling issues causing them to limp into lunch. The most spectacular mechanical problem of the day though would go to Peter Moore + Dan Stellmacher in the number 27 Austin Healey Sprite. The smallest car on the event had done a marvellous job of taking on the arduous route, but a half shaft failure had caused the entire axle and wheel assembly to free itself from the car as they travelled through the Todra Gorge, luckily with no serious implications. They were ably assisted by the mechanical assistance team, and car zero, who are equipped with welding apparatus and the machine was fixed in the bottom of the gorge before they completed the days route.

There was more desert navigation to finish, a much longer section this time and fully off piste with the route guided by GPS waypoints. The various tracks in the desert caught out a number of crews, and by the time the results for the day were gathered it was now car 20, Pierre Gerber + Alice Leuenberger in the 1946b Ford Coupe in the lead, from 7. Alex Vassbotten + Sebastian Gross – Alvis Firefly 12/70, in second and 6. Carlos Rieder + Urs Schnüeriger – Ford Model A Coupe in third, but with the resurgent Cleynderts just off the podium in fourth. The Classic field was now topped by the hard charging 39 Datsun of Franc Hofermann-Kiefer + Fritz Hofermann-Kiefer, with 28. Bjorn Schage + Trond Brathen – Morgan Plus 4 in second and the Woofs in third.

Day five is a desert loop, navigated purely on the GPS waypoints, and will surely see the lead change hands again. We are still only a third of the way into this adventure, and already there have been plenty of unexpected events and a constantly moving leader board, who knows what the next few days might bring. 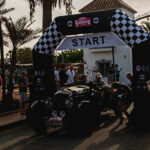 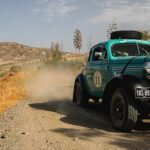 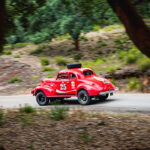 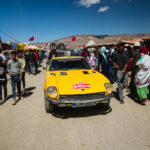 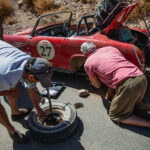 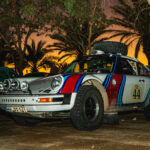 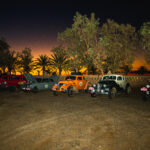 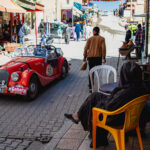 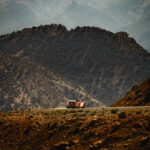