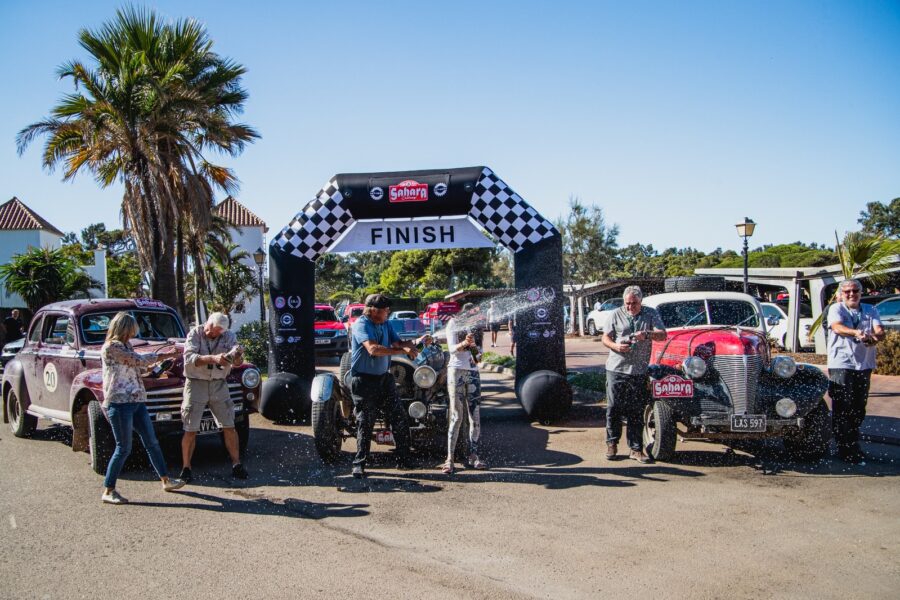 Competition Goes Down to Final Day

The dust has settled, and the champagne has been sprayed, after 4500 difficult kilometres the 2022 Sahara Challenge has reached it’s end and Bentley driver Bill Cleyndert is victorious again, repeating his 2015 triumph, but this time with daughter Georgia in the navigator’s seat, on her first ever rally. Following the Cleyndert’s home were Pierre Gerber + Alice Leuenberger, in their 1946 Ford Coupe with third place being awarded to Jorge Perez Companc + Jose Volta in a 1938 Chevrolet Coupe, the very first rally for the car.

The rally itself followed a loop around Morocco, travelling east to Fez, south to the dunes of Merzouga and then back around the coast via Marrakech and Rabat, before finally ending where it had begun in Malaga, Spain. There were nights under canvas and torrential rain, as well as the hot sun that baked the landscape hard and dry. The route was certainly a treacherous and rough one, with care needed to ensure reliability of machine and as well as the dust of the desert floor, there were the heights of the titanic Atlas Mountains to scale as well. A route that resembled a mini-Peking to Paris, on an event that pushed the skill of all of those involved.

The victory for the Cleyndert’s was no easy feat, and after a tough second day they had dropped to 8th overall after picking up over two minutes of penalties and were some way off of the pace. But there began a gritty fight back, aided by consistency in their times as well as the fact that the Bentley 3-4½ proved tremendously reliable on the at times rough terrain, when others in the rally were suffering machine failure and in the case of one-time leaders Brian and Andrew Scowcroft, another parent and offspring pairing, ill health forced early retirement.

Bill and Georgia finally took the lead on day eight of the rally, wrestling top spot away from Gerber and Leuenberger and despite pressure from the Ford Coupe never let the lead slip and eventually finished 44 seconds clear of their nearest challengers. Bill was adamant throughout that he and his daughter were just out to have a good time, although his admiration for the accomplishment of his first-time map reader was plain for all to see, as was the clear enjoyment of rallying with his daughter. Of his victory Bill said, “Georgia won the rally really, I’m so proud of her, she’s been brilliant. It’s been a great event, great company, great roads and just a brilliant rally”.

The smile on Georgias face at the finish was as broad as the Sahara itself, and she remarked that “it’s quite surreal, and I don’t really know what to do with myself now. For two weeks I’ve followed tulips and a clock, and now it has finished I don’t know what to do next!” Next in terms of rallying could be The Flying Scotsman, an event that Georgia has her sights set on and we might perhaps be seeing the emergence of a new talent in the sport.

Second placed Pierre Gerber + Alice Leuenberger had put up a tremendous fight and held the lead for most of the rally, the Ford had looked a good pick for the desert and mountains and between the pair had always looked assured and in control. Whilst losing after leading is always tough to take both were in a positive frame of mind at the finish and Pierre stated “It has been a big experience, and we performed much better than expected as it is the first time for this car. We have learnt a lot, congratulations to Bill and Georgia, they deserve it and we are just happy to be back safe.”

Jorge Perez Companc + Jose Volta, who occupied third place on the podium in their Chevrolet Coupe may well be familiar to anyone who follows WRC or Dakar, as that is their usual realm of competition. Jorge though is looking for a change of pace as he matures, although no doubt the Dakar experiences paid dividends in the desert as they finished nearly three minutes ahead of fourth place. “Jose kept having to tell me to slow down, as the Chevy is not a WRC car” joked Jorge, “we could not believe it when we saw that we were in third, this is the car’s first rally, and it has been brilliant.”

Classic Category Separated by A Hair’s Breadth at Finish

Whilst this rally can only be won by cars of a pre-war persuasion, the competition for the overall win in the classic category was just as hot, with the lead changing hands constantly throughout the event. In fact, at one time it seemed as if nobody wanted to hold onto top spot. Eventually though it settled down into a two-horse race between Nigel Woof + Sally Woof in their 1961 Volvo PV544 and father and son team Franc Hofermann-Kiefer + Fritz Hofermann-Kiefer in their gorgeous bright yellow Datsun 240 Z and the battle would go right down to the wire.

For the Woof’s it was a case of what might have been, after an uncharacteristic mistake with the clocks on day 9 and then further navigational problems on day 10 had allowed the Datsun pair to claw back a debt of over a minute to the blue Volvo, and even a wonderfully solid performance from Nigel and Sally on the final day couldn’t make back the deficit. They finished just 4 seconds behind, an incredibly slim margin after such a vast distance. The class win belonged to Franc and Fritz though and was thoroughly deserved after some great performances on the road and diligent maintenance off of it at the end of each day. Franc commented that “my best moment was jumping in the dunes, just brilliant. We’ve not much experience of rallying but have been so impressed by incredible detail from the organisers, it has just been a wonderful experience” and Fritz added “The last few miles were stressful as we were running out of fuel. Luckily another competitor had some spare and we got here, but it was close.”

The rally has certainly been a tough one, well it ought to be, being a warmup event for the mighty Peking to Paris and many on this rally are using it as an opportunity to test man and machine for that intense challenge. One such pairing preparing for that challenge were Tomas de Vargas Machuca + Josh Thompson, shaking down Tomas’ mammoth American LaFrance Type 10. The 1914 machine is colossal, dwarfing everything else in the rally and no doubt giving the residents of Morocco something to talk about for an age. The rally for Machuca and Thompson was certainly an arduous one, with the constant maintenance needed to keep the car rolling leading to many a late night which coupled with the steady pace needed to negotiate the rough roads meant long days in and out of the saddle. After making it to the finish HERO-ERA Chairman Tomas had this to say “it’s the hardest thing I’ve ever done in a car, such long days. I don’t know what to do with myself tomorrow, I’ll probably be up at 5:30 to work on the car as I have been every other day! It’s been a great event, amazing roads. The people have been amazing as well and the cheering kept us going on our longest days.”

Unforgettable Event from Deputy Clerk of the Course John Spiller

The route was the joint mastermind of the Deputy Clerk of the Course John Spiller and Route Planner Anthony Preston. John is a man who has certainly experienced more than his fair share of endurance rallies, so it is only right that the final word should go to him. Reflecting on a successful and well received event, Spiller concluded that “The event went very well, with no major problems, despite one desert camp being washed away by the rain. I hope the competitors enjoyed it as well and I’m really happy for everyone here at the finish.”

Clerk of the Course and HERO-ERA Competition Director, Guy Woodcock, echoed John Spiller’s sentiments after he and his team worked so hard to ensure its success.

After the awards ceremony all had to return to normality, after an event that was anything but. A special bond develops between competitors after an even such as this, and the stories of triumph and despair in the sands of the Sahara will no doubt be told for many a year. For now though, to the victors the spoils, but to all that have competed there goes respect. 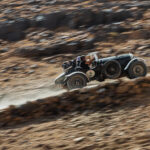 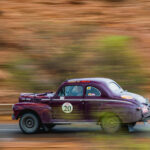 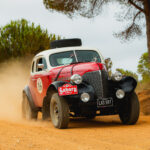 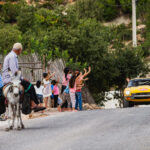 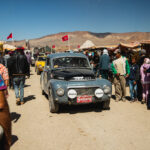 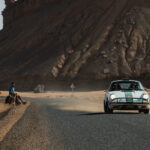