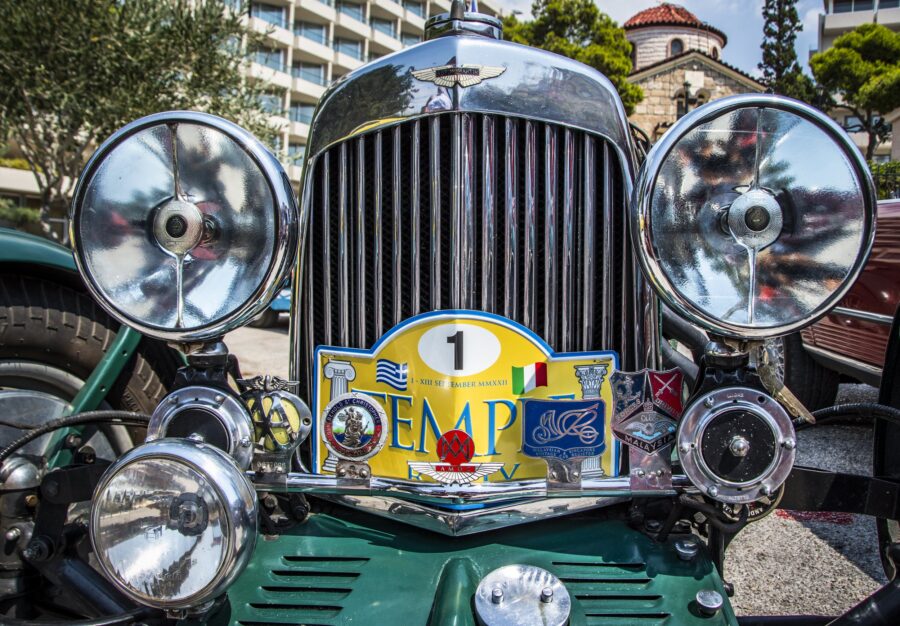 They have come from Australia, the United States, Sweden, Germany, Poland, Belgium, the United Kingdom with cars of many colours, shapes and sizes.

Today the United Nations embark from Athens on the Temple Rally, a new, dazzling jewel in the HERO-ERA portfolio of long distance rallies.

Like the cars, the crews are also a wide range of ages, backgrounds, drawn to Greece by the lure of what is one of the most exotic events in the calendar, a 4000 kilometre drive from the oldest city in Europe to Rome, a youngster compared to the seat of democracy.

The first HERO – ERA endurance event since the pandemic, it has been keeping competitors waiting with excitement for a two week driving adventure taking the 24 cars through some of the most spectacular landscapes on the planet.

Some cars have already taken part in this trilogy of events which includes The Adriatic Adventure, in which 15 of the crews have competed, and the Baltic Classic. Now they are all set for a chance to travel roads which have seen armies, merchants and philosophers trek for thousands of years.

Aristotle declared that all human actions have one or more of these seven causes: chance, nature, compulsions, habit, reason, passion and desire. All of these qualities will be on view in the coming days en route to the Eternal City.

For one crew in particular, the thought of 2500 miles of rallying is not too daunting.

Nigel Dowding and Mary Antcliff, who live within cycling distance of Silverstone, set off in their beautiful 1934 Aston Martin for Athens on August 3.

They have already covered 3000 miles in the open top car through France, Germany, Austria, Italy, Slovenia, Croatia, Bosnia, North Macedonia and Montenegro before reaching Athens for the start of the Temple Rally. Veterans of rallies such as the Inca Trial, and the Flying Scotsman and other long distance events with HERO-ERA, Nigel and Mary took up regularities and tests as something to do together.

The same goes for Australian couple Steve and Ruth Lambert who have travelled from Canberra to take on the romantic challenge of the Temple.

Matilda, appropriately, is a Karmann Ghia from 1967, a stylish lady.

“She’s been living in England but we are moving her to a new home in Australia after this,” said Steve.

“I’m really looking forward to getting out on these roads, they look great.  It’s a pleasure in this car.”

It did not take long today for fans to get camera phones out when the cars emerged into the 30C heat for scrutineering among the dazzling white seaside luxury hotels not far from Athens city centre.

It was a chance for the crews to get to know each other as they waited for the HERO-ERA officials and mechanics to check over the cars in the final preparations. Many knew each other from other events, some were making new friendships ahead of the departure from the world’s only marble stadium, the Panatheniac.

That was home to the world’s first modern Olympic Games in 1896 and it is a rare honour for the HERO-ERA event to be allowed to start here.

The range of cars is a delight.  The little Aston Martin is the oldest, a BMW 316 and a Porsche the youngest from 1975.

Three muscular Mustangs are in the field, there is a Volvo Amazon 122 from 1965 which has rallied all over the world.

A Bentley Speed 8 from 1949 brought things to a halt at an Athens petrol station when it pulled in.

Over the next 13 days the lunch and dinner stops will be full social affairs. Almost everyone denies being too competitive but there is no doubt that being first in Rome is on many minds.

To do so, they will drive on roads less travelled to take in wondrous views, magnificent creations of nature and man with coastal and hill travels through Greece.

Crews will be driving on roads used by the WRC on the Acropolis Rally with two regularities to get the concentration levels up. After day 5 there is an overnight ferry crossing to Italy, on day 8 another ferry to Sicily.

Three days on the island’s testing roads, the challenge of the Targa Florio around the twisting road in the mountains around Palermo where the historic race was held, then another ferry to the mainland and off to Rome.

The first leg will be a run between two “capitals.”

At the end of the 300 kilometres opener the crews arrive in Nafplio which, after the Greek War of Independence became the capital of the new state in 1821 – but by 1834, Athens had re-asserted itself.

They will have begun a test which will offer views of beautiful coastline through Loutraki on the Peloponnese but will also demand concentration on the task.

Two novice crews, who are new to long-distance rallies are excited but understandably nervous about the demands ahead of the regularities and tests.

Hans Lycketrop and his Swedish countryman, Karl Bergquist, have entered a 1975 Porsche 911.

“We wanted to try something different and saw this and entered,” says Karl who has been busy up until the last minute.

He flew in from his job with the European Space Agency where he negotiates with China over possible cooperation on various projects. Now he admits that from outer space to the small space of the Porsche for two weeks of navigating will bring another big challenge to his life.

Martin Beck and his son Joe are also making their debut in a Porsche 911.

The duo, from Devon, have done a lot of sailing together so they are confident of having a teamwork spirit as they travel on a new sporting adventure.

“I’ve done a plenty of sailing but decided with my wife to move to dry land and bought this car which has done plenty of events,” said Martin.

“We are here for the experience and I’ve taken all the old decals off the car as they don’t reflect what I’ve done, so the Temple Rally is the first of the new life.”

It is undoubtedly one of the most scenic rallies but the demands will provide good training for those with an eye on such a mighty challenge as the Peking to Paris which eight crews are planning to take on next year. 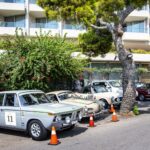 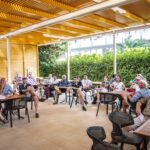 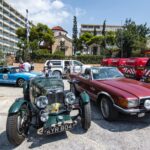 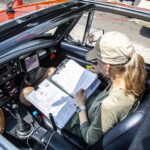 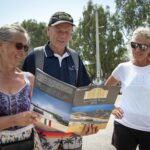