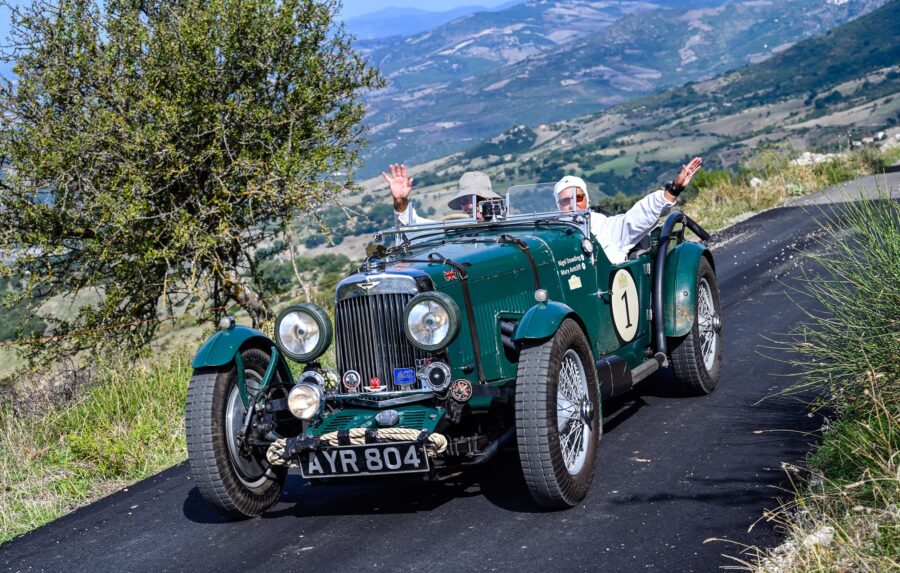 A new record was set for the Temple Rally as the crews made their way from sea level in the very south of Italy to just over 5000 feet at the start of a day which again mixed stunning scenery with skill and stamina.

It was a 320 mile journey that had everything from autostradas to narrow mountain roads with cows complete with dangling bells, tractors, a thousand hairpins and views so breath-taking that one competitor described it as driving in the sky.

There was also a change in the overall lead as Benno Britischgi and daughter Nina in their 1968 Mustang Convertible surrendered top spot after two consecutive days to Poland’s Tomasz Dzitko and partner Beata in a 1973 MGB GT.

The 2500 mile HERO-ERA rally from Athens to Rome has hooked the competitors with its blend of geographic discovery and driving challenges. From Matera, where the James Bond film Tomorrow Never Dies, the cars travelled a short distance to the circuit where the stunt drivers rehearsed their parts.

That saw British father and son crew Martin and Joe Beck set the fastest time of 2 minutes 12 seconds along the Britschgi car while the man who is often top of the circuit test, Dzitko, missed out by three seconds and was pushed back also by another British pairing of Peter and Louise Morton.

They have quietly and steadfastly maintained a high standard, being third for most of the rally with a mix of performances in their 1972 BMW 2002 which have some wondering if their softly, softly approach might yet see them top the podium in Rome.

“I love that we have done the heel to toe on the foot of Italy,”said Louise, artfully swerving the initial question of why they are consistently so good.

“The day actually started terribly because my rally clock was 11 seconds out and that cost us.  That was my fault and I hate that. We are steady.”

Very steady, and just 68 seconds behind the Britschgis with plenty of roads on which to close or overhaul that gap. It won’t be easy for the Swiss crew are formidable and while able to joke about their slip to second, they are determined to regain overall lead.

“It wasn’t my best day,” said Nina after they parked for the night at Villa San Giovanni.  “I din’t sleep very well, didn’t feel great and it was not a great morning. On Regularity 2 I missed the sign where you have to change to a different speed. He hadn’t seen it either and with hindsight I should have got him to back up and check but we carried on but when we were overtaking locals I knew we had gone wrong.

“It cost us a lot.  What did it feel like?  Panic.  It’s a case of ‘you had one job’ ……I was very upset when we stopped for lunch because I knew it had knocked us down but we then had a good afternoon. I thought we might be two minutes behind Tomasz but it 1 minute and 9 seconds is not as bad as I feared.”  Benno laughs and says: ”To hell with it, We will be back”

The route was closed briefly on Regularity 1 when a farmer moved his herd of cows out of a field and down the road, their bells clanking away while cars waited. As the cars made their way along the ridge line in the forests, showing another side to southern Italy few knew,  the roads were punctuated with warning signs that snow chains may be required in a couple of months.

Back down to the coast for a stop and then soaring again into the National Park through some picturesque villages.  It is a struggle for some of the older, heavier saloons as they encounter hairpin hell. “At one point our car which is heavy and has ourselves and our luggage, was doing only 12 kph going jump out of the hairpin,”said Tisa Pusnik, rallying a 1973 Saab with Ivan Pusnik.  “But you have fantastic views so we have time to look.”

Nigel Dowding was busy checking out the 1934 Aston Martin at lunch to investigate a tapping noise he did not like but found that it was a loose speedo drive cable which he quickly rectified. Monaco’s Steve Gale found his 1970 MGB GT over heating on hills and American Karl Eisleben had to get two litres of fuel from the HERO-ERA mechanics to reach the hotel after doing the final circuit test “on fumes.” In his big-engined Shelby GT 350H.

By the time they gathered at the end there were many stories of wrong turns in regularities or on the open roads, forms with wrong times, car troubles, not-so-funny noises. But Yves Faymonville and Kerstin Schmitt from Belgium, who are rallying in one of the events big draws for crowds, an open-top Bentley Speed 8, beautiful but long and unwieldy in the tight corners, were rewarded for their skill with a perfect zero score at Regularity 3.

An award for persistence must go to Hans Lycketorp and Karl Bergquist who have had so many problems for the novice pair in their Porsche 911.   The latest came when the car declined to power up at morning departure until given a push start.  The same happened when they stopped for the mid-morning break but the HERO-ERA mechanics sorted out the ignition starter at lunch.  “We are the cat with nine lives,” joked Hans.

Tomorrow is another ferry crossing as the Temple Rally moves to Sicily for the latest exciting chapter of the adventure. 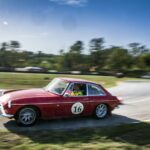 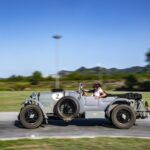 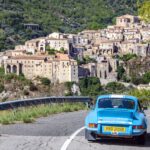 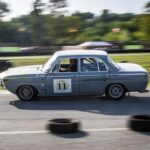 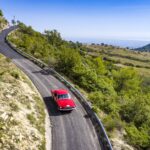 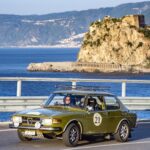 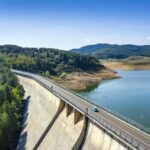 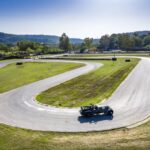