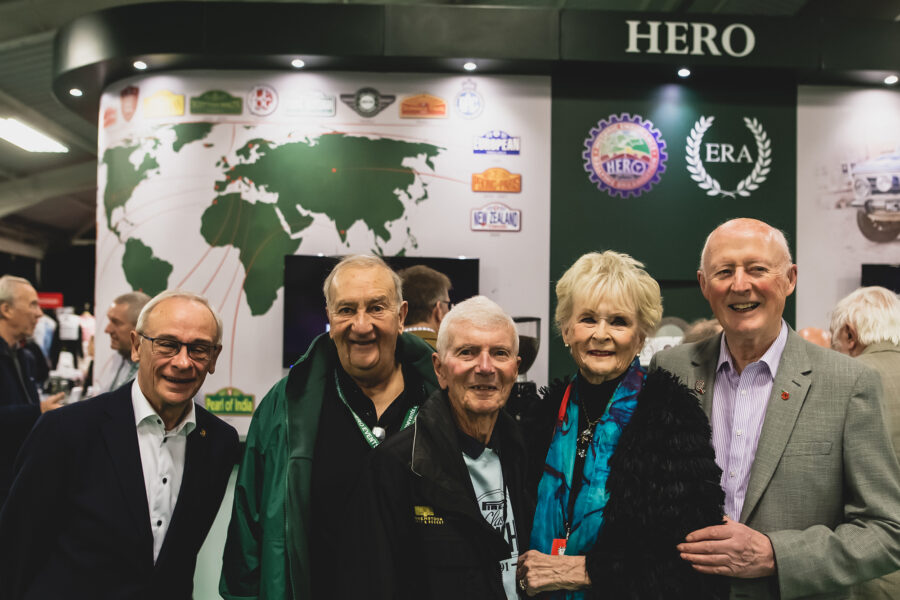 *From RAF pilot to BBC employee and passionate skier, Willy was a true wonder

There are many famous rally navigators, but not many could match Willy Cave’s colourful career or match his record of still competing and consulting on the art of navigation in their 90’s. He was synonymous with rally success over 70 active years in the sport, simply a rally legend. Willy was known for his wondrous navigational skills, his organisational brilliance and enthusiasm, qualities he took to all his teams whether works or private, he was genial yet competitive by nature.

His great friend and driver Peter Barker competed in over 25 events with the legend including twice winning the Alpine Cup Historique in 2003 and 2010 as well as numerous class wins on the Rallye Monte Carlo Historique and other events, Peter said; “He was an amazing person, his organisation was superb but his sense of time and space was unique. You felt with Willy he could get you to the right place, on time, without a map using just his instinctive knowledge of the terrain. Having learned in the RAF to navigate by the stars, if all else failed you could stop the car and he would see some celestial body which would get you to the right place! He had an uncanny ability to find the right way across the earth’s surface.

“I competed with him in 25 events, many of them internationals. I spent over a hundred days and many nights with him mostly in Mini Coopers, so I got to know him pretty well, enough to say he was a wonderful man, a real talent, an international sportsman of the highest calibre.

“There are many good OS map readers, but Willy had an extra sense which he once described as his own love of time and space.”

Willy joined the RAF just after the war as he was too young to fight. He did his national service and flew Spitfires, Meteor and Vampire jets. He was on the reserve list ready to be called up to the Korean War, but he never got the call. He never fought in combat but he was a combat pilot who loved flying. He enjoyed all his RAF experiences, learning a huge amount, but the biggest result for the waiting world of rallying was that his service in the forces gave him his love of navigation.

He competed in many HERO-ERA events, he particularly loved the Winter Challenge to Monte Carlo, he competed in them every year at one point. His very first historic rally was the Pirelli Classic Marathon in 1991 where he competed with John Sprinzel in his famous Austin Healey Sprite registration PMO 200. Willy enjoyed himself so much that he got the bug all over again and started his second rally career, this time in classic rallying, carrying on until 2020! 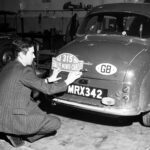 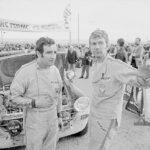 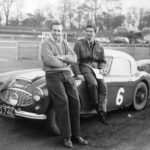 He enjoyed many career highlights but one of the results he was very proud of was winning an Alpine Cup with Paddy Hopkirk in 1956 in a Triumph TR3. The Coupes des Alpes in it’s original format was a tortuous and dangerous rally, up and down the Alps in all conditions, with many stages through the night. The classic Stelvio Pass was always a big challenge, not just to beat the bogie time, but to try to keep a clean sheet, a time card free of penalties. To stay on time you had to motor ‘flat out.’

Grand Prix drivers Willy Mairesse and Robert Manzon didn’t get through after crashes and technical problems. Raymond Baxter had had accident in his Sunbeam Rapier as did Jack Sears in the works MGA on the final night.

That Alpine Cup was hard earned through Hopkirk’s tenacity behind the wheel but crucially Willy’s great navigation with his special sense of time and space.

That was the first of three Alpine Cup wins for Willy, he also won two together with Peter Barker, both events driven in Peter’s Mini Cooper S. Willy loved the Alpine Rally, he loved the adventure of the Alps, and when he wasn’t scaling them in a rally car he was shooting down them on skis as he was a very keen and accomplished skier.

He also won his class with Brian Culcheth in a 1300 cc Morris Marina Coupe on the 1971 RAC Rally, his last works outing. He was very proud of that, it was a great result in an unfancied car which was sponsored by Wheelbase, the forerunner of Top Gear as he worked for the BBC at the time. He was involved in the production of many BBC programmes, from sports to politics, winning awards along the way as part of the team but that RAC Rally award was special for him.

He and Brian Culcheth won the class against all the odds, even beating Russell Brooks in a 1300 cc Mini Cooper S. It was a testament to Willy’s incredible navigational skills and Brian Culcheth’s great driving in a car that really wasn’t that competitive.

He also took part in the 1970 World Cup Rally with Peter Jopp and Mark Khan of the Daily Mirror in an Austin 1800 Landcrab, sadly they failed to finish after an engine oil feed issue.

Willy Cave’s skills were much sought after by the works teams and top drivers alike. Willy navigated for Brian Culcheth, Jack Sears, Paddy Hopkirk and John Sprinzel to name a few but the list of works teams who employed him is lengthy and included, Standard, Standard Triumph, British Leyland, Rover and BMC. He even drove for the Rootes Group in a Humber Super Snipe!

Then there is the incredible story of his taxi ride to Monte Carlo in 1961! As a TV stunt Willy Cave was entered as navigator in an Austin FX3 taxi with the racing driver Tony Brooks and the then BBC producer Eric Dimmock who was later to become BBC Head of Sport.

It didn’t go that well, deteriorating into just that, a TV publicity stunt, but at least the BBC got their story and Brooks gave many interviews along the way including to Monte Carlo TV whilst Willy kept his head down in the maps.

What it actually meant in technical terms is a result of the Cave organised initiative which survives to this day, the 1961 Austin FH3 taxi is still homologated! This Austin Cab is still eligible for the Rallye Monte Carlo Historique! Every now and then an intrepid person enters an Austin FH3 taxi and turns up on the event, much to the chagrin of the organisers, the Automobile Club of Monaco!

A Belgian classic fan as he then prepared to drive an Austin taxi from Scotland to Monaco in the Rallye Monte Carlo Historique to emulate Willy Cave’s TV voyage. 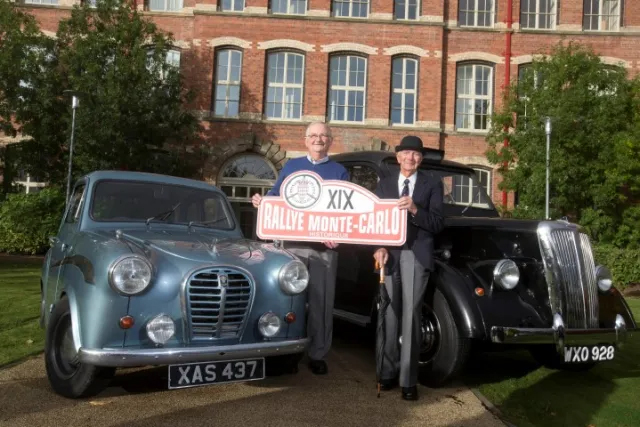 Jean-Marie Herman re-enacted the publicity stunt originally pulled off in 1961 by Tony Brooks and navigator Willy Cave by piloting an Austin FX3 from the start point at Paisley 1700 miles to the finish in the south of France.

The 64-year-old bought the cab in Germany for €4000. He said: ‘It was not too expensive to buy but the restoration cost quite a bit. As the car neared readiness Jean-Marie said; “The car is nearly ready – I just need to attach the rally-specific additions and the taxi meter!”

In the Grand Prix equivalent of the Hall of Fame for F1 drivers, only the rally elite who have made major contributions to their sport over many years, have been invited to join the Ecurie Cod Fillet, a club that continues to add sparkling names to its illustrious list of famous rally folk. Willy Cave was a very proud long standing member.

Started by Roy Fidler (who was a fish merchant, hence the title) and John Hopwood (glove manufacturer, nothing to do with fish!) who were a successful rally driver and navigator respectively, they made sure the list of star drivers, navigators and organisers invited to join from the pantheon of rallying included Willy Cave for his incredible contribution to the sport.

The HERO-ERA stand at Classic car shows, most notably at Race Retro, has always been a hive of activity acting as a hub for hospitality and events, the most famous of which was the Ecurie Cod Fillet pre-lunch meeting when the cream of former rally navigators and drivers gathered on the stand. Central to this group was always Willy Cave.

Organised by former champion rally navigator Mike Broad, in the past luminaries who have gathered under the HERO-ERA banner included Jimmy McRae, Paddy Hopkirk, Terry Harryman, Stuart Turner, Nicky Grist and Tony Mason. Illustrious names such as 1981 world champion pairing of Ari Vatanen and David Richards, have also joined the group in the past.

Whilst the rally world pays it’s respects to ‘Mr Navigator’ now, the next such gathering will pay homage to Willy and remember his exploits whilst praising his wondrous navigational skills. His name will be for ever enshrined on the time card of rally greats who lead drivers and teams to glory.

Willy is survived by his two daughters Rosy and Vicky to whom HERO-ERA offers it’s most sincere condolences. It also wishes to thank Peter Barker for his kind cooperation in the production of this appreciation of Willy Cave. 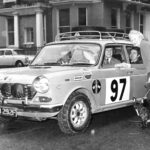 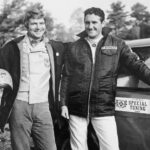