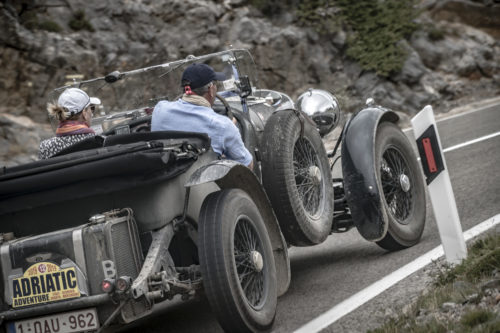 After a long but fascinating mixed day of competition with great sight seeing roads, weary rally crews were delighted to learn that tomorrow may bring some little twists to test the unwary on Sunday. As Clerk of the Course Mark Appleton promised earlier in the event, “we may have a few tricks up our sleeves” meaning that the contestants who are still battling with seconds between them for overall and class honours will doubly have to be on their metal for what could prove to be the sting in the Adriatic Adventure tail.

Lorna and Michael Harrison in their Volvo PV 544 who are lying in seventh place overall but 10 seconds behind Stephen and Julia Robertson’s Triumph TR3, believe they may have an advantage tomorrow and sneak back up the class order from fourth. Lorna; “It’s all going to come down to tomorrow when the regularities are going to be very tricky, so it will be interesting.” Michael; “we hope that will play into our hands, the last day has always had a sting in it!” Lorna added, “Mark is famous for them. But we hope we can cope with the speed changes better than others, we have only been three or four seconds behind the TR3 all day. In the chase we think we will struggle to get the Amazon but the other two are fair game.” Michael;” But anyone could get held up by a local and that could change things quickly.”

Also in the frame, as they have been for most of the rally are the father and son, Tim and Matt Wheatley who have been up and down from the overall podium so many times in their Volvo Amazon 122S as they have traded places with the mighty Chevrolet Camaro of Florence Fontaine and Morgan Hector. The Wheatleys are fourth again by just two seconds but it means they lead Classic Class 2. Tim; “Today has been long, we are quite tired now but it’s been good, the Volvo Amazon is going well. We keep it consistent on the link sections, we don’t get involved in all the overtaking like the Porsches, we don’t worry about it , we just keep it together on the regularities which weren’t too bad this afternoon.” Matt; “ we had a slight misfire on the test at the kart track but we didn’t lose much time. We could have lost a lot of time previously when we had a fuel leak. Luckily our fuel tank leak happened in Dubrovnik on the rest day! We have an aluminium tank which had split a weld so we got the tank out and the mechanics helped us seal it up. Its still leaking a bit.”

The test at the kart track was a chance for competitors to take some time off their rivals or just enjoy the drive. Heidi and Josef Dillier were doing just that having elected a few days ago just to soak up the sights and enjoy the great driving routes along the way instead of competing. But Josef couldn’t resist a crack at the kart track before the other cars arrived in his 1930 Chrysler 70 Roadster.” It was such fun, not the best car for such a small track but still enjoyable,” said Josef.

The event leaders Bruno and Carmo Rodrigues were reasonably happy with the hefty Volvo 164 on the little track, Bruno; “it went quite well despite the big tyres and now we have brakes, good brakes but not perfect brakes. We think we can stay in the lead today, but there are more controls and regularities to go before the finish so we will see” Bruno and Carmo did in fact manage to extend their lead back to 68 seconds over the Ford Escort of Simon Spinks and Jim Grayson.

Simon assessed his and Jim’s performance right after throwing the Escort around the kart track; “That went pretty well but we fear the gap may have opened again to the leaders as we had a bad morning. We made a class room error, we had written the speed table wrongly so ended up gaining 20 seconds, we are still learning!” They still have an overall podium position in second place.

There were so many smiles from crews as they came off the kart track having slid their rally cars around to crazy angles whether they were fighting for the class win or just out for a finish. Some were looking to achieve their highest ever position, others having another brilliant driving day.

Rita and Christian Dillier were just thrilled after their roller coaster ride around the track in their 1960 3.8 Jaguar Mk 2. Rita; “I’m just pale after all that, it was a good job I didn’t eat the fish at lunchtime!” Christian;” It was a boy’s dream to chase the Jag through those curves, it was outstanding!” Joanna Todd was enjoying the ride with her father John in the Mercedes 450 SLC until he hit the brakes hard at the stop astride line over the finish, giving her a pleasant jolt. “ Bl**dy hell” then major laughter from Joanna as John commented; “It’s the tyres.”

Rudi and Helga Friedrichs were impressive in the Alvis Speed 20 SA, Helga quickly took her hat off and hung on as she gave Rudi directions in the Vintage car that should not have been that quick around the little track; Rudi “It’s a proper car!”

Also in a proper car, a Porsche 911 were David and Susan Danglard. Clearly the car was well suited to the track but David was giving it his all, sliding wide at turn one kicking up the dirt as he quickly controlled the car flicking it back on track, Susan said as they pulled in after the test. “We slid a little at the first turn but all under control, it was great fun, he’s a great driver!”

Florence Fontaine and Morgan Hector ended the day back on the podium in the Chevrolet Camaro just two seconds ahead of the Wheatley’s Volvo, partly due to a good time on the kart track but mainly according to Morgan, “because we really focused on losing the minimum amount of time, that was the job today and again tomorrow.”

Fifth place Graham Platts and Neil Ripley have E-Type (XKE) driver, American David Ferguson to thank for getting them back into the rally and able to try and retain second in class on the final day. Neil;” On the last regularity before the test we could hear a knocking then a wobble, it was the left rear wheel trying to fall off,  we’d just managed a zero on nearly three wheels but got to the control where David stopped to help us, it was amazing. He is a mechanic and knew just what it was.”

Whilst tyres were being tortured on the kart track Albrecht and Christine Hasser were nursing theirs on their Jaguar Mk 1 even before they got there; Albrecht “ I have been checking the tyres a lot as they are a bit worn and making a strange noise. We have put the spare on the front but the issue was I chose tyres that were too soft for the job. We hope to have more tomorrow.”

Both morning regularities were conducted at altitude after views over the island of Pag at 930m after climbing out of Zadar. The forest tracks were sinuous yet smooth surfaced for the most part, but the forests were rich and tall. The hairpins in both regularities were severe yet there was a great flow to these wonderful driving roads. On the descent, crews had to watch for damp patches under the trees which could cause some brief loss of adhesion.

Also moving up to 10th overall to take their second day on the trot with the lowest penalty count were Bernd and Christiane Dannenmaier in their Porsche 911S. An excellent performance.

Most agreed it had been a great day. The competitors and those who are touring or picking their regularities, all are just loving driving the great routes. Delays have caused some to fall back but Roman Kainz’ story is worth telling, Roman; “This is my third co driver, I had to kick out my second one because he flipped our passports. He was supposed to go home from Dubrovnik I was in Bosnia, none of us had the chance to continue as each had the other’s passport. I called him but his phone didn’t work so we decided to go from Mostar, Bosnia to Dubrovnik with the different identity, a fake passport if you will, he was standing at airport and we swopped passports back. It was a 320 km trip, it cost 35000 penalty points in the rally but I’m happy not to be in a Bosnian jail. Actually as the passport slipped at the customs post I could see my former colleagues picture in the open passport!

My new co driver is Markus Vollstedt from Zurich, I’m only sorry the rally is nearly over otherwise I could have gone for my fourth co driver. Some change their cars and others their wives, but I change my co pilots.”