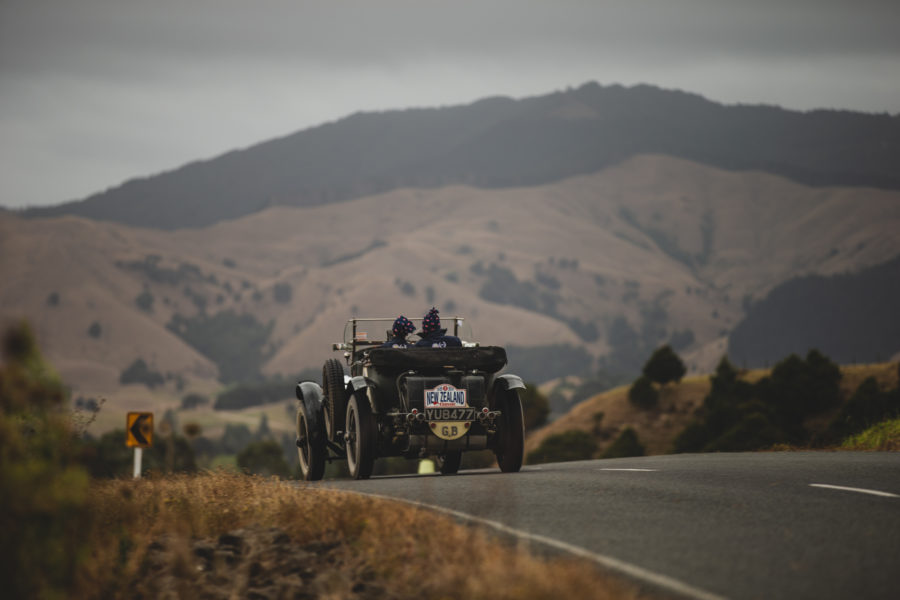 On a day that the competitors became as excited about a toilet as they did about the rally, the New Zealand Classic showed that this fascinating country has a wonderful variety of attractions, culture and heritage to offer. Whilst teams competed across three regularities, they encountered en route; coffee in an old bank where the safes could still be seen, a beach called 90 Mile Beach which is 55 miles long, a rain forest where it was raining and colonial town with real history.

Two exciting regularities on gravel dampened by rain, made them even slippier. Some tight and narrow tracks opened into fast and flowing corners with plenty of width, they were followed just as quickly by a series of hairpins. Even the deserted tarmac link roads which wound their way across the green hills and forests were a joy, crews loved letting their vehicles have their heads.

Many European competitors stopped in Kawakawa, a town made famous by the Austrian artist and architect Friedensreich Hundertwasser who deigned their almost baroque style unique public toilets. “He lived very close to us in Austria, he was such a great designer, so famous we had to stop and visit his toilet. It was an honour to take a leak in there, you must do the same” exclaimed Matthias Bitner who then took off with his brother Thomas in their Volvo 123 GT to get back into the rally.

A golf club lunch break with an array of vintage and classic cars parked overlooking 90 Mile Beach in real heat was an absolute treat overlooking blue sea and sky. Alas not so great for Steve and Samantha Hardwick as they had to park their Ford Falcon on the sloped scrub on the other side ready for to be pushed after starter motor failure. Tim Eades and Jim McLaren shunned the sea view, wisely parking their Ford Escort Mexico under a great sprawling tree for shade.

Not long after the lunch break, Canadians Leigh Pullen and Don Robart had to deal with a small fire in their 1967 Austin Healey Mk111 which set the car carpet alight but all was soon quelled.

Heading to Puketi rain forest for the third regularity of the day, crews passed another historic site at Waitangi where the Treaty of Waitangi was signed between the Maori and new colonials in 1840 which became the lynch pin of race relations in New Zealand.

The 16 kms of the Puketi rain forest regularity really was like threading cars through the jungle. Thick foliage, classic Kiwi ferns and creepers with humidity and creature noises for comfort. The only noise to suppress the forest creatures was the deep burr of a 1926 Bentley or the sharply tuned four cylinder Ford engine of the rally Escorts.

Breaking out of the forests and over the hills into the coastal resort of Okiato which was New Zealand’s first capital, crews then took a short ferry ride to Russell and the luxury of a colonial hotel in this very colonial town. Russell became the first permanent European settlement, home to convicts, whalers and drunken sailors, described by Charles Darwin as ‘the very refuse of society.!’

Martin Hunt, (GB) Bentley 4 ½ Litre Open Tourer; He and his wife Olivia have taken the lead in the vintage class at the end of day two. “It was good to see so much interest in the old cars by the locals at the start, but it’s a pity there aren’t more vintage cars on the event. Our car is the oldest and she is going well.” Olivia; “We wanted to come to New Zealand for quite a while, the previous event was cancelled so when the 2020 event was announced we entered quite quickly.”

Jim McLaren; (USA) navigator 1971 Ford Escort Mexico( 6th O/A 1st in class). “Absolutely perfect, the scenery, the timing is just perfect. There are so many rallies where you are speeding through everything, on Peking to Paris we never ever got time for lunch! This is a perfect mix of competition and enjoying the country. We are OK but we lost fifth gear, so long as we don’t lose anything else we will be fine, but this car just loves the bends and the dirt!”

Peter Gordon; (GB) 1935 Talbot (21st O/A 4th in class). “Today was absolutely fantastic, even driving through the cloud, rain and driving through the grit. For a 90 year old car it is amazing, it’s only a 2.3 litre but we feel really comfortable, it has been really enjoyable. The variety, the forest laid out in front of you in virtual fashion, we were following a Volvo through the scenery and the whole picture looked like it was just straight out of the brochure.”

Charlotte Van Houtte; (GB) 1965 Porsche 911 (12 O/A 4th in class). “On the first regularity we were one second off. I like to stay about two seconds ahead if I can, then in the second one I kept saying to Bertie, we are behind, we’re behind, you’ve got to go faster. Then there were all the twists and hairpins, a whole nine seconds out, that’s a lot!”

Claudine Bloom and Andy Twort; (GB) 1965 Volvo 122 (11th O/A 1st in class). Claudine, “Yes! I joined the Zero Club on the second regularity, I am well pleased, I think I need a medal!” Andy; “We are used to the loose surfaces it’s what we’re here for, you just have to keep it sensible and get it through. Everything is fine, she went right the way through Mongolia on Peking Paris and everything was fine then.”

Anthony Verloop (NLD) Sonja Verloop-Postmus (NLD); 1968 Mercedes-Benz 280 SE (13th O/A 3rd in class). Anthony, “Very good so far. We didn’t turn right early enough on the first regularity, my fault. Sonja made a mistake yesterday when she pushed both buttons on the stop watches to zero.” Sonja;” So now we are one all, but what a beautiful country, New Zealand has been on our list for a long time for many years and we love it.” Anthony; “Yes this Mercedes is the product of many years in endurance events around the world, all that experience has been built into this car. I have an MGB V8 but we chose this car for here, specially built last year for NZ, after so many long distance events I know what you need, this one is a really nice car to drive.” Sonja, “We feel really comfortable with it, it is a very solid car.”

Adrian Hodgson (GB) Mark Bramall (GB) Peugeot 504 Ti (4th O/A 1st in class). Adrian; “ No problems with the exhaust, it was built noisy! We’ve just had a good check around and all is good. Yes, we are enjoying the scenery but we are competitors, first and foremost we are out to compete so we are loving the NZ roads, real rally territory.” Mark; “There have been no big moments where I have to lift my head from the notes, I’ve just been keeping my head down and it’s going OK.” 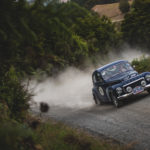 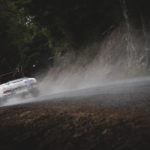 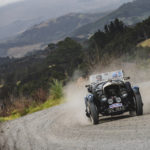 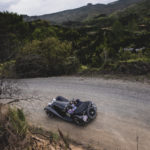 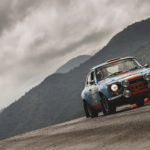 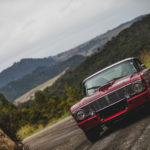