The rally crews left Queenstown very early this morning to cover the 437 kms to Te Anau, the route included a long tricky regularity over the Otama Valley which incorporated a Ridge road with numerous junctions.

Many were caught out including the second place crew of Sherif Hwaidak and Jack Harashchenko. After closing the gap to the leaders Ann Gillis and Filip Engelen’s Porsche 911 Targa on Sunday, today they lost over a minute in a dramatic missed turn by the number 33 Porsche. Jack “We missed a turn, I’m pretty upset with myself.” Sherif said; “It’s not Sunday yet!” Referring to the last day of the New Zealand Classic Rally. The crew were one minute late at TP18A and 0.02 early at the next. The Englenen and Gillis Porsche now leads by 1m 18sec.

Ann Gillis; “Jack came over to see me afterwards to tell me, I was so sorry, but he thinks their challenge is done but it’s not. I know ERA events and they usually get more tricky towards the end, as you can see from today. Anything can happen, including to us, this was the most difficult regularity to navigate so far on this event. I appreciated Jack coming over to tell us what had happened, it shows there can still be friendly rivalry.

“It was a very early start this morning in heavy rain so I was glad to get a coffee at the first halt before the regularity and take 15 minutes to get everything together. Now we are looking forward to the trip along Milford Haven, a 24 hour adventure holiday!”

Having enjoyed a day off to repair and refresh their vehicles and visit Queenstown by ferry, many of the teams really enjoyed the experience of the bustling town on the edge of Lake Wakatipu. Some took the chance to ride the Skyline Gondola 400m above Queenstown whilst others enjoyed relaxing in one of the many restaurants and cafes lining the edge of the lake to watch the boats bob around or listen to the screams of the passengers on the famous NZ jet boats.

The beautiful weather and tranquil experience of the lake was just a dream as the rally rose early to miserable rain and cold in the dark Kelvin Peninsula Resort. One by one the rally cars emerged from the safety of the underground car park to haul down the Milford Road, vintage headlight beams struggling to pierce the mist, old hoods with no sides making sure the ride was as miserable as the weather.

Stephen and Collette Owens, Jaguar SS 100,  Stephen; “It was a long drive, very uncomfortable in the rain, also bearing in mind that have to keep to speeds that Collette is comfortable with. We haven’t got any windscreen wipers, only the old manual knob that you have to twist each way to get a wipe.    Then it got stuck and we couldn’t move it all, it’s been eventful this morning! We are still not happy with the trip, even though we are trying to make our own adjustments it is still all over the place. It was telling us we were OK then we arrived 11 seconds early! The good thing is Collette hasn’t  shouted at me yet!”

Back on the Otama Valley Ridge Road, Bill and Olivia Holroyd were demonstrating how tricky the navigation was as they missed a turn then had to reverse to the triangular junction to take it the long way. Peter and Gris Gordon almost followed suit then grappled the MGB GT around the acute bend with just a small reverse.

Gris and Peter Gordon, MGB GT, 22nd O/A; Gris” We are focusing just on the fixed points and not bothering about the timing too much at the moment. We are often early as we are on a GPS navigation system, not one connected to the wheel, so it takes you the shortest route all the time, but that was still a bit difficult!

Her sister in law Sally Woof, navigator of her husband Nigel’s TR4 also experienced a few issues on the regularity.” I think we had a routing problem as well, we went round one of the triangles the wrong way.”

Following Griselda Gordon’s outstanding singing performance at dinner the other night when the group sang ‘Happy Birthday’ several times to HERO ERA Operations Director Brian Whyte, Sally revealed the experience behind the Gris voice. Sally;” We sing together sometimes but Gris was trained at the Glasgow School of Music. Last year she was at Ayr Theatre performing in Arthur Millers ‘All My Sons,’ she was absolutely brilliant. I saw Zoe Wanamaker playing that part, and even though she is my sister in law, I could watch Gris playing the part five times over compared to Zoe!”

Watching the regularity action unfold close to his farm was New Zealander Richard Cruickshank sitting astride his Quad bike with a lone sheep in a trailer behind. Richard “ I heard a bellowing noise from up on the hill and looked down to see two old Bentleys go past. I couldn’t believe my eyes. So rather than deliver the stray sheep back to my neighbour’s farm we went down to the side of the road to see the rest of the great cars go past, I loved. It. The rally cars come past here on the Silver Fern Rally, all the people round here love rallying!”

Crews are currently afloat on the Milford Sound, one of the West Coast of New Zealand’s biggest attractions. As teams cruise through the Fjords they will be experiencing one of the ‘most beautiful places on earth’. As they return with their stories of wonderment in 24 hours, it will be time to get straight back into the competition when it will become a bit tougher still. 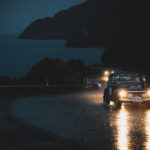 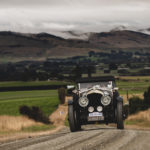 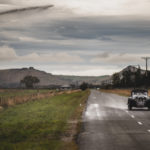 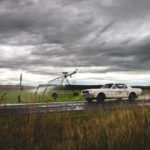 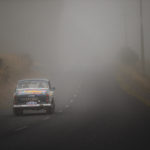 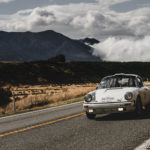