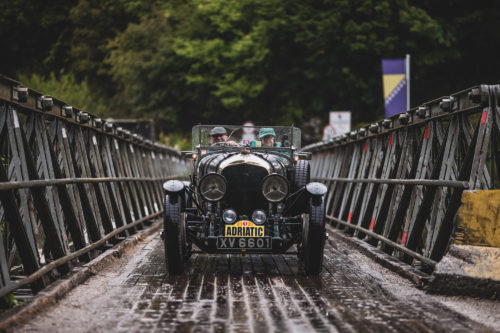 The longest day of the rally started with a run out of Sarajevo into the Bjelsnica Mountains, which hosted the Alpine events during the 1984 Winter Olympics, for the first regularity. Then the rally moved onto the neighbouring mountain for a second one. As the rain and mist increased, the roads became as slippy as the skating rinks of the 1984 games.

Even the ERA support vehicles were sliding, fighting for grip on the shiny tarmac mountain roads, with downhill hairpins a big challenge for the team trucks. As most survived the test of driving ability in the awful visibility, they then headed to the small mountain borders of Bosnia and Montenegro, after which a rickety bridge had to be gingerly crossed. 700 feet below was the raging torrents of the stunning Piv Canyon, now a very popular white water rafting location.

The trouble with the sleepy border was that it remained half asleep, the crossing process for the Adriatic Adventure took a long time as Clerk of the Course Mark Appleton explained: “The delay caused us a few problems this afternoon. Each car was taking at least three minutes to process but the build up just got worse. In that queue were some of our marshal teams which meant that we didn’t have any marshals ahead of the rally for the afternoon. With every cloud there is a silver lining, which meant we had a nice relaxed run from lunch along most of the route without any time pressures and everyone is now here in the sunshine of Montenegro looking out at the sea. Unfortunately they did miss a stunning drive through the Durmitor National Park, one of the greatest drives in Europe, but they did at least get the superb drive through the Piv Canyon and the great views over the Adriatic as they descended into Budva.

“Yes, the roads were treacherous this morning, especially over the second regularity, our support vehicles had lots of moments especially on the shiny downhill sections to hairpins. But hopefully that weather is behind us now. We are more costal based from now on, there will still be plenty of challenges ahead as we go up into the mountains and drop down again, plus a few surprises in store!”

Graham Platts and Neil Ripley found the wet roads more than treacherous in their Austin Healey, not the best wet weather car for handling. Graham; “We are a bit shaken actually, it was so slick we were on the edge at times.” Neil added; “ It was slippery and very scary!”

But through all of this foul weather the Bentley Mk V1 Special of Stephane Huynen and Marleen van Praag managed to snatch the lead of the Vintage Class back after their manifold was smashed by a rock yesterday. Marleen said as she and Stephane drew breath looking at the results freshly posted in Montenegro Rally HQ last night; “This is so close but I had a problem with my trip, but even so we have just got the lead back.”

Manuel and Irene Dubs had been hoping to stay ahead in the class but Manuel found the handling of the car difficult today in the conditions. “It was quite difficult to stop the back from sliding out in the Ford, the conditions were pretty tricky.”

Bruno and Carmo Rodrigues are still holding onto their lead in their Volvo by 57 seconds from Simon Spinks and James Grayson, second in their Ford Escort. The Camaro of Florence Fontaine and Morgan Hector just hang onto the last podium position but Julia and Steve Robertson have moved into ninth in their TR3 through consistency and stealth. Considering their dire position after major baulking on day one, this is a great result so far.

Running in a strong seventh place is Anthony Galliers-Pratt with navigator and wife Fiona putting in a great performance with the timing, maps and road book. Both are loving the topography along the route, Anthony was impressed after he had driven through the Piv Canyon looking way down at the emerald blue waters. “It was Absolutely spectacular, it makes some of the Norwegian fjords look rather puny by comparison. I didn’t find the roads too bad in wet this morning, but they looked very slippy. The toughest for me were the regularities on first day, they were a bit rough and at end of day three, but generally not too bad.

“Yes we are happy to be in the top ten but we have got a good car in our Porsche 911, although I’m pleased I have fitted skid plates to the undersides! You ask why I have a Bentley badge on my jacket?   I have got pre war Bentley and took part in three races this year in celebration of the Bentley Centenary. I raced at the Silverstone Classic and then Goodwood Revival last weekend, all good fun”. Should he have brought his Bentley here instead? “Definitely not, this a much better choice. Fiona is much happier in the Porsche.”

A feature of the rally are the American cars, vintage or classic. Two great Mustangs have been running near each other on the road recently, forming the Mustang Gang. John Yates driver of the red Ford Mustang Coupe,” We had a bit of a crisis but we recovered thanks to our co Mustang team Vincent and Anne over there letting us overtake them at a rate of knots as we had some time to catch up.”

Navigators Joan Gee (with John) and Anne Charron (with Vincent) agreed that sometimes the navigation can be confusing, but Anne said of yesterday’s time control that had cars scattering in all directions; “let’s just say we almost got it wrong”…..

Vincent Duhamel drives the bellowing famous white blue striped V8 GT350. Vincent; “I have been a Mustang fan since I was a two year old kid, this is a replica, it was built for the Peking Paris. What I love is the spirit of the Mustang, it’s a car that changed a whole company and the style of cars they designed. It’s a fun car to have around.”

John wouldn’t describe himself as a wild pony, but he loves Mustangs too. “Since I had this one I really like them, I’ve always loved the look but since I had the chance to drive one, I love it. The 4.7 litre engine is just so torquey, its only got three gears but you can leave it in top and it really goes, there is so much torque.”

All the talk of Bentleys on their Centenary has tended to overshadow the other great marques on the Adriatic Adventure. There are two Alvis Speed 20 SA’s.

Rudi Freidrichs prepares them both, one is driven by his Australian friend Michael Wilkinson navigated by his wife Anne. Rudi; “They are going pretty well although there has been some trouble with the black one Michael is driving. The alternator is not working, so it has become an electric car running on four different batteries! They are charged every night, but Michael had to buy three new batteries.” Michael.” Two are working now so we are OK!”

The friends are considering running in the ERA’s New Zealand Classic next February. Rudi;” We might, we have done the New Zealand event before, I was driving one of Michael’s cars there just as he is driving one of my not very well prepared Alvis cars here.”  Michael came all the way from Australia to compete in the Adriatic Adventure as he felt it was “a nice length of time, with some interesting roads to drive on, also it’s a part of the world I haven’t been in since 1975, a lot of changes have taken place since then. Bosnia was great too, actually there is a good link between Bosnia and Australia as there are quite a few good Bosnian soccer players in Australia.”

Rudi also races; “I race an Alvis Firefly which is a great racing pleasure, a Jaguar C Type and a Jack Brabham 1960 Cooper T53 lowline. I have been rallying for around twenty years, I come from that background and only started racing eight years ago. The best though is rallying pre war cars, you get to explore the world, really get to meet the locals, it’s a great experience.” Rudi is being navigated on this event his wife Helga. Michael is lying fifth in the Vintage Class and Rudi third.

Just when we thought we had lost the pleasure of watching and listening to the Peugeot 504 Coupe, it has been brought back to life; Ian Milne; “We’ve absolutely no idea why it stopped, we changed everything, even the infallible technical support crews were at a loss to know what was wrong. They were just about to give up when we had one more turn of the key and she fired up, she is now running beautifully, so the French V6 is back in again!”  Ian and Andrew Laing have a lot to look forward to, we are only half way through the event.