Field fixed in order for now despite mechanical issues for some

Leaving the steaming thermal mud, gushing geysers and the faint whiff of Sulphur behind in Rotorua, crews headed off towards Gisborne (Gizzy to the locals), a 333 km trip via the side of the Bay of Plenty, a name set in the annals of history. Gisborne was the first part of New Zealand sighted by Captain Cook on Endeavour in 1769. They came ashore to replenish supplies and found plenty as they explored the lush fertile land, naming some areas as they went.

It was alongside this bountiful bay that the first regularity was conducted at Manawahe through 18 kms of lush picturesque jungle that flattered then deceived with tortuous twists and turns. The thick foliage meant corners were obscured, crews having little idea of the curves ahead to try and help them gauge their average speed in case a timing point popped up.

Once out of the jungle ‘wake up call’, the relieved teams motored around the coastal roads with some superb views of lakes and the Bay of Plenty. Mostly however, drivers and navigators enjoyed some pure classic driving roads with little of no traffic to hinder their progress.

The shorter 16 km Stanley Road regularity provided no clues as to the challenge that was to face the rally after the short rest halt at Opotiki for a quick bite at the quaint Hot Bread Shop Café.

For the ERA New Zealand Classic Rally to enter the ‘Rally Road of the Gods’ was a privilege, to come out of the other end of 47 kms of sheer rally heaven in tact was a feat. The sinuous track with a surface of small ball bearings to slide you around, wound through gorges, alongside steep drops through a mixture of jungle, forest, rock walls and tight harpins. And yet there was a rhythm to be had, a flow which could help as drivers desperately tried to stay on time, being urged on by their navigators or not, depending on how ill they were feeling on the Motu Big Dipper.

The Road to Motu, was divided into two regularities, 16 kms then 22 kms, which seemed to take an eternity such was the variety of the challenge once in there against the clock. It is one of the World Rally Championship’s greatest roads used for competition stages. A classic which witnessed a young Colin McRae leave such a mark on his rivals in 1993 when he pulverised them all over the Rota Road by over 35 seconds on his way to his first ever WRC victory, the first of three Rally New Zealand wins.

The astonished New Zealand Classic crews found it hard to believe when told just how fast McRae had been, but then they had their own stories to tell.

Stephen and Collette Owens, Jaguar SS100 14th O/A 2nd vintage class; “I’ve would never have believed that we would be able have had a go at such a famous stage in something as precious as this Jaguar! It’s frightening when you see the drops, the cliff walls, the speed, the acute corners you are trying to get round, and you are going hard into them. But with this surface it’s like being on marbles. So far on this rally, this has been the most adrenalin packed experience, how on earth Colin McRae did it driving twice or three times faster than us I don’t know, I just can’t believe it, he was awesome.”

Bill; “Erm…. you can take the long pause as a clue to what I think as I try to edit my answer. To me it was right on the edge, I can’t go any faster than that without getting into big trouble, the Bentley wants to go straight on, but once you dig in on the corners it will turn but if you’ve oversteered a little you are just praying it will dig in before you get around the corner. I’m there with my daughter with sheer drops at the side when it came a point that I said, slow down, it’s a game of fun, so I backed off a bit.”

Nick and Serita Sleep, Mercedes-Benz 230SL Pagoda, 24th O/A. Serita; “I enjoyed it but don’t tell Nick! It was quite hairy, quite frightening especially when you looked down at the drops or saw how close the rock face was. Somehow it was surprisingly enjoyable, Nick drove well, I trusted him.”

Otakar Chladek and Otakar Chladek Jnr, Mercedes-Benz 350 SL,12th O/A, Jnr; “Those two Motu roads were really tough, we were very happy just to survive. I’m glad my father didn’t manage to kill me! The other problem was that I was really feeling ill for most of the time in there.”

Bertrand and Charlotte Van Houtte, Porsche 911, 7th O/A. Bertrand; “The Motu Road was very tricky, amazing roads, a real challenge but still great fun. The last section again was very tricky but not scary, I would prefer to say a big challenge”.

Olivia Hunt “Slightly scary is the answer, especially the first 6 kms, I just gave up with the timings. I felt a bit sick but then poor Julia (Kirkham) was very sick. We were very lucky with timing in another way, something had broken in the magneto but it happened just as we pulled in to the lunch halt, the mechanics were there as we drove in. We couldn’t have picked a better spot for things to go wrong!”

Mike and Lorna Harrison, Volvo PV544, 3rd O/A; Were stopped by the side of the road mid morning. Mike; ”We were stuck in 3rd gear, we took the carpet out and the gear lever fell out. Luckily the mechanical assistance boys weren’t that far behind. Owen managed to get screw driver into the box to free it but then the collar around the gear lever had come loose. Then there was a bit of spirited driving, skipping the lunch break to try and reach the time control. We just made it with no penalties!”

Peter and Louise Morton, Porsche 912, 21st O/A. Louise; “ I am loving it, the first couple of days were tough then on this morning’s regularities we got two zeros! Sometimes it just starts to click, the more you learn. The Motu Road was jolly tough, I haven’t got much to compare it to as we are so inexperienced, but our car was suffering in there and the boys have been trying fix the fan belt. A lot of people were getting out of their cars feeling sick, you have to concentrate for such a long time, especially that last one for a good thirty minutes.”

As the rally approached Gisborne after the fury of the Motu Road, Louise was asked about the history of the area; “You mean Captain Cook, the Bay of Plenty? I know a little bit as he was born in my home town of Whitby, at our school all the schools houses were named after Captain Cook’s ships.” 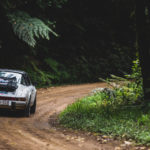 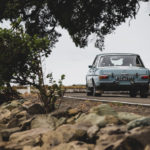 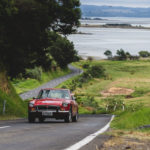 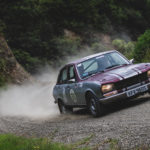 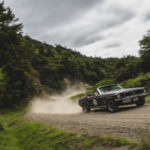 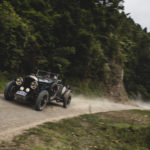