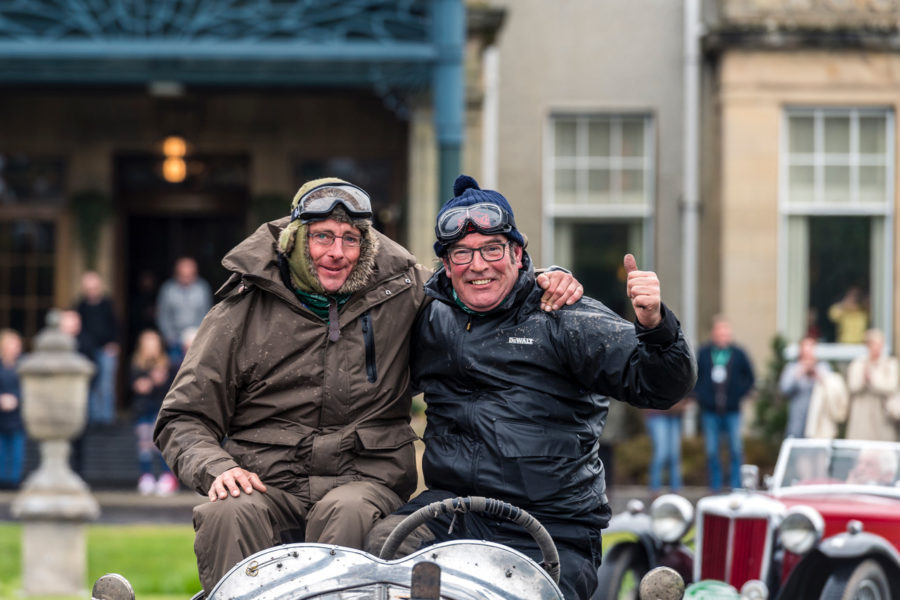 Bill Cleyndert and Leigh Powley in their 1928 Ford Model A held on to win a tense battle against Paul Crosby and Ali Procter’s MG TB Supercharged to win their first ever Flying Scotsman. Having taken the lead on Saturday when Crosby’s MG suffered clutch selection problems, the two cars took to the fray on Sunday with just 23 seconds separating the pair. Crosby and Procter had said they were going to push hard.

With four tough tests and exacting regularities to go on the route from Turnberry to Gleneagles the leading nervous crews headed out to do battle, others just to enjoy the great rally and achieve a finish.

Trouble hit the leading pair on the very first regularity of the day as Bill and Leigh encountered a tractor and trailer and were losing time; Bill took up the story, “It was one of those heart attack moments, we lost time but couldn’t do anything. Just as we got through that when an articulated lorry came down the same single-track road, we thought that was that.”

However, it was even worse for Paul Crosby and Ali Procter as they were stuck for over 50 seconds. Ali;” Sadly we got the worst of it, 57 seconds and that just dashed our hopes of catching Bill and Leigh.”

But there was to be another twist, Bill Cleyndert has said at the lunch halt that he was a bit worried by a half shaft noise on the Ford but dismissed it as hearing noises that aren’t there when you are in a nail-biting finish. But the shaft did work loose, and Bill had to tighten it, losing 50 seconds to Crosby and Procter over the last two tests.

Paul, “We needed one more test and we would have got them, but I am happy for Bill and Leigh and very happy with second!” Just 11 seconds separated the battling pair at the end of three days and 700 miles of competition. “That was such an exciting finish, we did it just by the skin of our teeth,” added Cleyndert. Navigator Leigh Powley never made a mistake on the tough event, his navigation skills and calmness under pressure made the difference.

He was so emotional just after triumphantly going under the finish arch at Gleneagles that had to go off and compose himself. “That was emotional but none the less after all those tough tests, the ups and downs, we won. What a great event!”

The reputation of the Flying Scotsman as an enthralling event continued as the battle for third place honours went the young duo of Theo Hunt and James Gulliver in their 1933 Frazer Nash TT Replica who had been closing in on Peter Lovett and David Richards all day finally getting past just before the lunch halt. Theo said; “We thought there was a chance as we closed in, but we would have been happy with fourth. To take a podium after all that effort is great, James my navigator was a real hero and deserves a heap of praise as does the little car. James should also be very proud of the fact that he beat a World Champion navigator on only his third rally!”

David Richards was magnanimous as he handed out praise to the young pairing despite being relegated to fourth place. “That battle has gone on throughout the event, but their spirit and determination of Theo and James is to be admired. We need youth in the sport rather than us oldies!” Peter Lovett though was a bit disappointed, “We dropped off a bit.”

Whilst the top crews battled for honours many battled just to finish, some didn’t even manage that but were determined to get to the finish and see their friends go under the ERA Flying Scotsman finish arch at Gleneagles.

German crew of Wilfried Schaefer and his navigator wife Sandra were very upset at having to retire last night after they lost first gear in the 1934 Talbot 105 Alpine. Said Wilfried,” We were very upset, we really wanted to finish but we decided to have a nice ride with our car in the recovery vehicle to Gleneagles to see our friends over the line. But we were first car out of the transporter, so we won the race of the retirements!”

The Scottish weather proved to be a bit cloudy and dull with some rain, which the Scots call ‘dreich’ but that didn’t deter the crews from enjoying the final day of motor sport on the Flying Scotsman. Teams headed straight from their Turnberry hotel to the airfield close by for a test.

The 1948 HRG 1500 of Keith Ashworth and David Roberts was sliding around over the mixed surface of concrete, dust and stones but got a puncture. Keith and David limped to the finish and started the long process of changing the wheel starting with the two strapped to the back of the little car. They were back on the move ten minutes later, eventually finishing the event 24th.

Car four, Belgians Lieven van Hoylandt and Wim de Sutter appeared at the finish line with a marker cone under the front of their 1922 Bentley whilst James Tibbetts and Kevin Dodman’s Talbot 105 Brooklands sounded and looked just like it’s racing brother from banking of the famous old track in Surrey. The Belgians finished 34th whilst the Talbot was 32nd and 4th in class, just off of the podium steps.

Car number five finished fifth, a wonderful wedding present for Andrew and Philippa Bailey in the 1923 Bentley Supersports who actually displayed the ‘Just Married’ sign on the back of the car. However, their new alliance has brought luck today, as Philippa explained;” The headlamp fell off but luckily the nut was still on the running board, so we were able to put it back together. However, I must say I’m exhausted, the Minimoon was not quite as we expected, the spa looked like a great option last night, but really it was a great event. The champagne will taste good later.”

Irishman Eric Kavanagh and his son John from Ireland were typical of the crews just loving the roads and driving experience. As he arrived at the lunch halt Eric was still beaming from the drive. “We have just had the most stunning drive over Dukes Gap, the roads were sweeping the scenery amazing and then there was a little chase going on at the same time, great fun. It’s a great car too, this is an original 1929 Bentley four and a half litre so it’s a bit long for the tests, but the Bentley Drivers Club says that’s how they should be! She has been going really well, I hope that continues as I have to drive her back to Dublin tomorrow morning.”

Overall it was another wonderful edition of Britain’s premier vintage rally, with a challenging but enjoyable route devised by the mastermind that is Anthony Preston. The crowds that lined various sections of the road along the way were testament to the passion and reverence that the world still holds for these pioneers of motoring, that prove that age is no barrier to ability. Whilst the cars continue to mature, there was a wonderful mix of eras on display within the ranks of the competitors, with a fine spread of youth and experience present on the podium alone, as well as throughout the field. From here we look to the future and the 12th running of the event next year, on which we hope to see many of you present. With entries open before the dust of this event has even settled, I’m sure any would be competitors will have to get in fast, to take part in Britain’s premier vintage rally next year

To watch the Flying Scotsman 2019 – After Dinner Film – Coming soon