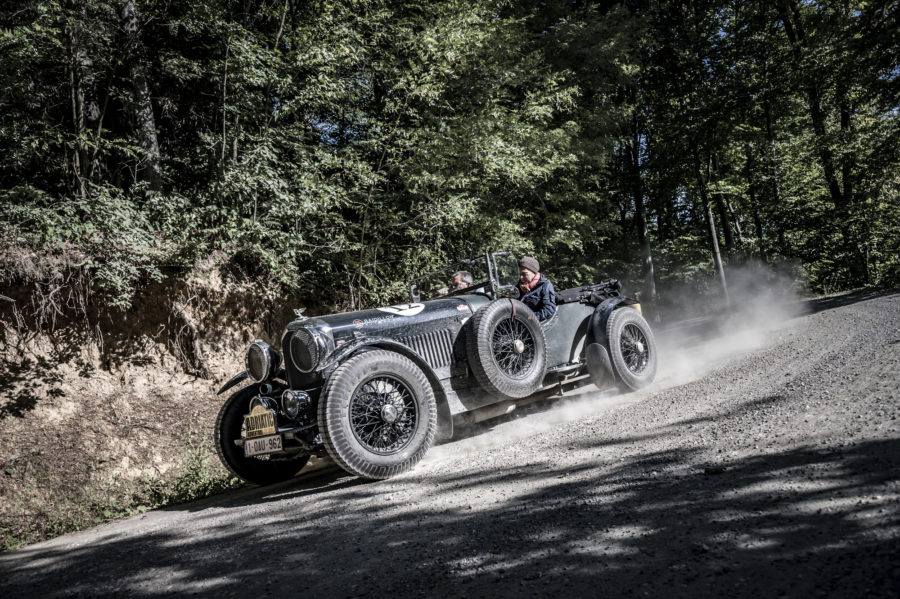 A shorter yet sharper day starting with a challenging gravel hill climb then a timing point on the third regularity which sent cars in all directions, shook up the top ten. New Vintage Class leaders emerged, the Swiss crew Manuel and Irene Dubs, but the overall leaders Bruno and Carmo Rodrigues hung on to the number one spot in their Volvo 164, the car a veteran of the Peking Paris Motor Challenge.

Bruno; “ We are really pleased, mainly because the event is magnificent, lovely landscapes, great organization and lovely people, we are loving it. It’s our second time in an international event, we did London to Lisbon in 2017.”

Carmo Rodrigues; “From my point of view the most difficult part I think are the tests as the car is not built for this, it is too big and heavy.” Bruno continued; “Yes the car is really heavy, also our tyres are almost like truck tyres because the car was built for and has competed on the Peking to Paris Motor Challenge in the hands of another Portuguese driver. But we would like to compete in the next London to Lisbon, sadly we were unable to do it this year.” As they are the only Portuguese crew on the event, it was suggested to Carmo that they must win and uphold Portuguese honour, “Yes we hope so, but it wont be easy.”

Simon Sparks and James Grayson have closed in fractionally on the leading Volvo keeping the pressure on in their 1969 Ford Escort, they are maintaining second place and look ready to pounce.

Florence Fontaine and Morgan Hector proved that the unlikely rally car, a Chevrolet Camaro, can cut it as the French duo moved into the podium positions in third demoting Timothy and Matthew Wheatley’s Volvo 122S Amazon to fourth. Graham Platts and Neil Ripley will be happy as they made progress back up the field after errors on the test yesterday afternoon. Their big Healey is up to sixth.

Anthony and Fiona Galliers-Pratt are proving a great combination as their silky Porsche 911 has moved up three places to seventh, Anthony has been smiling throughout. Up four places is the glorious sounding Aston Martin DB6 of Julian Reddyhough and Adrian Pope, into the top ten for the first time since the car was misfiring with the engine cutting out, stopping them on the first day.

The big losers today were Stephane Huynen and Marleen van Praag in their Bentley Mk V1 Special as they dropped down to 12th and lost the lead of the Vintage Class having been fourth overall at one point. Stephane: “ We hit a rock which unfortunately pushed up against the engine, something had to give and it was the manifold which was broken. With local help we have been able to fix it.”

In total contrast to the top ten battle and class battles, Matthias Bittner and navigator Denis Billion in their Saab 96 Rallye are proving to be very entertaining on the rally, not just because of their great looking and sounding Saab but because they are really are having fun!

Matthias said; “We missed five goals but the Saab is going perfectly, it consumes a little bit too much oil but it’s old. The first regularity was a bit sh****, but the navigation! There are certain navigator rankings that start with good, very good, then very, very good. After that, excellent. I just have a good navigator.”  Denis butted in; “I fall asleep sometimes, that’s the problem, we have a nice lunch and maybe I have a little knap, we need to recover, but I would say that he is a good driver!”

Mattias continued; “I use a lot of creativity in the navigational context, when Denis says go straight but there is an interesting road on the right, I take the right one. There are reasons why we sometimes start first but come home last car.  We take a lots of photos, sometimes during the regularity. We of course are not the youngest, and tend to have prostate problems plus I had a stroke a little while ago so the combination of these two means we have to have to drink a lot. Then we have to make lots of pit stops. Sometimes we are so fast that we miss the turning and have to come back again – we have probably covered the longest distance of everyone in the whole rally but we are here just for the fun!

There were some ruts and potholes to negotiate for the teams caused by the passing of the logging trucks although there was a great balance of a superb maze of twisting tarmac on the way to the cultural centre of the Balkans, Sarajevo for the night halt. It was a timing point in regularity three that threw many causing a few penalties as the navigator of car 36, Nicole Whitlock driven by her husband John, explained.

Nicole; “It seems people were all over the place, especially in regularity three, but somehow we all ended up back here! We had some tricky regularities, the navigation has been a real task, there were lots of different speed changes been plus some pretty slippery gravel but it has been a great day. The Mercedes is new but John has driven it really well, it handles nicely. We hope that continues as we are hoping to take the car to New Zealand for the Classic in February next year.”

Many would be excused for thinking there is an ‘Off Road Class’ on the Adriatic Adventure but there isn’t as the Land Rover Defender crew of Penny and Stephen Gale explained.

Stephen; “It’s going very well, we have never done anything like this before. The regularities seemed like a strange concept, but if you pay attention you can get it right. You don’t need a Porsche or a Ferrari you can just do it in a Land Rover, if you hit those seconds right and don’t go too quickly.” Penny explained the use of their modern Land Rover which doesn’t comply with any of the classic or vintage categories. “It’s a bit sad really we wanted to use our MG which we had got specifically for the event, Stephen had been doing a lot of work on it, then we had to get it valued and tested as it had already passed it’s road worthiness tests, but they said it was not! That was just a week before the event started. So we asked if we could tag on at the back in the Land Rover and learn about regularity rallying, happily the organisers let us take part.”

The 110 does look the part as if ready to go ‘off road,’ Stephen said; It is, we actually we built it for the African Eco Rally which is the old Paris Dakar from Monaco through Mauritania and GPS challenges in the Sahara which were fantastic. This the furthest we have ever driven the Land Rover on roads that are not desert!”

The combination of gravel to tarmac mixed surfaces, sunlight to shade on regularity one, the hill climb then descent out of Banja Vrucica did catch out one crew, the German pairing of Bernd and Christiane Dannenmaier. They ended up nose down in a ditch in their Porsche 911S which was luckily reasonably soft and absorbed some of the impact as they slid off. Both were fine and uninjured fortunately with little damage to the lovely Porsche other than the front left bumper which had to be pulled out with tow straps by the mechanical assistance team.

Christiane; “ There was asphalt in the bright sun then gravel in the shade, we just didn’t see it and went into the ditch, luckily we are fine.” Berndt; I didn’t see the gravel it was too shiny, we were both OK but then I was worried if I had broken the front left suspension but when the boys pulled it out it was just the body work, so relief, we can win again!”  Bernd was asked if he and his wife would like to see the doctor just for a quick check, he answered; “ I am a doctor!” All is well that ends well.