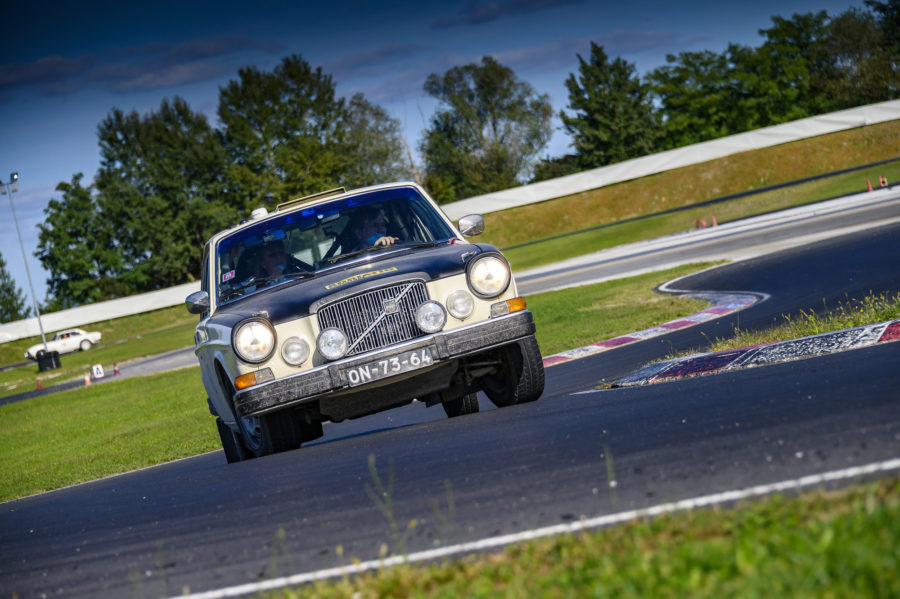 Back to the top – Day One leader retakes the overall lead

Bruno and Carmo Rodrigues from Portugal have taken back the provisional lead they established on day one of the Adriatic Adventure in their Volvo 164, just ten seconds clear of Graham Platts and Neil Ripley who survived a scare in their Austin Healey 100M when it became stranded between the border of Slovenia and Croatia in No Man’s Land.

Bruno and Carmo climbed back up to the top after great performances over two regularities and a test at a kart facility, which also leaves them first in the classic class three. Graham and Neil were pleased to make it over the border from Slovenia into Croatia after their engine overheated in the queue for the border post. Said a relieved Graham now in Zagreb; “ she just boiled up in the heat and slow traffic as my auxiliary fan had failed. We left her to cool down for half an hour then managed to drive back, but I hope the mechanical assistance crews can now help to fix the fan.”

Third overall provisionally are Timothy and Matthew Wheatley in their Volvo 122S Amazon but after a stirring performance to zero three Time Controls in the regularities this morning, Stephane Huynen and Marleen van Praag are fourth in the Bentley Mk V1 Special. The car and crew are performing miracles against the younger rally machinery over difficult roads. The first regularity over a short wooded ridge in regularity was over a very mixed surface. The dust was thick as sunlight tried to shine through the tree canopy above, managing to create shafts of light adding to the difficulty of picking out the surface when competitors were in a hurry. The big Bentley ended the day fourth overall and first in the Vintage Class, a great effort by the crew.

Slipping to fifth from first were the crew of Stephen and Samantha Hardwick in their Alfa Romeo Giulia GT. Stephen was heard to say at the end of the day; “what a terrible day, a terrible day!” he explained further. “What went right – nothing! Bad regularity, a wrong turn then stuck behind a vintage car on the last test, if you add them all up we will probably be mid table by tonight. I thought about going down the inside of the Bentley on the test but then I thought this isn’t F1, it might be inappropriate for our kind of event so I held back. The seconds lost there were not a big deal compared to the 40 second lost on the regularity, I clawed some of them back after we took a wrong turn and ended up in a farmers house.”

Morgan Hector and Florence Fontain are really entertaining in their big black Chevrolet Camaro SS, they are currently lying seventh overall but are hoping to get some work done on the car tonight to stay in contention, Morgan; “The Camaro got wings, she has been flying but now she is wobbly, there is a problem with a bearing but we hope to find a fix this night in Zagreb.” Florence added, ”Of course I am enjoying it, it is so quick, but we would like to keep going.” The Camaro was then on it’s way from a Time Control by a very scenic Monastery, then survived another challenging regularity in tact over switch back roads with blind crests over the steep forest tracks. Repairs await!

Enjoying every second of the roads was Edmund Peel and Sara MacDonald in their Porsche 911 RS. Edmund; “the roads are fun to drive, the scenery is superb but the car likes the gravel, she was built for it. I love the gravel surface but I actually prefer the link roads, they are great, we cant get our heads around the regularities although they are still good to drive.”

The same goes for Josef and Heidi Dillier in their Chrysler 70 Roadster, “We are really enjoying it, it’s especially good having my wife with me navigating. But the power of the engine is a little bit low so we will fix it! I’m trying to drive as fast as I can but I only have around 65bhp, I need more horsepower for this rally.”

It is great to see Steve and Julia Roberts back in action in their Triumph TR3 after Steve won the recent HERO Summer Trial with his son navigating. That victory and the possibility of Robertson Junior taking more navigator seat time seems to be the cause of some contention in the Roberston clan; Julia answered the assertion that last time the team was out it was her son navigating and they won!

“ I know, I taught him all he ever knew about navigation but I was deeply displeased when they won, I thought that was a bit much, but we will let him have a go again although I am afraid the big trips come to me”. Steve answered, “I think well bring him in gently and Julia can leave gracefully”.

Julia changed the subject back to the rally in hand; “we had simply the worst first regularity, which dropped us to the tail of the field but we have made steady progress back up the order since then.

“We had to follow a logging truck yesterday getting badly baulked which made us late for a control but apart from that it’s OK”.  The Robertsons have progressed back up to 14th overall.

There is just a great mix of classic and vintage cars competing on the Adriatic Adventure, there are two Vintage Citroens out celebrating the marques 100th year. Colin Banstead and Nicholas Reason are in a Citroen 11B Familiale, Colin gave us more information; “ It’s a 1939 car which took us six to eight months to prepare” His navigator Nicholas was also loving the car but not his job; I’m getting my head round the navigation but it is a big challenge, an awful lot of information coming at you at once, you have to process it quickly and get on with it. The major issue is it’s my very first rally!”.

The final fun of the day was to be had at the test around the kart track, a new facility with a great configuration of bends plus an equally new surface. None the less it was tight for the big Bentleys although Yves Faymonville and Kerstin Lore Schmitt gave it their all in great squealing sideways Bentley Speed 8 fashion. Yves;” we were a little bit sideways as the car is a little bit heavy and things got a bit slippy, but we enjoyed it” Kerstin added; “ he is a good driver, I always feel safe with him!”

Finally, heroes of the 2019 Peking Paris Motor Challenge, David and Susan Danglard who finished second overall in the epic event, are competing in their Porsche 911 on the Adriatic Adventure. Said David; “This of course is a very different event to Peking Paris, here it is all about regularities, they are OK but not I prefer the long endurance events. However, this is a good event, the roads are amazing, great to drive and I really enjoyed the blast around the kart track.” As he should, David owns a world wide karting franchise, so had he made an offer for the track yet? “It is a good facility, maybe we could think about a franchise!”