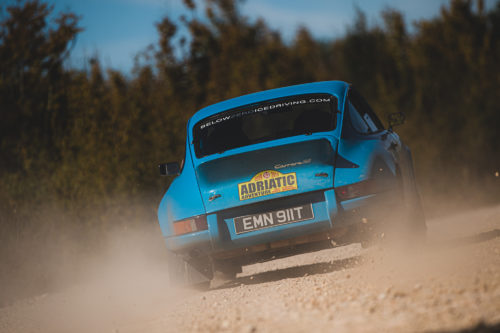 The leading crew in the Adriatic Adventure had quite a scare today when their Volvo 164 ran out of brakes altogether! The Portuguese driver Bruno Rodrigues explained; “It wasn’t braking at all, but the incredible mechanical assistance crews were right on it and able to give me at least some brakes later. I think there is a leak towards the back, we kept on topping up fluid and hope to fix it tonight.

“We lost 10 seconds overall but maybe pulled a little bit back as we managed to get two zeros on the last regularity, it was amazing navigation by Carmo.” Carmo had been a bit worried in the morning as she had checked in five seconds early at a control, but was Bruno now worried about holding onto the lead? “There are two days to go so let’s see.”

As a result the second place crew of Jim Grayson and Simon Spinks in their Ford Escort have closed the gap by ten seconds as the event edges towards the finish in Trieste on Sunday, showing just how consistent the crew are, ready to capitalise on any further issues.

Behind them close battles continue to rage. Timothy and Matthew Wheatley in their Volvo 122S Amazon have swopped the final podium place with Florence Fontaine and Morgan Hector’s Camaro on at least three occasions. The Chevrolet crew are currently just four seconds behind the Volvo which also leads Class 2 in the Classics. There is a war behind them, not just for the overall positions but the podium places in Class 2.

Steve and Julia Robertson in the TR3 hold fifth with Graham Platts and Neil Ripley just two seconds behind them in the Austin Healey 100M. Michael and Lorna Harrison’s Volvo PV 544 is only eight seconds adrift of the Healey in the big Class 2 fight, although as Graham Platts navigator Neil Ripley suggested, his driver was more concerned about his dirty car! “We hit the big puddles towards the end of the last regularity which covered the car in dirt, look, he is more concerned about cleaning the car than the results of the reg!”

Just outside the top ten but achieving the lowest penalty score of the day were the German crew of Bernd and Christiane Dannenmaier in their Porsche 911S. They dropped just 11 seconds all day.

Moving steadily up the field in an event favourite, the Aston Martin DB6, are Julian Reddyhough and navigator Adrian Pope into eighth overall. Julian’s car suffered early issues but has been barking it’s way through the regularities with it’s engine very much on song since. Julian; “The first day was a low point, breaking down within two minutes of the first regularity was not how we thought our rally would pan out. But since then we’ve been alright, we think it was ignition, or condensers which the mechanics found for us, so we had a box of all sorts of bits sent out, condensers, rotor arms, you name it. Of course sods law is that we will probably never have to open the box. My favourite moment so far was the last hill climb on Day 9, pulling ourselves up around the hairpins and then sprinting up the next one, we didn’t make the time but neither did anyone else. Yes we love the noise too in fact I think I can still hear it!”

After leaving Split, the climb into the mountains was spectacular. The views over the Adriatic with Split stretched out far below were incredible with the airport looking like two distant stripes on the ground. The sky was already azure blue and the temperature rising as crews headed into the first regularity of the day. It was an intriguing road winding through dry stone walls in the mining area of Drnis and onto a plateau.

Past a monastery and the second largest waterfall in Croatia, the route had everything, stunning views and great driving roads.

It was a big welcome back to the rally for David Ferguson and Michelle Pelleriti. The beautiful drop head XKE or E-Type, with it’s neat luggage case strapped to the boot had been missed by many. David explained what had happened. “We didn’t have paper work for Bosnia, I had a co driver who went home sick with some of the paperwork in his bag. We lost a couple of days so we took the time to go back to Trieste and then Venice and until we got the permissions and managed a day in Bosnia.                The car is going great, real smooth. There was a small problem at the beginning with a cam wheel out of adjustment, but we got that sorted. The luggage box on the trunk? Well it really suits the car but it’s a bit of a family thing anyway. The car is 1966, the same age as me!

“And now I have new navigator as Steve got sun stoke, I made a call and Michelle (Pelleriti) was here in 48 hours, she has never navigated before but she is doing really well.”l

It is also good to see a BMW doing well in the rally, Dirk and Alexadra de Groen are lying 17th overall but most importantly, fighting for third in Class 4. Dirk; “ It is just so competitive in our class there are so many breathing down our necks, we want to try not to drop too much time over the next couple of days, stay on track and try not to make a wrong turn. But this is great, tremendous driving roads, amazing scenery as well. Yes I am very happy with our 1971 2002. I used to rally big really old Mercedes but now this is the way to go!”

More returnees, after sadly having to retire their TR6 on the very first day were Humphrey and Mark Walters, father and son both pilots by trade. Humphrey; “ We weren’t going to quit. We went to Geneva to get my sons 4×4 Fiat Panda. But first we tried to hire a car in Trieste, then we tried to get a flight, we went to Ljubljana but couldn’t get a car but got a flight which was cancelled. Eventually we got to Geneva and back here, over 900 miles in the Panda. That’s how much we enjoy our motorsport and classic car rallying. But the best thing about this event is the brilliant people!”

Also hoping to return is Josef and Heidi Dillier in their Chrysler 70 Roadster which sadly broke a cv joint the other day. The 1930 car was spotted in the car park tonight – here’s hoping!

For some it has been a real family affair, John Todd has had two different navigators from his family. “I started this rally with my son Matthew up to Budva, he was concerned about his business so he had to go home but then my daughter Joanna flew out to Dubrovnik and then bus to Budva to take over as navigator, so yes it’s been a family affair. We’ve had a lot of fun, the car had been going really well apart from a broken side window with a bit of glass around, very enjoyable. Then my wife is joining me on Monday for a slow pleasurable drive back from Trieste.  My favourite bit of the rally? The people, they are really good, very nice people, we have had a lot of fun with them.

The final control of the day was situated in a very natural unspoiled rustic fishing village reached by a long winding road down into the port. Novigrad was once a pirate refuge but no longer, it is all peace and tranquility now! With a handful of locals looking at the cars, crews had a bit of time to chew over another great day on this adventure and ponder what the last few will bring.