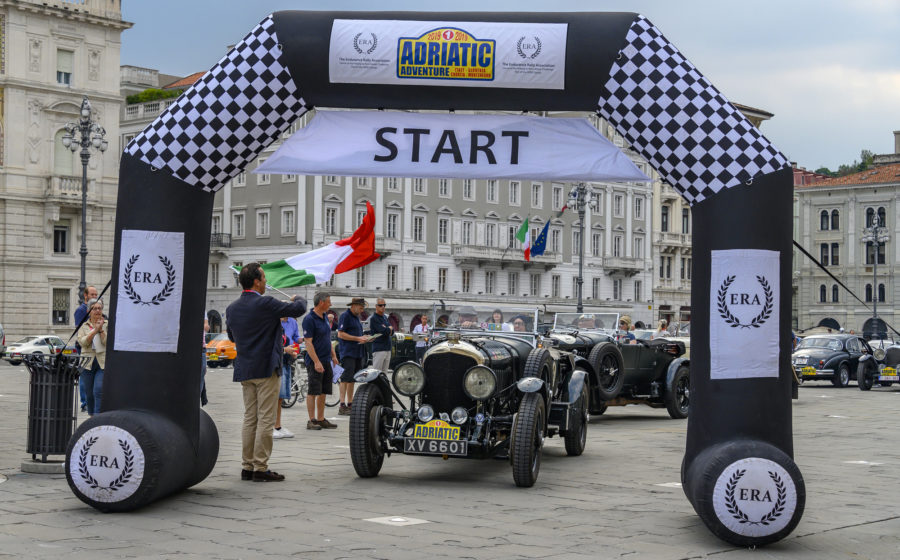 55 cars started the Adriatic Adventure from the historic Piazza Unita d’Italia in Trieste, a truly wonderful mix of vintage and classic rally machines which put a smile on the face of HERO Group Managing Director Patrick Burke. After he had flagged each crew off the line for their 12 day adventure he explained why he was so happy.

“It’s a fantastic entry, I didn’t think we would have so many cars, I’m delighted. There are a lot of HERO participants on this ERA event and vice versa we had many ERA regulars on the Iceland Saga which finished just last Sunday, so there is a big cross over. The array of vehicles is superb, there is a a stunning and rare Lancia Aurella American Spider with an all female crew, it’s great to see the ladies on event, but most of the decades are covered by such a variety of cars it really is a spectacle to see them all on one rally.”

Once the cars had climbed up the roads out of Trieste they were straight across the border into Slovenia which provided some steep and very narrow roads winding their way over the rolling hills of Vipavske Brda. As the roads steepened they followed the rock face, some of which was overhanging the thin strip of tarmac like a canopy.  Then suddenly the tarmac stopped and the surface turned to loose, smooth gravel, ideal for a regularity. Sadly not for Humphrey and his son Mark Walters who knocked their exhaust then heard bad noises from the engine so had to stop their once immaculate Triumph TR5, now covered in dust.

The father and son duo are both pilots, in fact Mark’s last flight before this adventure was ferrying guests into the Goodwood Revival last Sunday. Said Humphrey; “ I think it has maybe dropped a valve which could have seized the engine. It could be pretty terminal which is a great shame as this is our first ever rally and we have only done 60 miles! The problem is we have just finished the car, haven’t done enough road miles with the Truimph. It was a tight deadline, then I was away so I only have myself to blame. If it is terminal Mark and I are hoping to carry on somehow, maybe we can hire a car and get back in the rally?”

It proved to be a difficult first day for a few other runners as well. The Alvis Speed 20 SA of Michael and Anne Wilkinson was being repaired right in front of the Grand Hotel Union in Ljubljana, Slovenia at the first night’s halt. Alvis expert Rudi Friedrichs was working away under the bonnet aided by ERA Technical Assistance crew member Jack Amies who explained the issue; “ This is Rudi’s car. After the Alvis arrived from it’s long journey to start the rally he had a charging fault with his dynamo which had over charged and damaged the wiring in the regulator. So we changed it for an alternator which luckily he had in his boot! We are just checking everything is now charging properly so the power can driver the fans and ancilliaries.”

Even the car running number one on the road, the Bentley four and a half litre Le Mans Tourer of Swiss husband and wife crew Roland and Helen Frey didn’t escape the first day gremlins. Roland; “it was a lovely drive but we had two hiccups along the way. Firstly my wife, who is also my navigator, accidently touched the stop watch on the second regularity so we didn’t know where we were. It can happen but then everything went smooth as we picked up again, but then we touched another car luckily nothing much happened but it just wasn’t the best way to start the first day. At least the Bentley is great, it just goes and goes!”

For Bruno and Carmo Rodrigues in their Volvo 164, all went perfectly well. With just 14 seconds of penalties they are the provisional overnight leaders from the beautiful Austin Healey 100M of Monte Carlo based mathematician Graham Platts navigated by Neil Ripley in second. The car was last seen on the HERO London Lisbon Rally in April.  Manuel and Irene Dubs are third in the big Ford Coupe but they provisionally lead the Vintage Class. Manuel clearly having fully recharged his batteries after a successful outing on the epic Peking to Paris which finished in July.