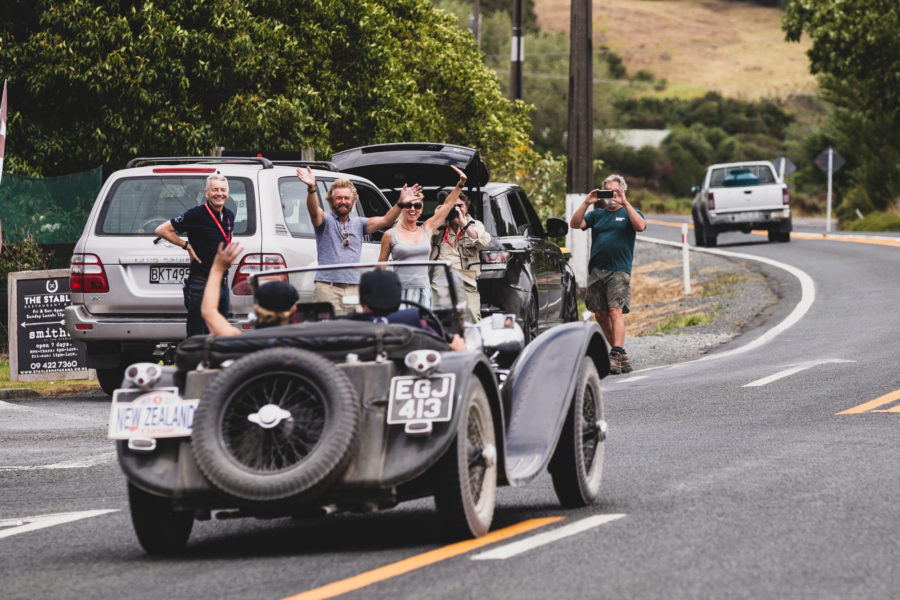 Shake up throughout the top ten

When a Talbot becomes a Midget

All change as Belgian Peking to Paris stars Filip Engelen and Ann Gillis moved into the lead of the rally for the first time in their recently acquired Porsche 911 Targa. At the same time, Mike and Lorna Harrison who have not been out of the top three since the New Zealand Classic started, moved back into second place in their Volvo PV544.

Climbing into third from ninth on day one, Sherif Hwaidak and Yevhen Harashchenko are part of the top ten shake up in their Porsche 911 Carrera.

Adrian Hodgson and navigator Mark Bramall have retained fourth place in their rugged Peugeot 504 Ti, whilst another mover and shaker, mainly of the ground, is the hairy chested Ford Falcon of Steve and Samantha Hunt, into sixth place despite a catalogue of issues today. This included boiled brakes which locked up in front of motorway traffic on the way back to Auckland.

The major movers after a stunning performance in the big 1926 Bentley 4 ½ Litre Open Tourer are Martin and Olivia Hunt, from tenth to seventh place just seven seconds behind the V8 Falcon. Olivia was feeling quite sick after the first dusty and twisty regularity of the day, yet she had been determined not to lift her head from her road book and speed tables in the quest for success.

Into the top ten comes Bertrand and Charlotte Van Houtte’s Porsche 911 but out of the event sadly at the moment with a broken differential carrier is the wonderful 1935 Talbot of Peter and Gris Gordon. Somehow they have managed to turn their stricken Talbot into an MG Midget so they can carry on rallying, so we await the arrival of the metamorphosis!

The excitement of the shake up was matched by the road side excitement of motor sport fan and former racing driver Noel Edmunds, recently domiciled in New Zealand. Along with his wife Liz, they waited then waved as the cars passed them in Matakana north of Auckland.

The long time star of UK TV and Radio with huge prime time BBC hit shows such as ‘Multi Coloured Swop Shop’ and ‘Noel’s House Party’ and more recently Deal or No Deal on Channel 4, was cheering and urging cars on as they passed him and wife Liz. Both sampled classic car rallying a couple of years ago as the BBC filmed the couple competing in the ERA ‘Road to Saigon’ Rally when they successfully drove an MGB GT.

Noel Edmunds; “I just love it. We competed around Vietnam, Thailand and Cambodia a couple of years ago but we said we must do an event properly because we were making a programme for the BBC so we weren’t really competing as the film was the priority. We wanted to do this rally but we didn’t get here soon enough to sort it out basically, we have not long moved to New Zealand. We couldn’t do it justice, but we can at least be envious of everyone who is going to have an incredible three weeks on the New Zealand Classic.

“Just seeing these cars and the happy faces reminds me of how much enjoyment we had and how much I love classic rallying. If we find the right car we have to do one of these rallies, clearly not New Zealand, we have to find another event now.”

Crews were only twenty minutes out of their colonial serenity in the historic town Russell when they were rudely awoken by the dust and grit of the first regularity, a real twister and tester in the tightly packed forest, so much so the sun couldn’t break through. The second regularity, Waipu Caves was another WRC Rally New Zealand Classic, a favourite of World Champion Colin McRae who won his first ever WRC event in New Zealand.

Whangarei Kart Track allowed competitors to slide around and the slick Porsches to make up some time, but the big tester of the day was the 22 km regularity at Tahekeroa. “It was really long and quite tough but we got through it alright” said Olivia Holroyd who is navigating her father Bill in their Bentley 4 ½ Litre. The father and daughter combination were busy conducting routine maintenance on the Bentley, fastidiously greasing all crucial 16 points on the vintage green machine.

Brian Shields; Ford Mustang, 25th. “The gearbox mount may have broken or we have hit the plate hard underneath so it is hitting the gearbox causing the noise, we hope so as we don’t have another  gearbox mount.”

Steve and Samantha Hardwick Ford Falcon 6th; On the kart track I entered the chicane from the right instead of the left, luckily the penalties weren’t too bad. The worst was the hydraulic hand brake, Sam held it on in the fuel station as we don’t have a starter motor but what we didn’t realise was that the phone lead jammed in the handbrake so gradually we were getting slower and slower until the brake fluid boiled stopping us and the traffic on the motorway. I had to bleed off the brake pipe, but we still managed to get into the control on time! Hopefully there is a new starter motor being delivered to the hotel tonight!”

Martin and Olivia Hunt, Bentley 4 ½ litre Open Tourer, 7th; Olivia, “That last regularity was knackering. We didn’t get lost so it turned out alright although they surprised us as we were coming up the hill with the instructions.”

Julia Kirkham and Ed Charlesworth, Austin Healey 3000 Mk 111, 20th. Julia, “I drove today and really enjoyed it, I really was having fun although we were conscious of trying to come in at the right time.”  Ed; “Julia has only driven the car for around half an hour in the UK, I was trying to read the speed tables and then she was getting the Healey into power slides! We need a bit more practice on the tests, Julia has a novel idea of setting up a test on the dinner table using a rubber as the car and the salt and pepper pots as cones to practice!”

Peter and Louise Morton, Porsche 912, 16th; Peter, “ This is our first ever rally! The first day went very well but it was just beginners luck as the second day we had a shocker, but wer’e learning a lot. Today we took a wrong turn but we are happy, it’s our first rally car the Porsche 912, everyone else seems to have 911’s but this is a great little car.”

Stephen and Collette Owens, Jaguar SS100, 14th, Stephen; “We made a mistake this morning costing 26 seconds but after that we had a really enjoyable day, we recovered well. The Jaguar handles really well on the loose. The week before this event I took my son to Norway for some ice driving which was a fabulous week, but driving on the gravel here is just like driving on ice. It can be quite slippy, especially if your trying to make up time and push on a bit, you start losing it under braking. Then accelerating out of the corner the back end starts to break away, the Jaguar can be quite loose at the back end.” 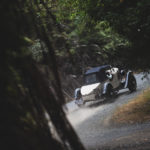 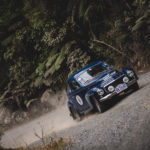 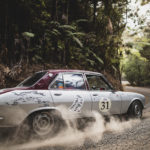 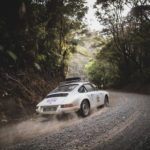 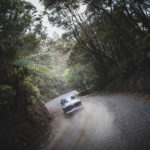 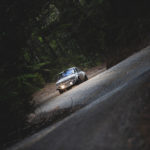