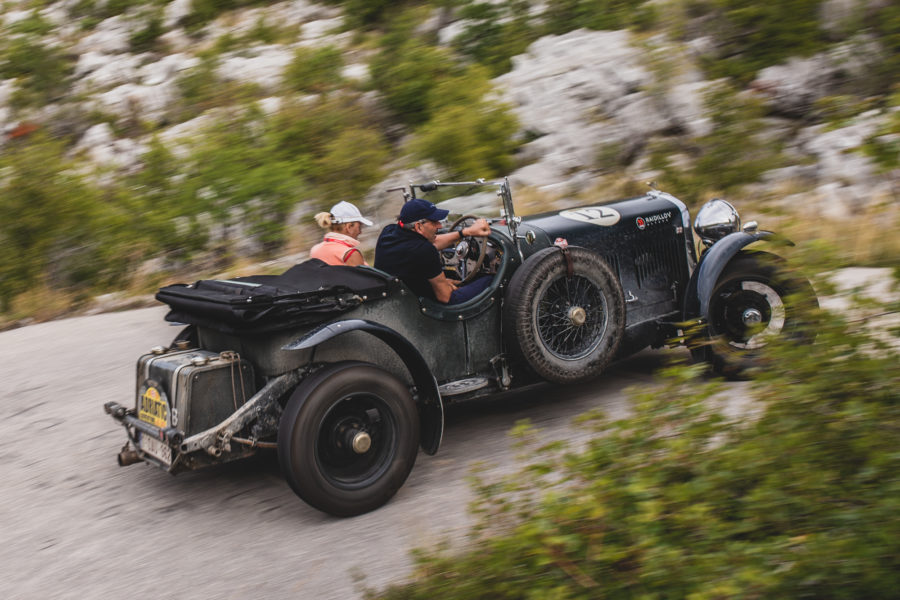 As seven Vintage Bentley’s enter the 2019 Le Jog Reliability Trial in celebration of 100 years of the marque, we are reminded of what founder W.O. Bentley said of his automobile; ‘a good car, a fast car, the best in it’s class.’

1919 Captain W.O. Bentley MBE was discharged from the army and immediately started to create the car he had been thinking about through the 1st World War. His experience designing aircraft engines and their need for power with endurance gave him great grounding. He was also influenced by engine designs of the 1913 Coupe de l’Automobile Peugeot and 1914 Grand Prix Mercedes.

1922 Bentley enters a 3 Litre at Indianapolis. Douglas Hawkes and riding mechanic H.S. ‘Bertie’ Browning finished 13th having completed the full 500 miles in avg speed of 74.95 mph. Team rush back to UK to win team award at the RAC Tourist Trophy.

1923 Adventurer John Duff enters first ever Le Mans race. W.O. Bentley wants nothing to do with it, says ‘its crazy.’ Duff very persuasive, W.O. reluctantly visits LM last minute. Duff and Bentley works driver Frank Clement finish 4.th Could have won but suffer two stone attacks on rough track, the second holes the petrol tank. Duff runs 4 miles back to pits. He despatches Clement on a bicycle with a cork bung and two churns of fuel, risking cycling against race traffic to reach stricken car. The car powers back to pits for repairs. W.O. is a convert and says they must return and do the race ‘properly’ next year.

1927 Le Mans, both leading Bentleys crash out at White House Corner. Works 3 Litre and new 4 ½ Litre collided trying to avoid a spinning car in nine car pile up. Sammy Davis was involved in the third older 3 Litre car, hit the pile up but survived in tact. Managed to keep going despite twisted chassis, bent front axle and damaged steering. With driving partner Dr D.J. Benjafield, pair managed to nurse ‘Old Number 7’ for 18 ½  hours to famous victory. In a toast proposed to ‘someone who should be present’ at the Savoy celebration dinner, battle scarred car made entrance. Hero car wheeled in as Guest of Honour.  Same replicated when Bentley won in 2003, 76 years later.

Three times Le Mans winner, Woolf Barnato, who bought Bentley in 1926, most famously raced the Blue Train from Cannes to Calais after a £200 wager on a yacht in Cannes. Punctures, fog and heavy rain delayed the Bentley, but he was so far ahead when he reached Calais, he carried on by ferry to Dover and drove hard up to London. He was back in his club in St James four minutes before the Blue Train arrived in Calais. He was driving his H.J. Mulliner bodied formal saloon not the Speed Six streamlined fastback ‘sportsman coupe’ bodied by Gurney Nutting. This car was named by Barnato in memory of the race but some paintings wrongly depicted the fastback racing the train.

Bentley Boys; Frank Clement, Frank Duff, Bertie Kensington-Muir, Dr D.J. Benjafield, Sammy Davis, George Duller, Woolf Baranto, Sir Henry ‘Tim’ Birkin, Commander Glen Kidston, were a breed apart. They were adventure seekers, many had been WW1 heroes who were still pushing the boundaries both on and off track for which they were famous. Most living the highlife in London, regularly breaking driving records or winning races at Brooklands.

Ex fighter pilot Sir Henry ‘Tim’ Birkin persuaded horse racing heiress Dorothy Paget to fund his programme of building a series of supercharged Bentleys. Dr Dudley Benjafield was a Harley Street specialist with a lucrative private practice and wealthy wife, he spent weekends on his motor boat and visiting Brooklands. Captain Woolf ‘Babe’ Bernato was a diamond magnate who was persuaded by W.O. to buy shares in Bentley and become Chairman. He won Le Mans three times being described as ‘a very fine racing driver indeed’, additionally a shrewd businessman. Despite the ‘Bentley Boys’ wild off track activities, including dare devil stunts and outrageous parties which the public loved to read about, when they went racing or record breaking they were professional and committed. They put themselves through hoops. They were happy to be regimented by WO, obeying team orders and endlessly practicing pit stops which were photographed for analysis.

Naval Lieutenant Commander Glen Kidston was as happy taking orders as giving them, as he was still serving. A submarine officer, he loved to shoot, box and race motorcycles with a record of dramas. He had been sunk aboard HMS Hogue in 1914 but managed to escape from his sunken sub and had to smash his way out of a wrecked aircraft on a flight to Paris. He was also the sole survivor of a Lufthansa air crash in England in which he received major burns. He died when the aircraft he was flying broke up over South Africa in 1931. Barnato said of him afterwards; “A resourceful and gallant driver, the most perfect host and a good talker and a better listener. The beau ideal of a sportsman”. Kidston was second at Le Mans with Jack Dunfee in 1929, winning with Barnato in 1930.

Sportsmanship, more than success and wealth was central to their friendly competitiveness. “There was real joy in the fact that one’s rivals were one’s friends.” Said journalist and racing driver Sammy Davis.

The Bentley Boys were a spirited, talented group of competitive drivers who helped create the legend that is Bentley.

2014 M-Sport Bentley Continental GT3 wins at Paul Ricard and Silverstone. The latter is first British win by a works Bentley since the Double Twelve at Brooklands in 1930.

Highlight of the 100 years celebrations as The Benjafield Racing Club arrange for an army of Vintage Bentleys to take over the roads of London, parade them along Brook Street before next day heading to Silverstone. The Benjafield 100 race for Vintage Bentleys at Silverstone with 40 cars on the grid honours tradition as drivers made a classic Le Mans start running to their cars from the other side of the track. Stirred up lots of emotion as did the action in the race, most of it side by side.

Goodwood Revival in September organised the Brooklands Trophy race for Bentleys in celebration of the Bentley Centenary, where cars had to start with hoods up and retract them at the pit stop. It proved a very exciting race won by Martin Overington who took the long route over the grass to pass a back marker at one point, but somehow kept control.

This car now owned by Bentley enthusiast and collector Jonathan Turner, this is the fourth of the ‘experimental’ Bentleys from the 20’s. It was one of the very first built by W.O., the first factory entry to Le Mans. It has been restored by Bentley guru and preparer William Metcalf, himself a twice ERA Flying Scotsman winner, twice Peking to Paris finisher, all in Bentleys.

1968 Former Winter Olympian Keith Schellenberg causes a stir when he enters his 1930 8 Litre Bentley into the London Sydney Marathon assisted by Norman Barclay and Patrick Lindsay. They fractured an oil pipe in Turkey followed by a slide down a bank then rolling twice into a river bed when Lindsay broke his shoulder. Delayed team but didn’t put them out. Finally retired when they missed a vital ferry crossing because they wanted to see the Taj Mahal by moonlight.

2012 James May tries to navigate Kris Meeke through the challenging Hafren Stage as part of the WRC Wales Rally GB for Top Gear. Duo are in a near standard Bentley Continental Sport GT apart from the front seats. Meeke is only 20 secs off the pace of the leaders, with no thanks to May’s pace note calling.

There are 7 Bentleys entered on the Peking to Paris Motor Trial. Bentleys entered include a 1958 S1 which was more at home outside the embassy on chauffeur duty than in the Gobi desert. Graham and Marina Goodwin win the Vintage Class in their 1925 Bentley Super Sports ‘Special’. Keith and Norah Ashworth are 3rd in their Bentley 4 ½ Litre Le Mans.

In September, 6 Bentleys line up for the start of the ERA Adriatic Adventure in Trieste. 3rd after a taxing ten days competition are Stephane Huynen and Marleen van Praag.

Le Jog 2019, no less than 7 Vintage Bentleys are entered for this harsh winter trial from Land’s End to John O’ Groats, 1400 mile the hard way. Acknowledged to be the toughest in Europe, this rally is witnessing an increased comeback by the vintage brigade over the last two years. All 7 Bentleys will line up in front of the Atlantic Ocean for a 100th celebratory photoshoot and interview session.