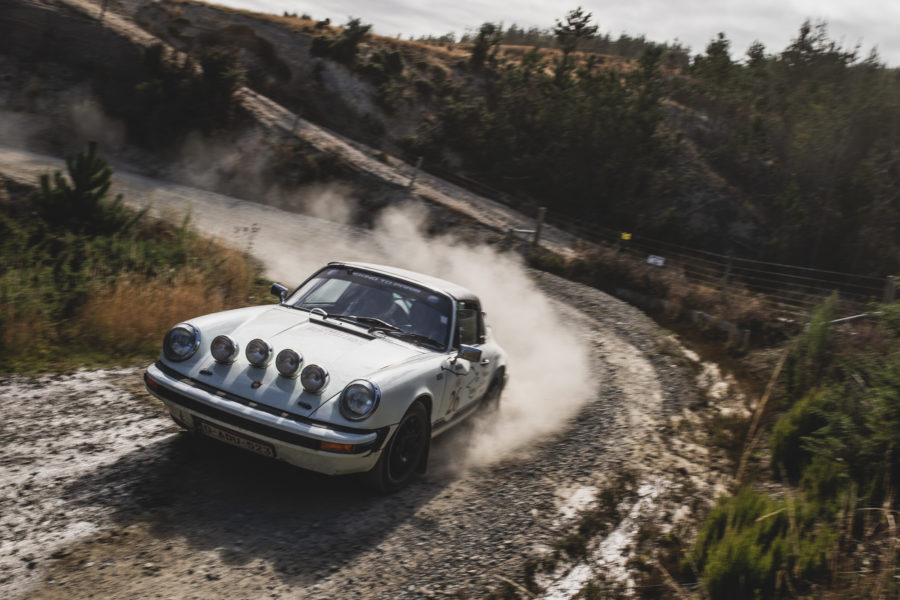 Calm after the storm

Despite traffic infringement, Hwaidak and Harashchenko still in the 911 fight for win

Last night’s rain storm in Hokitika whose howling wind bent the palm trees and kept some competitors awake, blew it’self out by morning making way for a clear blue sky.

With such early morning clarity the road was distinct along the Londonderry Dock regularity, but in the road book it clearly was not for some. A little left off the tarmac onto a rough downhill road caught a few crews out serving as a ‘wake up call.’ Whilst Martin and Olivia Hunt seemed to make a late turn in their Bentley, Ed Charlesworth and Julia Kirkham went past and into a quick reverse in the Austin Healey.

Sally Woof who has been performing so well the navigators role in the TR4 alongside husband Nigel went flying past. Sally didn’t realise the error for a while before charging back down the road to find the turn. Louise Morton did the same to husband and driver of the BMW 2002 Ti Peter, the crew very aptly went sailing by.

It was interesting to watch the experts like Lorna and Mike Harrison confidently take the turn as did Sherif Hwaidak and Jack Harashchenko in the second place Porsche 911. Their rivals and rally leaders Ann Gillis and Filip Engelen also found the ‘slot’ left, but a bit further on as the road plunged downhill into two hairpins, Filip flew into a lurid slide behind a building on the loose stones scattered on top of the asphalt. 21 seconds separated the crews at the end of the day.

Sherif and Jack were lucky not to lose too much time after being caught out by an unmarked traffic police car in the following deserted village. Creeping a little over 20 kph past the limit whilst trying to work out how they did in the regularity, the police car flashed it’s lights and Sherif stopped. $NZ 230 later the crew were on their way and able to catch up the lost time. Sherif; “We apologised, he was a lovely man, a real gentleman who in turn apologised to us but said he had to fine us! Jack did try to warn other cars with arm gestures but that didn’t prevent a rumoured repeat by Bertrand and Charlotte Van Houtte in their Porsche 911!

More beautiful scenery lead teams around the edge of Lake Kaniere. About five kilometers before the second regularity called Lawyers Delight, the rally moved very slowly along a wide stretch of road as Saturday morning runners were pushing themselves hard up the hill towards them. As the cars came past the edge of a camp site it was clear from the row of racing bicycles and the competitors still swimming the lake course that this was a Triathlon!

Teams faced their own challenge on the Mt Tuhua Road further around the lake. The sinuous track consisted of lots of short and sharp bends over slippy gravel with limited visibility around the corners in what was now jungle! Although deserted, the road had to be treated with caution due to the eroded edges which were marked by regular little poles on the inside of the bends. Through the rare gaps in the dense foliage it was possible to see just how closely the track was hugging the lake. One section suddenly widened then just as quickly slimmed into a narrow bridge past a gushing waterfall.

Together with the battle for first place overall there is also a keen fight going on for the final podium position. This is being lead currently by the leaders of class 2, Lorna and Michael Harrison in their Volvo PV544. Closing in to within 20 seconds today are Adrian Hodgson and Mark Bramall in their Peugeot 504 Ti, this car is fourth overall, leading class 3. Mark; “ We had good day today, it wasn’t so good yesterday, but yes we are aiming for the podium, we are trying to get there. However, 20 seconds represents the two cones we knocked down on the race track a week ago!”

Sally Woof, navigator Triumph TR4, 17th O/A. Sally; “I know, I missed the turn, I will have to wear the cone of shame now.

“It was too much haste with my orange marker pen when I should have used my yellow pen which is used to highlight the turns! I had it marked up all wrong, I followed my instructions to a tee but they were the wrong instructions! It was a cheeky little turn none the less although it was such a pity as we had just got a lollypop on the previous day. I gave up working out how much time we had lost as by that point I had lost my sense of humour, and actually used some bad language! Nigel was fine about it though. Never mind, the scenery is breath taking, just stunning.”

The teams had earned their halt in a little town called Ross. A real throw back to the ‘Gold Rush’ era, some of the inhabitants appeared to be still in the garb of the period as they watched the rally cars from their semi reclined position under the old verandah roof.

The Bushman’s pub was a classic piece of old colonial architecture where you could easily imagine the prospectors spending their rewards on a wild night in town. This pub has become quite an attraction for both the tourists and locals, but as far as the rally teams were concerned, across the street was where it was at!

Steve Hardwick and Peter Gordon were deep inside a long local workshop full of old classics, this time bikes and cars. Steve walked up and down eyeing the row of classic BSA’s and Triumphs inside the old building remaking on the makes and asking some knowledgeable questions about the collection to the owner who just stared vacantly on as if he had had enough before he started! Out of nowhere a rider appeared on a Triumph Tiger pulling into the shop for attention, so any hope of information on the collection evaporated.

The rally then headed towards and past the Franz Josef Glacier for the final control of the day at Lake Matheson where the skyline is dominated by the Southern Alps. The peak of New Zealand’s highest mountain, Mount Cook, could not quite be seen as cloud hung over it’s head. Some who had hoped to take a helicopter ride to the peak were to be a little bit disappointed. But for the other stunning views of mountains and the mirror effect of the lake itself, this was just tranquil bliss.

Mark Appleton, Clerk of the Course described the view and what competitors can look forward to in the next few days. “We are beside Lake Matheson just outside the village of Fox Glacier looking at the main ridge up towards Mount Cook, New Zealand’s highest mountain. We can’t quite see the peak due to the cloud at the top but if you went around the corner you would see the actual Fox Glacier, we have already been past the Franz Josef Glacier this morning. This is one of the classic views of the Southern Alps.

“We have one more day of competition then a rest day. This will be followed by a trip to the spectacular Milford Sound although we have a regularity on the way in the morning. The cars will be left in a secure compound over night with a security guard, then everyone will jump on a coach which will take them through the road closures of the area following the devasting flooding.

Teams can expect a really special experience as we embark on an overnight cruise through Milton Sound. The fjord views, the scenery and the landscape are just spectacular. It is just as Captain Cook would have seen it when he first made his voyage of discovery down here, it is totally untouched. The teams will see huge waterfalls dropping for hundreds of meters down sheer rock faces, wildlife and incredible waterways.”

Tim Eades and Jim McLaren, Ford Escort Mexico, 12th O/A; Tim “ We are seeing outstanding scenery, meeting wonderful people, enjoying great food, but the roads are to die for!” Jim “Yes, literally! We are getting into the Southern Alps along the west coast up from the sea, we are near the two big glaciers, we have been past the Franz Josef and are close to Fox Glacier. One day after the other is more spectacular, every turn there is something different. In fact every turn with Tim gets better on the road!” Tim;” 15 days into the event and the screaming inside the car has gotten much less! The roads are incredible, even the asphalt roads are great to drive, you can really feel the G forces as you push on. For both of us in summary, New Zealand is everything we thought it was going to be and more!”

Bill and Olivia Holroyd’ Bentley 4 ½ Litre, 18th O/A, 3rd in vintage class. Bill; “ We had quite a close one this morning!” Olivia;” On the last part of the second regularity, the surface suddenly changed from tarmac into loose gravel, we had a big slide, the car very nearly spun all the way round.”

Bill; “You said I was awesome or did you say awful?” The father and daughter pairing walked around the beautiful Lake Matheson after their escapade this morning and then made their way to a helicopter pad to see if their trip was still happening given the cloud around the summit of Mount Cook.

The adventure in New Zealand continues.