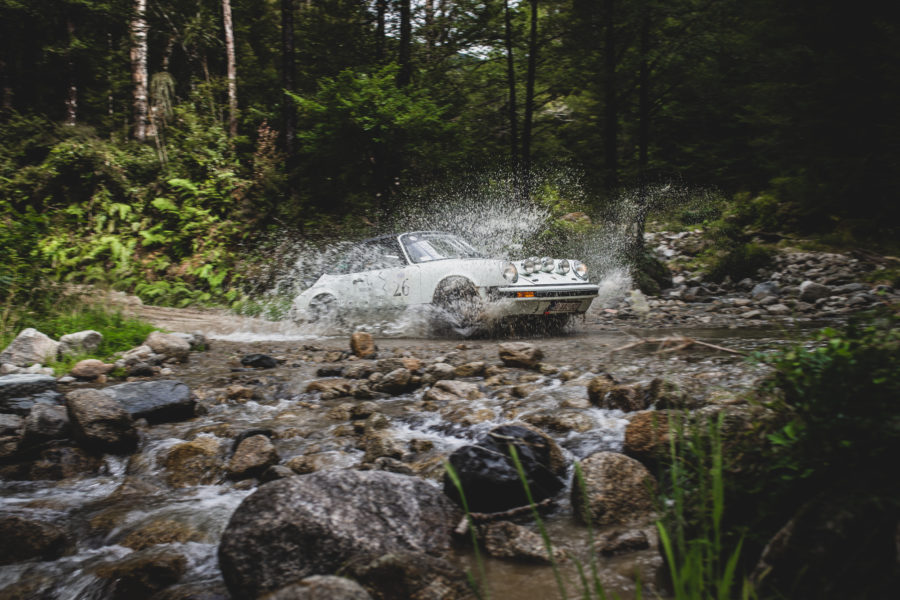 Dust, stones and grit over 3 regularities

Once out of the thermal pools capital of South Island, Hanmer Springs, it was a long but beautiful drive through dense forest lined roads with mountainous backdrops, to the first halt at Springs Junction.

Into the first regularity and immediately the cloud that had started to block out the sun was in turn obliterated by the huge plumes of dust the rally cars were spewing out along the 13 kms of the appropriately named Blackadder road. A minute between cars away from the self start board was just enough time for the dust to settle sufficiently for drivers to see where they were sliding and navigators to pick up their marks from their carefully highlighted roadbooks.

At the end of Blackadder, the information alongside the next instruction in the road book read: ‘Into Maruia Saddle Road. Note that this road offers an adventurous drive along a narrow winding road with some stretches of rough surface and stream crossings’. Clerk of the course Mark Appleton explained that the idea of this link road section following the regularity, was for crews to ‘take their time and enjoy it’. That they did, but some were saddle sore afterwards and some of the cars had definitely been ridden hard. The road was rocky and twisty with some acute hairpins, the surface was rough in parts but accuracy was required as gulleys and drops lined the narrow bumpy tracks waiting to snare cars that ran wide.

The thick lines of trees also helped form part of the edge of the track, ensuring that drivers kept as much of a respectful distance as possible in the narrow confines. It was quite a site watching Steve and Sam Hardwick coaxing the big 5.7 litre V8 Ford Falcon through the jagged course, sliding and braking downhill as they urged the Falcon into a sharp right hairpin. Sherif Hwaidak and Jack Harashchenko behind in their more deft Porsche 911 Carrera were still having to pick a path between the stones and boulders as they danced the sports car over the many stream crossings.

Teams were led neatly to the second regularity of the day, the Six Mile Walk. It was a total contrast to the link road, Maruia Saddle Sore, as it was wide, fast and flowing. If you could see it that is! As the choking dust from the previous car settled, this short but deceptively wide gravel road still required a big effort from crews to try and achieve the magic zeros on the clock at the timing points.

The third and final regularity of the day followed the lunch halt at Murchison. Braeburn contained four river crossings, some over narrow bridges in the one of the prettiest pine forests in South Island. The surface was a little more hard packed with loose stones on top but the dust was far less of an issue. The biggest issue was the insects!

Marshals Judith and Chrys Worboys donned full length clothing, facemasks, hats and insect nets over their heads as they prepared to man the timing point, said Chrys;” There’s wasps, bees and mosquitoes in here – we might see you later if there’s anything left of us!”

The crews soon learned that the approaches to river crossings were worn, on one there was quite a shelf before the flat of the concrete crossing. From a distance approaching at speed, it appeared the road was flat, it seemed tempting to rip through the water but caution between the ruts that emerged and smooth power through the water was the best option.

For brothers Brian and John Shields in their Ford Mustang there was no such care, they just skitted over the ruts and crashed across the edges of the concrete crossing. Smoke from the hot exhaust doused by water the only trace of their path.

Julia Kirkham and her brother Ed Charlesworth took great care on approach but still the low slung Austin Healey ploughed on a bit, twanging it’s sump guard as it hit the edge of the concrete water splash.

The prize for the best crossing goes to Martin and Olivia Hunt in their 1927 Bentley 4 ½ Lite Open Touring as the pair throttled the big lady back briefly, then gunned the big multi ton vintage car through the water, creating such a splash that there was scant water left to splash afterwards!

Teams visited the final time control at the incredible WOW museum in the city of Nelson, the rest halt of the rally on Thursday evening. The World of Wearable Art and Classic Museum even has a great range of motorcycles and cars on display, their own restoration garage was on open in case anyone needed any mechanical help. Adrian Hodgson and Mark Bramall did as they had broken the top strut mount on their fourth place Peugeot 504 Ti, but they opted to go into the city to seek a replacement. Martin and Olivia Hunt remained in the museum café to meet New Zealand friends who live near them in Sussex when the Kiwis come over to the UK for half of the year, their summers are spent in NZ! Martin and Olivia were kind enough to stay on even longer to be part of a photoshoot for the Nelson City newspaper as they lined up their Bentley for a shot in front of the museum before finally dashing to the overnight rest halt to begin their routine mechanical  maintenance on the Bentley.

Matthias and Thomas Bittner, Volvo 123 GT. 21st O/A, Matthias; “I went in the hot pools in Hanmer Springs, the sulphur part was excellent. However, today the dust wasn’t a big issue but the narrow saddle road was. Some people have a different level of fun, I won’t comment further on that except to say that it was rough. Although my car is OK over such conditions we do have weak bushes on the left which caused it to pull right under braking.

“I have found the South Island most impressive so far, it’s very different to the North Island, it’s wider it has more variance than the other side. It is greener and more fertile especially on this west coast. We enjoyed going over the Lewis Pass.”

Nicole and John Whitelock. Mercedes-Benz 280 SL, 13th O/A Nicole;” We got caught out a few times, once in a ditch, there were a few disappointments as always so it wasn’t a great day, but we enjoyed going through some of the tree lined tracks, they were great. The dust was an issue, John took his coat off at one point and shook it which produced quite a dust cloud!” How did John enjoy the final regularity with all the river crossings? “We slowed down for most of them, then we saw the photographers so we thought we’d give them a splash!”

Nigel and Sally Woof, Triumph TR4, 16th O/A; Nigel; ”We are having a great time! The saddle road was amazing, the TR was game on for that bit of road, although when you are driving a gravel plough   it does push the front end in. In fact we clear the surface at the front then Healeys drag their backs, so anyone coming after us gets a perfectly flat piece of road.

“Sally is on fire, doing a great job with the navigation, the TR4 is not on fire in fact that is probably the only thing that hasn’t happened to it yet. We have a clutch fluid leak probably with all the bashing it has had”. Sally;”We have been passing some incredible scenery but when you are head down on the time clocks and road books you can’t afford to lift your head, I just don’t get the benefit of those wonderful views.!” 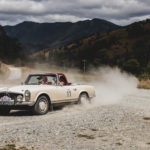 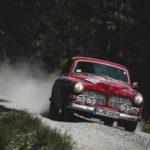 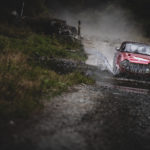 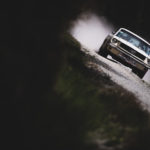 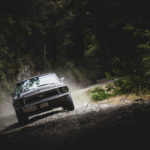 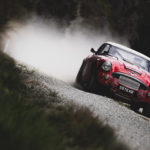