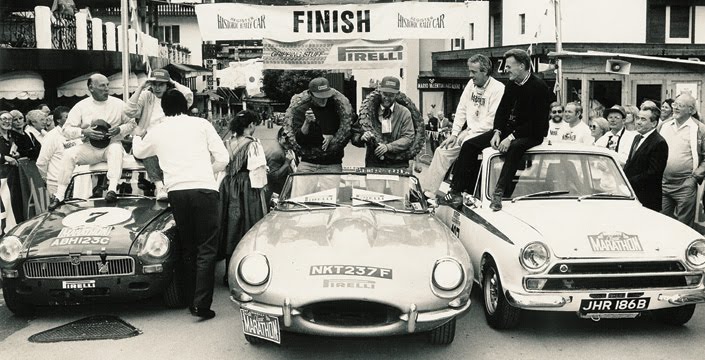 Yesterday marked the sixth anniversary of the loss of the founding father of the ERA, Philip Young. A giant of a man with lofty ambitions to match, he turned them into reality. He was also a huge character, responsible for bringing together legendary drivers and cars in challenges that had echoes of the past.

He really made the headlines through most of his herculean efforts either behind the wheel breaking records, or making events happen in outlandish places around the world. Adventurer, rallyist and organiser who could pull a rally off against the odds, he is still sadly missed by the historic rally community and much lamented in the world of true motor sport. Classic and historic rallying is where it is today because of him.

As a great example, the 1988 Pirelli Classic Marathon was filmed by the BBC, whose documentary, “The Great Chase” attracted a British TV audience of 6.2 million. Historic Rallying had arrived thanks to Philip’s vision, Pirelli’s support and the BBC’s rocket in the sky. Just about every major newspaper attended the launch and followed the event giving it great media coverage.

Former rally star Anne Hall took part in the first Classic Marathon driving a Ford Anglia, other stars were soon to follow. Sir Stirling Moss competed four times between 1989 and 1992 winning two Alpine Cups. Paddy Hopkirk drove several Classic Marathons in Mini Coopers, winning the 1990 edition with Alec Poole. Roger Clark drove anything he could get hold of, including a Mini Cooper, MGB, and a Lotus Cortina with Tony Mason. The Classic Marathon attracted many other stars from the past include Timo Makinen, Gijs Van Lennep, John Sprinzel, Willy Cave, Paul Easter, John Haugland, and former American rally champion Bobby Unser. After several years in the Alpes, the Classic Marathon ventured further afield and became the first rally to take classic cars into Africa with a drive to Marrakesh. The Classic Marathon continues to this day, now organised by HERO-ERA, the next Classic Marathon organised in true ERA tradition will be taking place this 4-9th July in Northern Spain and Portugal.

The Classic Marathon became the foundation stone for a worldwide scene… Japanese drivers came and drove it, to go home and after getting hooked …drivers from South Africa came and drove it. Three years after the first Pirelli Classic Marathon, the FIA sat down to draft a set of international regulations. The FIA’s Max Mosley invited Philip Young to meet him at the British Grand Prix at Silverstone – Historic Rallying was clearly now going to be worldwide.

Then there was the recreation of the first Peking to Paris Motor Challenge in 1997, 90 years since that first pioneering event caught the headlines around the world. The 8th edition starts in Peking next in May next year.