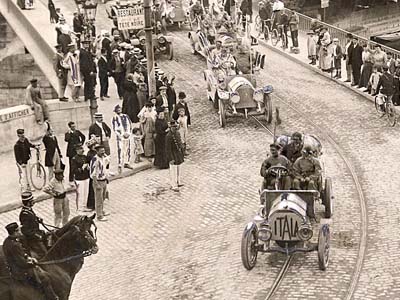 Peking to Paris: A Brief History

If you had happened to purchase a copy of the ‘Le Matin’ newspaper, on the 31st January 1907, whilst thumbing through the pages you might have come across an advertisement, that issued the challenge:

Of course, this was at a time when the world was a much bigger place than it is today and the automobile was very much in its infancy, despite this there were over forty initial entries into the race. The final entry was much smaller however, and on June 10th of that year, five brave crews lined up outside the French embassy in Peking and began a 9,317 mile (14,994 km) adventure across the world’s largest landmass, to the eventual finish in Paris, where the winners flag was taken by Prince Scipione Borghese two months later on the 10th August. Borghese had driven a 7.0 L Itala, with co-driver Ettore Guizzardi, which amongst other trials and tribulations had ended up upside down after falling through a bridge. The other entries to the race consisted of:

There were no rules in the original race, only that the winner would be the first to reach Paris, where they would be awarded with a Magnum of Mumm champagne. Scant reward for the risks that would be taken, as the route would take them into unmapped terrain with very few roads, and across deserts and wildernesses with no support crews, other than Camels that would carry fuel and set up station along various parts of the route. A journalist accompanied each team, and the route loosely followed the telegraph lines that stretched across the caravan routes of Asia, to allow stories of their escapades to reach the western press. Whilst all the teams struggled, the race would almost cost the crew of Pons and Foucauld their lives, after their Contal was overcome by the sands of the Gobi Desert, out of fuel, sands that still hold it captive. Its pilots were abandoned by the other runners in the event and had to walk back to Peking, with little to no water.

That original running of the event occurred at a time of many great races, and just like a great many of the early road races, the Peking to Paris was never to be run again. That was until 1990, when, in tandem with the downfall of the Soviet Union and the opening of borders, the modern incarnation of this incredible challenge could be run under the banner of the Jules Verne Society, although this time it ran from London to Peking. Since then a further 6 events have taken place, in 1997, 2007, 2010, 2013, 2016 and the last running in 2019, all of which have ran under the banner of the Endurance Rally Association, all up to 2016 with the infamous Philip Young proudly at the head.

In the modern era there have been various records set, an incredible amount of entries and many different class and overall winners, including three-time champion Gerry Crown, who at 87 has the same verve and enthusiasm for the adventure and maintains he will be entered again in 2022. The route that the rally has taken has differed over the years, but each event has been run in the same adventurous spirit of the first, one of the ultimate tests of human and machine in the very best tradition of the original challenge issued in Le Matin. The 2022 event will add to this rich history, as well as maintaining the legacy of the genius of Philip Young. Could it be the best ever? That will be HERO ERA’s own challenge.

The 2022 Peking to Paris Motor Challenge should prove to be a captivating, inspiring and exciting adventure. Media requiring information, or to ask about the use of materials for features and coverage please contact HERO ERA Communications Director, Tony Jardine:
E-mail: [email protected]