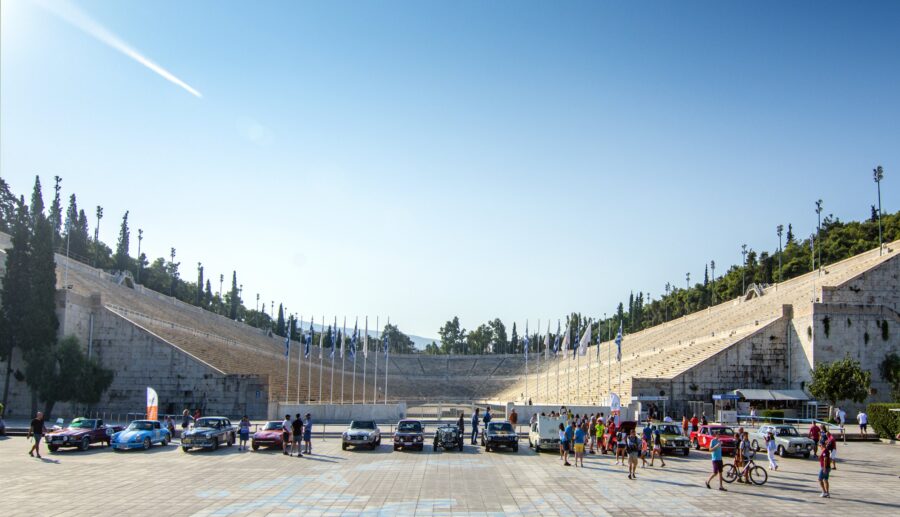 Mustang Gallops to the Top in Temple

Benno Britschgi laughs as he declares that many people think that Ford Mustangs are ill-suited to rallying. “Nobody takes this car seriously,” said Benno, a youthful 70. “Everybody thinks they are trash, too heavy, way too wide for this kind of thing but you just have to let it run.”

His rivals might just take it a lot more seriously after he let the muscular Mustang out to gallop as he and his daughter Nina claimed top spot in the overall results after day one of the HERO-ERA Temple Rally.

The growling machine and the Swiss crew excelled as soaring temperatures, city traffic and the demands of three regularities and a test took their toll on the first day of the 2500 mile adventure from Athens to Rome. He will certainly have given extra incentive to two other Mustangs in the field but it is very tight at the top with three cars within three seconds of each other.

Polish crew Tomas Dzitko and Beata Siwek are second in their MGB GT with GB crew Peter and Louise Morton’s BMW 2002 third. As the cars and crews arrived at their hotel in the beautiful coastal city of Nafplio after a day’s driving, the verdict was this is going to be a breath-taking and closley contested event.

“Size does matter on the regularities,”said Benno. It’s a 6.4 litres, 390 GT, and it works, especially going uphill because guys with small engines can’t get up with the speed required, particularly in pre-war cars.

“We had a good day, a fine test and my daughter said t lunch that we were second then so we were well placed. We’re here to have fun, we don’t take it serious but we want to do well.”

Hardly surprising when he then mentions that they were fourth overall in last year’s HERO-ERA Classic Marathon. They are serious challengers for the run to Rome.

Like others, they found the run through the morning traffic in Athens as tough as anything thrown at them by HERO-ERA.

When Aston Martin car 1 nosed past a ceremonial guard and out onto the packed streets of Athens’s early traffic on day one, the temperature was already close to 30C and the crews knew that the heat was on in all ways. By the time they pulled to a halt at Epidavros after 200 miles, the thermometer had reached 36C en route and the crews were hoping that the Unesco World Heritage site, lived up to its reputation for healing qualities. They finished the journey not far from the ancient theatre in Nafplio but the adventures of reaching the coast had proved less than straight forward.

The HERO-ERA long distance event was always going to be one of the most scenic on the calendar but it is already proving that natural beauty has a bite.

The overwhelming feeling was one of delight at arriving at the first overnight halt on the 13 days event from Athens to Rome with the consensus that the views of the Ionian and Aegean seas were too spectacular to stop navigators looking up from their notes. But there was a price to be paid and before the cars had stopped to look at the magnificent Corinth Canal just after lunch, the field was already two cars down.

First the beautiful Bentley Speed 8 from 1949, which had been running well in the morning came to a halt when problems started with the differential and soon the car was stopped. That ended the day for Belgian crew Yves Faymonville and Kerstin Schmitt who returned to Athens but they will be back in the rally. Replacement parts are being flown in from Brussels which should see the car cruising the Greek roads again before too long.

For Steven Young and Deborah Woollard there was a different drama after a fine start. Deborah began to overheat as the temperature soared in their 1972 Datsun 240Z. Even as she started to feel unwell, she kept the instructions flowing to Steve. In an effort to cool down, she stopped the car and did what so many wanted to do as they passed along the coastal roads and went for a dip. It did not help as heat exhaustion kicked in and they needed some medical assistance to reach the lunch stop where she began to recover.

“I didn’t want to stop but it became too much,”said Deborah. “I think the temperature in the car was at least 40C.”

The HERO-ERA back up team swung into action the two doctors assigned to the event were quickly on the scene.

“I’m feeling not bad now,”said Deborah as she joined in the first day dinner at the hotel,”but we are going to follow the rally for the next couple of days to allow me to fully recover.

“It’s a shame as we were going pretty well and I feel sorry for Steve but we hope to be back soon.”

It is a wise decision for most of the cars involved are from an age when air conditioning was a dream and tomorrow conditions are expected to be similar for a longer run of 227 miles. Two other cars had problems and were worked on by the HERO-ERA team of mechanics, the Porsche 911 which had spark plug problems and the Volvo Amazon 122 which had a small water leak and they will run again.

The 1965 Volvo, which makes the journey from the Isle of Lewis to the event, was involved in another small problem – a navigator’s nightmare.

“I turned two pages instead of one and we tried to do Regularity 2 while looking at the notes for Regularity 3,”said Claudine Bloom, who is guiding Andy Twort.

“It didn’t fit of course and we didn’t do very well but we were much better on 3 – I knew it quite well by then,”she added with a smile.

Day 1 saw three reliability sections and a test but most of the crews felt that escaping Athens was tougher. The rally had been given special permission by the Athens Olympic Committee for a glorious start from the precincts of the Panathenaic Stadium, a magnificent marble structure which housed the first modern Olympic Games in 1896. Associates of HERO-ERA, PHILPA (Friends of Classic Cars), the historic car club of Greece, were on hand. Close to the Acropolis which looks down on the stadium, the cars quickly diverted the many tourists who visit the stadium.

Nigel Dowding and Mary Antcliff were first away in their 1934 Aston Martin and by day’s end they were  pleased to be in 9th position, just ahead of Martin Beck and his 21 year-old son Joe, in their first rally.

“Our biggest achievement of the day was reaching the end,”said Joe, a Manchester University student.

“The regularities were short but there was some great scenery coming down the mountain roads. We missed the first cone in the test, that was a tricky one, but it was just a bit of communication which we will get better at.”

“I like a challenge and the regularities were definitely that with lovely tight bends.  They certainly kept me awake, it was not boring. I loved it, for me I enjoy that so much.”

So much so that she and John were in fifth place when they sat down to dinner.

The challenge will be even greater tomorrow with four regularities and a test on he Peloponnese on the way to Kalamata. The views promise to match the extra competitive edge by being even more outstanding. 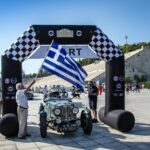 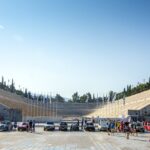 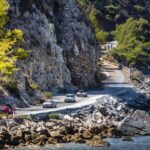 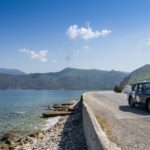 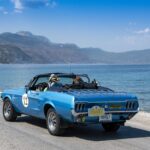 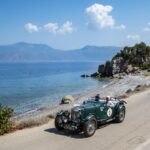 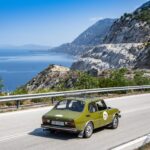 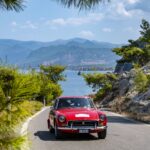