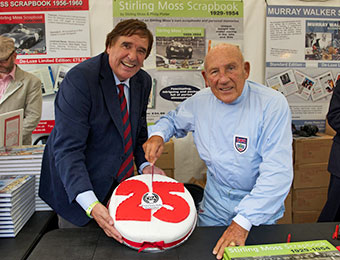 Historic Motorsport’s premier annual awards ceremony organised by Octane magazine, held this Thursday evening in the company of motor sport legends such as Sir Stirling Moss and multiple Le Mans winner Derek Bell, has seen the votes of the judges panel award a major trophy in the direction of the Endurance Rally Association.

Philip Young scooped the Personal Achievement Award “for inventing historic rallying” – the trophy was collected from the stage by journalist Tony Dron, who was in at the very start when he drove alongside the likes of Moss, Makinen, Roger Clark, John Sprinzel, Anne Hall and other stars in the early years of the Pirelli Classic Marathon, which Philip had devised, the first-ever international rally for classic cars. The Octane magazine awards were presented in the company of over 200 from the world of historic motor-sport in a glittering function at London’s Renaissance Hotel.