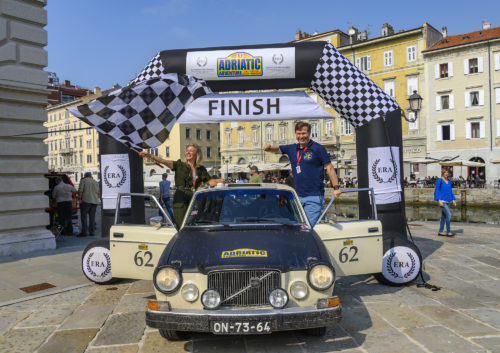 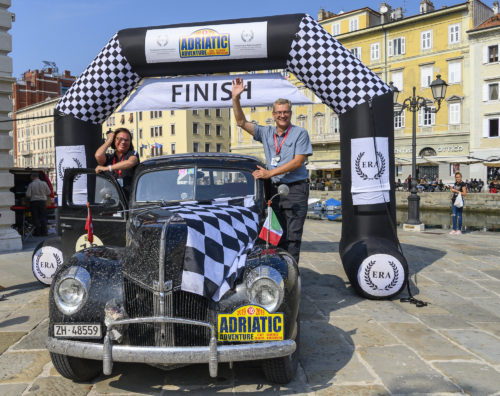 After 12 days, 3137 kms (1950 mls). 33 regularities, 55 timing points, four tests and ten border crossings, the Adriatic Adventure finished back where it started after a superb route through the Balkans providing a combination of keen competition, great motoring and supreme vistas.

Mark Appleton, who was Route Finder General and Clerk of the Course was congratulated by the competitors at the finish line in Trieste for providing such a great event, but was he happy with the event overall? “We have had such an amazing 12 days travelling around the Balkans. So many of us have been surprised by the scenery and the welcome that we have had along the route. The whole ERA team has pulled together to deliver this new event that we can be very proud of.”

The Portugese crew of Bruno and Carmo Rodrigues pretty much held the lead, maintaining a small cushion, from day four, but they were delighted to achieve their first win;  Bruno “We are both feeling amazing, I’m a very lucky guy to have such a great navigator as Carmo, this last day there was really big pressure on us to keep it calm and not lose time, we are so relieved to be here. We never expected to win such a big event, we are very happy and satisfied. My overall impression of the event now is this is the best one we have done, honestly after two weeks we all know each other very well they are so nice, all great mechanics, the marshals and the participants it’s just been great, in fact so nice we are already discussing our next ERA event.”

First in the Vintage Class was Manuel and Irene Dubs in their 1940 Ford Coupe. Consistently competitive with the car never missing a beat. Manuel; “ There have been some really hot bits but not today, the important thing today was to do nothing wrong. It is quite different to the Peking Paris, the roads are safer but has more regularities. it has been a long but great event, we were certainly tired each night. The Ford was running like clock work so that was a big help.”

2nd overall was the instantly recognizable and ever popular Ford Escort of Simon Spinks and Jim Grayson, who declared that they had enjoyed a good last day, and after asking the waiting photographers to take a photo of them and their supporters at the finish said, “well, you need the picture for the office wall don’t you! For us this has been a massive improvement on anything we have done before, so a couple of idiots from Yorkshire are finally learning!”

Taking third after a long event battle with the Volvo Amazon of Tim and Matt Wheatley were the crew of Florence Fontaine and Morgan Hector in the very popular Chevrolet Camaro. The big black beast had delighted all those on route with its somewhat terrifying looks and awesome noise, and after clawing back time over the past few days started this mornings competition tied with long time third position holders, the Wheatley’s in their Volvo 122S Amazon. Matt, “We were worried about the last regularity but it went as well as we hoped for, but the Camaro just overhauled us at the end, they were better than us, a great crew.”

With the father and son duo dropping out of third overall they became winners of Class 2, although it must have been somewhat bitter-sweet being so close to the overall top three. Graham Platts and Neil Ripley were second but only after a count back! They had finished tied with The Robertson’s TR3 after a quiet climb through the field in the last few days for the popular pairing, which prompted the organisiers go back to the first reg on the event to see who had least penalties and it was Graham Platts and Neil Ripley who just edged it in the Austin Healey 100M!

Another pairing making up margins for a great result were Bernd and Christiane Dannenmaier, who after achieving the lowest penalty times over the last two days managed to finish first in Class 4 and slot their beautiful Porsche 911s into the top ten overall. A wonderful result and a stirring reaction to earlier rally troubles.

Of course, these rallies aren’t all about the competition, as the old adage states it is very much about taking part and the welcoming atmosphere always encourages newcomers and the less experienced crews. Two such crews were the MGB of Tomasz Dzitko and Beata Siwek and the Land Rover Defender driving duo of Penelope and Stephen Gale, who had been granted special dispensation to compete in the Rover after their original entry had suffered problems, so as to allow them to at least gain experience for future competitions.

As for the MGB it was great to have a Polish crew out on their first full rally after a dummy run on the Flying Scotsman in a HERO Arrive Drive rally car earlier this year. Beata and Tomasz brought their first classic rally car on the event, an MGBGT which Tomasz bought in Holland. It handled well in the tests although Beata was in tears at the finish line. Was she eurphoric at finishing the Adriatic Adventure, her first big event? Beata:” Yes, but also unfortunately I am in some pain with a frozen shoulder from when Tomasz was throwing the car around at the test and I was trying to hang on.” Tomasz; “ She was really excellent, we are both very pleased to be here and to finish our first full time rally, it was quite an experience, we learned a lot and now will think about our next event.”

Anthony and Fiona Galliers-Pratt were deserving winners of Class 5 in their Porsche 911. Anthony was the first to get out of his car under the finish arch and congratulate Mark Appleton on such a great route. Fiona: ”It was brilliantly organized, the great route took us to some really interesting places we wouldn’t normally get to see, so yes overall tremendous.” Anthony; “There roads were fantastic, a few of the regularities you had to push on a bit. We had a little bit of a fuel feed issue on the last test but other than that the car was on fine form.”

Although Fiona did find the last regularity of the event a bit difficult. “Tricky yes, they’d changed the speed.” Anthony interjected; “ but Fiona picked up the sign and actually predicted exactly where it was going to be!”

Australians Michael and Anne Wilkinson were very pleased to make the finish in their Alvis Speed 20  SA,  Anne, “We aimed to cover all the route and get here so we are very happy indeed. It was a great day, wonderful scenery with some tricky regularities that created some doubt in my mind at one point, but yes we are very happy and thoroughly enjoyed the rally.”

One of the great vintage sights on the Adriatic Adventure was the Chevrolet Master 85 of Andrew Webster and Ian Robertson who really enjoyed the event. Andrew; “We’ve had a great day, a great event. Our aim was to get back to Trieste in one piece but we achieved a lot of our objectives. The car has been fantastic, I’m not sure about us sometimes, maybe we could have been a bit better, but what a driving pleasure! I would describe the event as first class. What I also liked was the route book, it just flowed.” Navigator Ian Robertson didn’t think the regularities were as difficult as rumoured; ”They were not tricky at all, what was tricky was the navigation at the end of the second regularity!  Andrew did very well, he has had a fantastic event, mine has been awful!”

The Mk 2 3.8 Jaguar of Swiss couple Rita and Christian Dillier crossed the finish line with the same enthusiasm they have applied to the whole event, and after a spirited photo session under the finishers arch in Trieste Rita said; “We are still together, no divorce but It was tougher than I thought but we think we are going to do it again!” Christian; “ Yes it was a great event, well organized, great fun but more challenging than I realised yet I really enjoyed the trials, the forests, the loose surface sections and the kart tracks. The whole event has just been great we are very happy. “

There was much more positive competitor reaction across all classes, and it is fair to say the event was a great success, with memories made and new friendships formed. As always thanks must go to the volunteers and the marshals, without whom these rallies could not take place. The final thing to say is thank you to all of the countries that we have travelled through and we all look forward to seeing you on another ERA event soon!