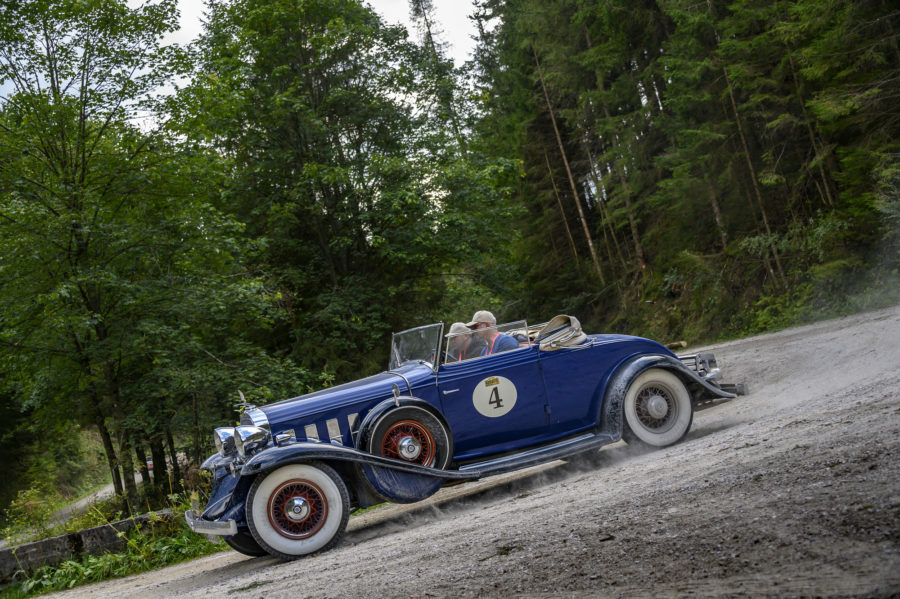 As the name of the mountains suggest, the Steiner Alps are close to the Austrian border, higher, steeper and very spectacular – especially when some of the regularities ran over winding tight gravel. Stephen and Samantha Hardwick emerged as overall leaders in their sweet sounding Alfa Romeo Giulia GT four seconds ahead of Monaco mathematician Graham Platt’s and Neil Ripley’s Austin Healey 100M which had also climbed the mountain and the leaderboard, despite a miscalculation!

Graham; “We made a big mistake this morning. You know I told you on the London Lisbon Rally that I was a mathematician, well ironically my navigator wrote down the speed table changes wrongly, we enjoyed a great regularity and came in on time, unfortunately it the was the wrong time. I think we are close to swopping roles!”

Leading the Vintage Class provisionally with sixth overall in their Bentley Mk V1 Special are Stephane Huynen and Marleen van Praag. Stephane was really enjoying the roads, explaining how the Bentley was performing as he waited in the open cockpit at an out control in the Slovenian sunshine.

“A fantastic experience so far, my chassis is shorter than the Super 8 Bentley so I can turn at once, we are good on the hairpins! Also my wife is a fantastic navigator which is why I am worried because it is all going too well, I am afraid something may happen. It is nice that there are other Bentleys on the rally, there is great camaraderie between us as we continue to have good contacts with them.”

Right behind them in seventh overall provisionally is the Swiss rumbly V8 Rover 3500 S of Lorenz Imhof and Adrian Bielser. Lorenz was pleased that his tyres worked so well on the many loose surfaces of the incredible regularities. “We have special tyres with big profiles so that helps. However, the first regularity of the day was very nice but then we were late on the second one, we were unsure about our clock against the rally clock and then we had a puncture! In the test we went wrong so we lost a lot of time.” A great result considering all for Lorenz and Adrian.

Considering they have been struggling with electrical problems, Michael and Anne Wilkinson’s Alvis Speed 20 SA is still lying fifth in the Vintage Class. Anne; “We are on our way to buy a new battery, we hope after that all will be fine. The test was good, the scenery amazing and the people so friendly- everything is great except for this problem with the power. The hairpins are challenging in the Alvis, there is a little bit of lurching, a little bit of holding on, but generally the car seems to be handling quite well.”

Sure enough Michael and Anne were seen really enjoying the Alvis’ handling over the sweeping bends of north Slovenia after a time control and stop at the Land of Hayracks. This internationally famous Gabrjels Hayrack at Dezeia Kozolcev, proved very popular when the ERA’s Peking to Paris event stopped there in 2016.

But it was the high regularities over the stunning Pohorje Mountains skirting around the mining town of Velenje which really put the competitors on their toes and hard on the brakes at times on the slippery gravel. The dust plumes hung in the hot air leaving traces of the previous cars for competitors to follow just in case they weren’t sure which way to go. Before the climb past the green ski slopes, one section under the trees, still damp and mixed with mud needed some caution for those trying to make up time. Regularity four was close to not running at all until ERA officials persuaded the foresters to stop logging, fresh timber at the side of the gravel tracks became an added hazard.

Another mover up the order following problems in their Aston Martin DB6 yesterday was Julian Reddyhough with navigator Adrian Pope. Last seen on regularity three, wagging the tail of the Aston as it bellowed it’s way around a hairpin creating a hug plume of dust, it climbed to 19th overall from near the back of the field yesterday. Said Julian; “ It’s working very well today, the problem is, of all the things we changed we don’t know what has made the difference, but it is as sweet as a nut today! We don’t know whether it was fuel or ignition but it had been running a bit rough and hesitating under load, eventually giving up altogether and it refused to restart. It feels like a different car today.”

Another enjoying his car in the conditions was Amin Hwaidak navigated by Jens Jarzombek in the wonderful vintage Cadillac 370B, although he was surprised by how well the American car was going on the tight windy roads in the mountains.

Amin said; “Excellent, I am very surprised, it is the first time I have driven it on a rally and it is going really well and up to now taking the punishment of some of the rougher roads, but in any case my navigator is also an excellent mechanic. It is a joy to drive such a wonderful car on such great roads although the hairpins are really hard work. I think I will have big arm muscles by the end of the rally!”

Albrecht and Christine Hasser are lying sixth in class on their first ERA event in the Balkans. Albrecht is already quite pleased with the event so far in his Jaguar Mk 1.

“After just one and a half days I have enjoyed all the regularities, the landscape is fine, it is our first Adriatic but the combination of transit roads and regularities is really good but I like the gravel as it is important how you drive on that surface, I am happy. This Jaguar has rallied all over the world but it is the first time for the car here”.

Anthony and Fiona Galliers-Pratt were really enjoying their Porsche 911 in the conditions, and it showed as they claimed a provisional tenth overall at the end of Day Two. Anthony; “ The regularities were good this morning although we had a slight problem when we met a truck going down the hill so we had to back up all the way up the hill again so our the timing was all wrong. This car is fantastic on the loose surface, I think it is perfect for this event but when you look at some of the older cars you wonder how they manage, but they are doing really well! The route has been fantastic, I must say it is a beautiful country almost undiscovered.”