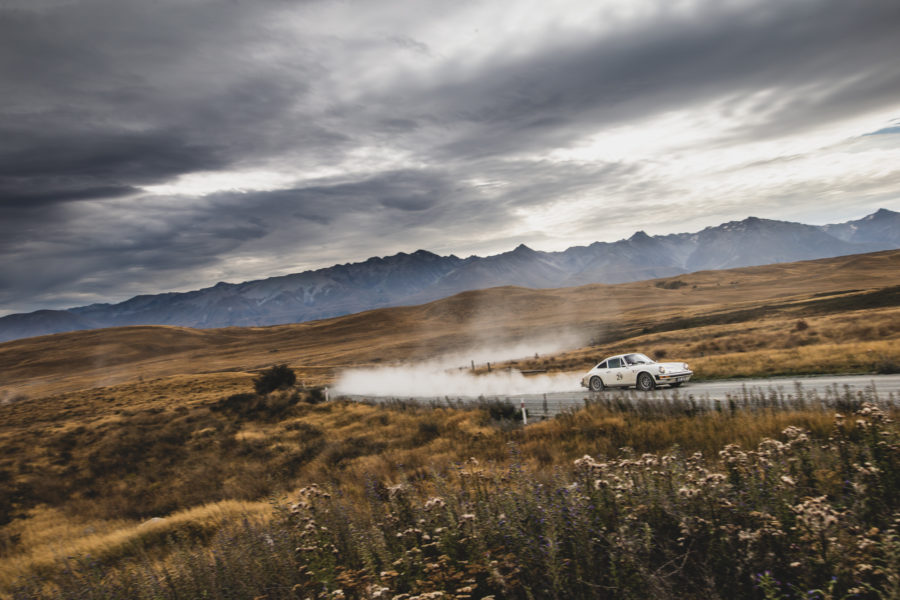 Dansey’s Pass and Mount Cook are highlights of the day

Despite a near sleepless night and feeling more nervous than ever before on this event, Ann Gillis managed to navigate husband Filip Engelen to an increased lead of 1m. 58 sec after five hard regularities today with two left on the final day.

Challengers Sherif Hwaidak and Jack Harashchenko in another Porsche 911 had a good day but not as good as the leaders as they slipped a further 20 seconds behind. Michael and Lorna Harrison had a stormer of a day to get within 2 seconds of fourth place Bertrand and Charlotte Van Houtte’s Porsche. Michael went out early yesterday in the Volvo in Dunedin to find a garage to weld up his damaged rear suspension and axle after the U bolt punched through losing them 2 minutes which dropped them to 5th overall. Chasing again, they are still leading the class 2.

Another team to star today were Nigel and Sally Woof in their Triumph TR4. They rose two places from 14th to 12th having overcome lots of issues with the car, they have been running new bushes on the suspension for the last four days. Not so fortunate but then lucky it didn’t happen at high speed, was the nut dropping off the end of Tim Eades and Jim Mclaren’s Ford Escort half shaft. They had no drive and parked the Ford, but the sweeps got them very quickly. Jim.” We were lucky, that nut just fell off but it holds the rear axle in place!” All this on the last regularity of the day, Tim and Jim dropping just one place.

The biggest stars of the day were the stunning landscapes. The road to the Mount Cox regularity with mirror views across Lake Pukaki to the snow capped Mount Cook were just jaw dropping. Prior to that Dansey’s pass which provided a tough, dusty track winding around steep gulleys and gorges. With the mountains as the huge backdrop, it was stunning in every way. Then the reality was the track in front of the crews was throwing up choking choking dust, it was difficult for visibility and there was some traffic on the narrow roads that had significant drops.

The first of five regularities of the day, the King Memorial Drive was a majestic piece of rising and falling sweeping tarmac. Competitors could see their rivals out across the valley as they navigated the ribbon of road behind them. The Bentleys could be heard echoing away with their thudding engines from a kilometer away. The second regularity was across moorland had been littered with what looked like stacks of monument style rocks, dragged into formation in the ice age and left standing upright some completely on their own. It was another of New Zealand’s great contrasts in the topography.

Otakar Chladek Jnr loved the tarmac section navigating his father’s Mercedes Benz 350 SL. “They were good regularities today but I especially liked the tarmac!”. Three zeros was a great score for the young navigator.

Olivia Hunt talked of the affect of the hard drive today in their Bentley 4 ½ litre Open Tourer; “Martin’s back has been aching, hauling the Bentley around those tight mountain tracks is hard work but I will get him a beer as soon as we get into the hotel and he will feel better.” Which Olivia did. Martin; “ It was quite strenuous, we covered 470 odd kilometers today and those tight gravel passes were hard work with a lot of dust which is still in my clothes and my hair. It was also a touch stressy at times as we did meet other traffic today. There were five cars, fortunately only one on the regularity. Olivia added; “Mount Cook was absolutely stunning, it really cheered me up after a difficult day when we were starting to feel a bit tired.”

Mark Bramall navigator of the third pace Peugeot 504 Ti for driver Adrian Hodgson could not believe the scenery. Mark; “It was so sensational there were times today when we were swearing at each other because of the scenery! We just saw Mount Cook and went Wow! I’m not so sure about that difficult Dansey’s Pass, well I am. It was horrible!”

Gris Gordon became the star of her car after she managed to reach three timing point on zeros in the standard MGB GT. Gris; “It’s only taken me 22 days to crack it and with a new Monet learning the variables of GPS, but yes we got a one and three zeros. I am hoping that my halo isn’t going to slip over the last two of the day!”

Ann Gillis; “I have managed to stay calm and keep my nerves under control until today. To be honest I had a very bad sleep, I woke at midnight and couldn’t get back to sleep, but as the day has gone on and we have built the confidence I feel a bit better.”

Ann and Filip must hold their nerve over two tricky regularities of the final day if they are to take that sweet victory on the New Zealand Classic Rally. 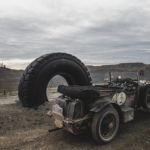 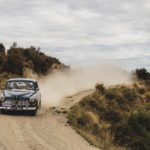 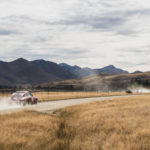 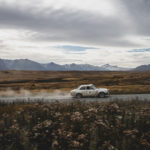 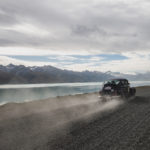 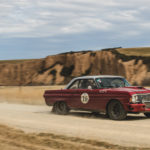