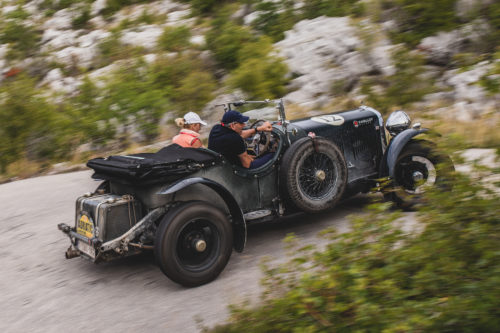 The number one crew in the starting order left Dubrovnik at 8.01am to head for the early regularity of the day after a well earned break the day before for all of the rally. Using a short cut to beat most of the traffic the cars climbed into the hills for quite an intricate regularity. It was fast in parts but the weather made the under tyre going a little bit tough.

This lead to the first of two borders to be hopped, most competitors were hoping for a trouble free time at the border and so it proved. In the very first Croation border post, the immigration officer was smiling and efficient, although we couldn’t see anyone at the Bosnian control as our passports quickly disappeared into a slot in the two way reflective glass.

The second simpler regularity was a mixture of surfaces, short and sharp would be the best description, but after that the coffee break was held in a renovated Inn, born out of the old railway station from 1903 and the Austro- Hungarian empire. It was here that we saw the Lancia Aurelia Americana Spider of Catherine d’ Andrimont-Janssens and Anne Rotthier the Belgian navigator, for the last time on this event. The rain was lashing down with some ferocity, and even the make shift umbrella Catherine had angled across her drivers door to keep out the driving rain wasn’t working.

Over night rain in the hills of Bosnia had turned even the link roads into treacherous skating rinks as the poor surface offered minimum grip. Add to that the old dust and tar brought to the surface by the rain and you have quite a slimy cocktail.

Catherine’s beautiful Lancia unfortunately slid into the rock face. Mercifully both Catherine and Anne were unharmed but the Lancia Aurelia is too badly damaged to continue in the Adriatic Adventure. Vincent Duhamel and Anne Charron were following Catherine in their Mustang GT350, Vincent commented; “there was a truck coming through but it was a bit in the wide side and Catherine had to correct her steering, but unfortunately it as she did the car slid into the rocks.”

The mechanical assistance teams who also arrived on the scene pointed out that there were lots of car parts strewn around the road meaning that this was a notorious bend.’

Amin Hwaidak is lying 10th in the Vintage Class in his Cadillac 370B with Jens Jarzombek navigating. Amin “it’s great in a straight line but in the tight corners it’s really hard work, I am getting big muscles in my arms. Today there were no problems, it is going well, I’ve had the car for three years now. This morning it was so slippy though, I thought there was something wrong with my tyres!  The plan is not to push on this rally over the last three days, but I’m going to push on the next one which is the New Zealand Classic. But before then there are a few mods to make before NZ, for example it has the original old brakes, we just need more effective and reliable brakes “.

Jim “Yes the roads were very slippy this morning, we had a bit of a situation with a truck pulling out and a car trying to stop. We have moved our brake bias more to the rear but it was OK, the surface has just been rolled and rolled and then the rain comes and you are sliding. Jim and Simon Spinks were asked if they are playing cat and mouse with the leaders Bruno and Carmo Rodrigues in the Volvo? Jim; “I wish we were! We made a big error early on in the rally and lost a minute, we think we would have done better if we’d written our own speed tables. You are always learning. We have done this now and today was better. We love this car it is superb, it is one It is an awesome bit of kit, one the original seven Ford Escorts built for 1970 World Cup Rally and we finished third in class on the Peking Paris in 2016.”

The leaders, Portuguese Bruno and Carmo Rodrigues are maintaining the gap to the Ford Escort. Bruno; “We are trying to keep a cushion but it is so competitive, there are three or four cars behind us pushing, doing really well. You know we could try to push a bit harder but then we will get lost. Carmo is an incredible navigator, so precise, so calm. But when I get in a bit of flap, Carmo threatens to throw the road book out of the window. That calms me down again!”

Tomasz; “We are driving this MGBGT which is doing fantastic, this car is beautiful but we are losing bits and pieces, picking them up and attaching them back further on. The mechanics on the technical assistance teams are fantastic, they take one look and know exactly what is wrong and how to fix it, they are magicians, I don’t know where we would be without them.  Bearta,; “We lost our trip so we went on our own intuition, we both worked together.” Tomasz;” she really is an incredible navigator, but we think that we should push to try for another cup, the Coastal Cup Award. You never know, we will try.”

The Mustang Coupe of John Yates and Joan Gee is lying 16th overall but Joan found the going a bit tough this morning “ the course was quite difficult, quite hairy. I was quite surprised, there were workmen in the roads in some places, we thought we were going the wrong way, you start to doubt yourself!

Joan was asked if finding fuel was an issue given how much the Mustang consumes? Actually no, we have found plenty of fuel stations to keep us running. But the other day we had just finished the regularity and everyone had gone, John said he thought we had run out of fuel. All we could do was roll it back down this hill where John spoke to a local who said there was a petrol station 10 kilometers from there. We literally rolled, coasted and cajoled the car for 9.7 kilometers. The gauge doesn’t show when it’s full, it’s a bit faulty, so now we are writing down all the fuel figures on a little pad.”

Tony and James Sowerby, father and son, are enjoying the event and their Ford Escort. Tony; Every day it makes more noises, then different sounds but it’s a great old car. James is doing a good job on his first event, so we are not doing badly. James is the youngest competitor on the Adriatic Adventure at 22, so did he take much persuading from Dad to compete? James;” from my point of view I can’t really complain too much, it’s an all expenses rally trip paid for by Dad. The only thing is I am missing the first week back at University, the Fresher Ball this week. It’s funny because I am in my fourth year, with all the new freshers I feel old, I come here and I feel young!”