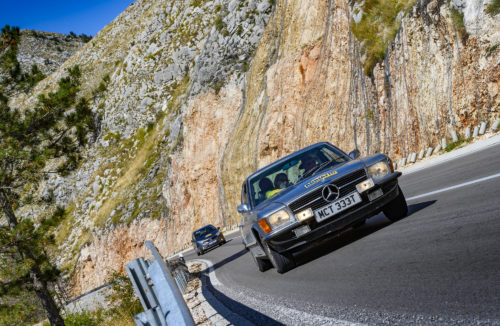 Competitors were given a free morning which came as a blessing to some who had time to fettle their cars or double check their equipment after the wet and slippy rigours of the second regularity and Piv Canyon the previous day. But before the run to Dubrovnik, which would include one short and a much longer regularity, there was a chance for crews to check out the sights of old Budva and it’s fortified port.

Thunder and lightening had struck during the night with rain belting hard against hotel windows waking many. Luckily the cars were all tucked away in the hotel underground car park otherwise a few vintage machines would have required a good baling out this morning. So with some relief, cars left in sunshine towards the UNESCO Natural and Culturo-Historical Region of Kotor about 25 kilometers up the road.

However, jams en route persuaded some crews to cut straight to the ultimate hill climb with sheer rock face, and multiple hairpins so tight and close they all blended into one another on the map. They were the wise ones as the climb to the first main control of the day was narrow and snakey for motor bikes never mind cars. However, classic and vintage rally cars ended up in major blockages as tourist busses amazingly ply the route scraping past the low narrow walls with Kotor Fjord seemingly miles below. One ERA media support vehicle had to reverse nearly half a kilometer to find space for a large bus to pass and only then by hugging the rock face and putting two wheels in a ditch could the bus pass the Toyota Hillux. Unfortunately a jagged piece of rock pierced and shattered not one, but two rear quarter windows in the ‘squeeze by’ operation.

On the first part of the climb, Catherine d’ Andrimont-Janssens and her navigator Anne Rotthier had stopped to take a few pictures. When they hopped back into the Lancia Aurelia Americana Spider, the battery was flat. Although official help was despatched, the first on the scene was a much smaller and more modern Italian car, the Fiat Panda 4×4 of father and son Humphrey and Mark Walters, what is more, the ever resourceful professional pilots had jump leads with them and got the ladies back in the rally very quickly. “No problem, all sorted” said son Mark as Humphrey explained why they were in a Panda and not their TR5. “The engine expired in a big way on day one in the Triumph so there was no way back in with that car. Unlike others who had arrived in hire cars to compete with special dispensation from the organisers as their rally cars had let them down at the last moment, we couldn’t hire a vehicle for cross border driving. So we flew to Geneva to pick up my son’s 4×4 Panda and rejoined the Adriatic Adventure. It looks like we were in time to provide at least a little bit of Italian assistance!”

Many competitors were now running perilously close to their Day 7 start time at the top of the climb but finally there was breakthrough. Only two more jams before the summit and most just scraped in to claim their official start time.

The regularities wound their way through some pretty deserted countryside, plunging between craggy rocks and then turning back on it’s self just as quickly, but both the Alvis of Rudi and Helga Friedrichs and the black Ford Coupe of Manuel and Irene Dubs looked smooth and fast. Equally they seemed quick to respond to speed changes as did the growling Aston Martin of Julian Reddyhough and Adrian Pope which sits in 11th place overall.

The battle for the lead of the Adriatic Adventure remains finely balanced as the small buffer of 68 seconds has remained constant give or take a few seconds over the last few days. It is almost as if Simon Spinks and James Grayson in the Telegraph Magazine Ford Escort are happy to continue to stalk their prey, or maybe leaders Bruno and Carmo Rodrigues are keeping just enough distance before they turn the screw in the last four days when rallying resumes on Thursday after it’s well earned day off to enjoy the sights of Dubrovnik where it has landed today.

Either way, the competition is tight. Timothy and Matthew Wheatley have taken back the final podium position in their Volvo 122S Amazon from Florence Fontaine and Morgan Hector, a real see saw fight as they swop positions on a daily basis.

Stephane Huynen has maintained the gap to Manuel and Irene Dubs’ Ford at the top of the Vintage Class in the Bentley, 50 seconds now their advantage following the excellent navigation of Marleen van Praag who admitted; “ I am a just little bit competitive,”