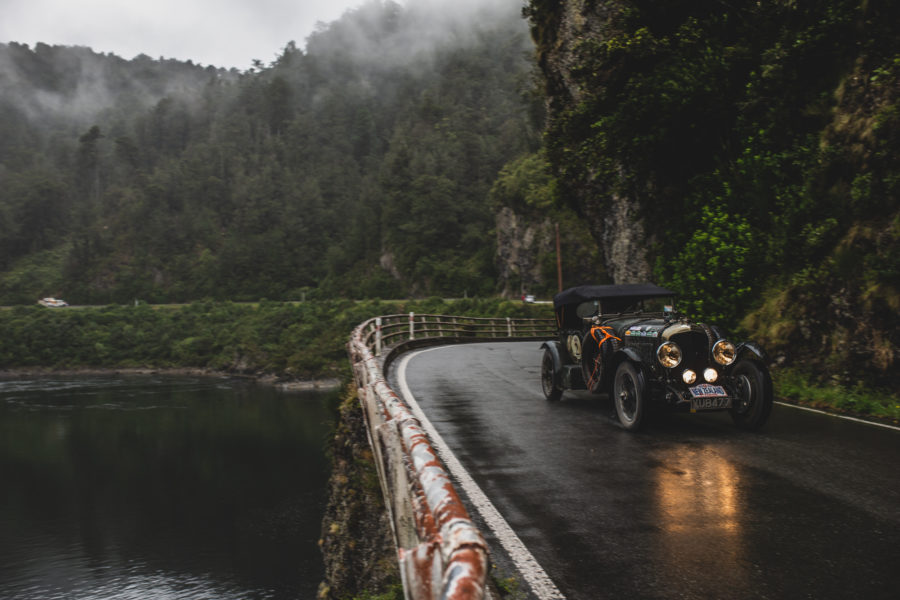 Rally car repairs and maintenance run into the night

Repairs and maintenance of tired rally cars took priority over eating or relaxation last night following some exacting regularities. Preparation was vital as the second longest day (by just 1 mile) lay in store, with an early start for the competitors today.

Adrian Hodgson and Mark Bramall had arrived at the WoW Museum in the city of Nelson with a front broken damper mounting last night. Shunning the offer of the restoration workshops at the museum, the duo took to the city to find the man with the Nelson City garage that some crews had met in a bar in Auckland before the event started! Once located, not only was the top strut mounting fixed but,” we have new tyres, fresh engine oil and filter, new diff oil and they welded up the exhaust. She has been going brilliantly today! Said Adrian.

“It’s a bit like the Peking to Paris where the local garages absolutely love having the rally cars in town and enjoy working on them. To them it’s so different trying to fix a rally car rather than servicing a Yaris! There was a great buzz, then some of them came up to the hotel later on for the Sweeps party in the car park,” Adrian said. Once the technical assistance crews (sweeps) have finished work for the evening it is traditional on the longer ERA events for competitors and staff to lay on a little car park party once during the event for the hard working ‘sweeps’ who keep the rally cars going with their ever present technical skill and help. The competitors were there in force, presents were given in bottle form.

Ed Charlesworth and Julia Kirkham were fortunate that a ramp inspection to fix the exhaust on their Austin Healey revealed much more!  Ed; “Luckily we were in just the right place for our snapped chassis to show it’self! We had got the car on the ramp at the WoW Museum Restoration Garage to sort the exhaust. I could see the look on Owen’s face, then I had a look to see the broken chassis at the rear holding the suspension. Talk about amazing fate to be there at the right time, the restoration mechanics got to work right away which allowed me another couple of hours to go around the incredible museum. They were great lads, we bought them some beers then took them to the sweeps party! They were fascinated by our rally route map, so we are hoping to organise them some copies of the New Zealand Classic Rally maps for their workshop wall.”

Bill Holroyd has finally had to resort to radweld to stop up his leaking radiator but importantly he managed to get four new tyres fitted last night to his Bentley 4 ½ Litre. A knock on recipient of Bills’ new tyre supply is fellow Bentley driver Martin Hunt who is still leading the vintage class. Martin; “Bill has let me have two of his used tyres which I will use to replace my knackered fronts. My own two new tyres will be fitted to the rears in a couple of days time.” Martin’s car looked like a long range ‘Desert Rat’ vehicle with tyres doubled up and strapped to the Bentley’s body just ahead of the doors.

The first two regularities of Day 14 were quite difficult. Dovedale climbed through pine trees in thick clinging dust where only the occasional shaft of light could make it through the tree canopy. The second, Hope Valley, was quite open to start with then became narrow and twisty punctuated by hairpins. As it was still hot and dry with no sign yet of the rain that was forecast, dust was still an issue. The outback postman’s 4×4 truck also looked like it could pose a problem but in reality it was the speediest vehicle on the dust track, pushing the odd letter into the little mail boxes before dashing the next homestead three kilometers or more away!

Time was built in after the first halt for teams to stop and try to walk across New Zealand’s longest rope bridge (swing bridge here in NZ), followed by a long run through stunning scenery of the Buller Gorge. This run under leaden skies provided the clue that the weather experts were going to be right as open rally cars pulled up their hoods and drivers with navigators in open sided vehicles donned their wet suits and rain hats.

On the west of the island, heading to the coast, the rain and wind started. Once the New Zealand Classic Rally caravan reached the road hugging the coast, everyone could witness the sea being whipped up into serious waves. Not unlike California’s Highway 1 in shape, you could almost hear the call: ’the surf’s up!’

The rain abated enough by the time teams stopped at the lunch halt, to visit the highlight of the day at Punakaiki and the incredible ‘Pancake Rocks.’ These ancient rocks really did look like layers of pancakes forged by the sea over billions of years. The sign at the site read; ‘Natures Pancake Recipe, the reason why some limestones are layered still has geologists guessing! It is generally agreed the layers are a result of a secondary process called stylobedding, alternate layers of hard limestone and soft mudstone mixed like a pancake’. Some wag had added ‘just add syrup’.

The final regularity which wound inland again around Lake Brunner was a corker, flowing over fast gravel with great views across the lake for anyone who wasn’t concentrating. A long straight and fast gravel road fed rally traffic back onto the coast road again and into a town that sounds as if it should have been an Abba song, Hokitika. With old buildings and history harking back to the ‘Gold Rush’ days, it was hard to make out any of it’s former glory through the driving rain and bent palm trees. Harder still to hope for the brochures ‘Sunset over the Tasman Sea’.

Stephen Owens, Jaguar SS 100, 17th O/A 2nd in vintage class; “We were prepared for the rain, hood up, wet gear on, but not prepared for just how slippy the roads were! The regularities were challenging but then we came here for a challenge didn’t we?”

Claudine Bloom, navigator Volvo 122, 9th O/A. Claudine; “The first regularity was very hairy and slippery, in fact it was quite scary in places. I know the last regularity was around a lake but I didn’t see much of it, my head was buried in the road books!” 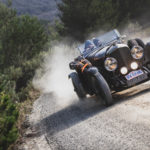 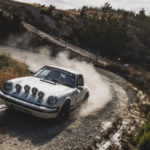 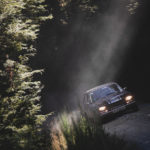 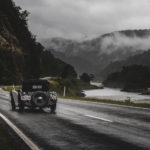 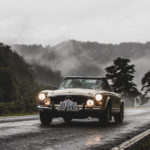 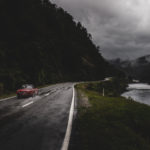