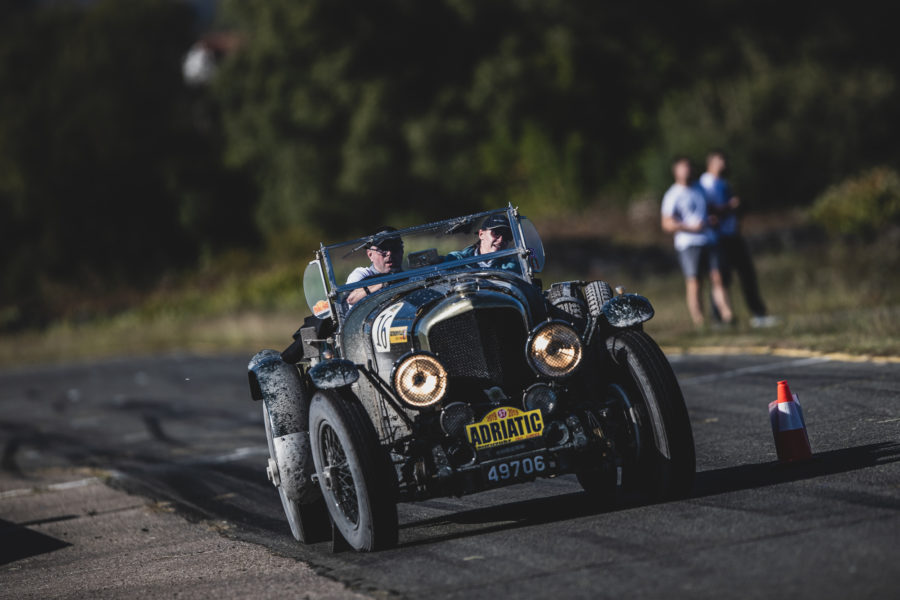 Bogey’s broken and crews moving up the order after long haul to Bosnia.

What started with an amazing zig zag hairpin regularity climb out of Zagreb, ended up at a test late in the afternoon in Bosnia where seven teams either beat or equalled the bogey time that had been tightened before being set! The results of two regularities at the end of the day witnessed five movers inside the top ten, but the Volvo team of Bruno and Carmo Rodrigues from Portugal are still leading the event overall by 42 seconds from new second place crew Simon Spinks and James Grayson in their Ford Escort who moved up from 10th today.

Also climbing back nicely after a ‘terrible day’ yesterday are Stephen and  Samantha Hardwick in their Alfa Romeo. Florence Fontaine and Morgan Hector moved up two places to seventh, their black Camaro SS causing quite a stir in the HQ hotel car park in Banja Vrucica at the end of the long haul from Croatia through Bosnia. Graham Platts and Neil Ripley lost time after going the wrong side of the cones in the test in their Austin Healey, but they weren’t alone. Fifteen other crews did the same thing and lost time for ‘wrong tests’.

Pipe smoking Swiss driver and character Manuel Dubs is on the Adriatic in his Ford Coupe, his first outing since the Peking Paris 2019. He and navigator Irene Dubs moved up to 11th today, second in the Vintage Class and closing in on Vintage leader Stephane Huynen and Marleen van Praag’s Bentley. Manual; “I very much enjoyed the Peking to Paris, my third time, and I’m already on the list for the P2P 2022! I had my pipe with me then and it’s here on the Adriatic event with me too. On Peking Paris we installed an expresso machine in the car, every morning in Mongolia I would give as many as I could a nice cup of coffee! This is a very different event but yesterday was good and also because it was my birthday! We ended up on the kart track with this very heavy car sliding from left to right and back again, I think I was always in control! Today was long but we made up some places.”

The long drive across Croatia was eased by some motorway travel but then came a really different drive across the flood plain surrounding the two rivers, Sava and Kupa. The ribbon of road along the edges skirts the very important ornithological wetlands of the Lonjsko National Park. It was great see the odd bird of prey swooping to find it’s prey.

Just as quickly, teams were asked to slow to a crawl by a very polite young lady in perfect English as she explained that it was the village of Kivaskov’s festival day. As the rally cars motored gently through at walking pace, they were treated to the sights of locals dressed in colourful traditional dress, some were fund raising at the fire station, a gymkana was in full flow and even a beer fest with concert about to start!

A more somber mood descended on the rally as it arrived at a timing point situated on the site of the Jasenovac Concentration Camp from WW2, sometimes referred to as the ‘Auschwitz of the Balkans’ where it an estimated 100,000 people died. As competitors walked past the eerie, rusty old engine and carriages that carried prisoners to the camp, most became silent but all agreed the Memorial erected to remember the dead, epitomized by the huge flower designed by Bogdan Bogdanovic, should remind generations to come that the horrors of such war have to be prevented.

Another wonderful car on the Adriatic Adventure is the 1955 Lancia Aurelia Americana Spider of Catherine Janssens navigated by the ever smiling Anne Rotthier on her first ever event. Catherine gave a little more detail on the most beautiful classic car on the event.

“I have had the car for twenty years, it was red at the beginning but I didn’t like that so I very quickly changed the colour. Since then I have competed in quite a lot of rallies in it, but it is fantastic, a very smooth and easy car to drive and I like it very much. There were two B24, one for America which this one is, hence the Americana title but it had a different windscreen and area behind the seats.

I love my Lancia actually that’s why on some of the rougher gravel I really feel bad for my car. I thought it was going t be a bit smoother, but she should be OK. Anne is OK too, she is learning fast although she does find the navigation a little stressful at times.”

Today proved a little bit stressful for the Lancia Aurelia it’self! At the end of the motorway section in Croatia, Catherine and Anne were stopped by the side of the road with broken spokes on one of their wire wheels. ”We think stones got inside the wheel and broke a lot of spokes as it revolved. I could feel it at the toll booth and then it became very wobbly but it could have collapsed in a bad place. It can’t be fixed but we have the spare on thanks to the wonderful assistance crews, we carry on!” Catherine and Anne were last seen gingerly picking a path through rutted gravel towards the end of the third regularity on their way to the end of an eventful day four.

Two local Bosnian TV news crews attended the test at the end of the day, but not content with that a third crew found their way to the HQ hotel at Banja Vrucica and sought out the youngest competitor on the event, 22 year old James Sowerby who is navigating his father Anthony. “It was OK, I was happy to talk to them!” said a smiling James.