A Day To Go and Crews Get Their Timings Right

They have been missing since Greece but just as unexpectedly as they appeared there, the cowbells were ringing out their warning as the big cattle reappeared in the Italian mountains lowing their greeting to provide a few more obstacles for the Temple Rally crews.

Not that they needed any for the challenge of the regularities was enough to keep drivers and navigators fully occupied even if the scenery demanded the attention. The day began from the mountain hotel near which the Italian version of Christ the Redeemer stands proud.

It took over an hour of driving through the mountains for the competitors to reach the first regularities which ran along a ridge with distant views of lush green national park.  The driving was excellent throughout and the scoring showed how much the crews have gelled since the start 12 days earlier in Greece.

The HERO-ERA Athens to Rome rally covers 2500 miles and the spirit of teamwork and togetherness is high. The next two regularities took the cars through differing high altitude terrain, one a fast flowing road, the other a beautiful run in the dappled-sun forests.  It was tricky with the swooping road, up and down, trying to hold to the speed demanded – but then entered the cows.

As in Greece, they wander freely and that includes the road through the trees. These horned beasts are among the few who are less than impressed by the classic cars. While Italians flash their lights on the road or applaud as the cars pass through villages, the cows were reluctant to move.  Many a car sounded horns only to be eclipsed by the clanging of the big bells the animals wear.  Ivan Pusnik, wound down the window of his 1973 Saab 99 to shout at the cows only for one to swish its tail through the aperture and catch him.  That brought a laugh from his co-driver, daughter Tisa but they went on well.

By the end of the day, back down at sea level near the Amalfi Coast, the results were impressive. Leaders Tomasz Dzitko and Beata Siwek were good as always, with only 14 seconds in penalties but they were upstaged on the day by their nearest rivals, second placed Benno Britschgi and daughter Nina who scored only 8 in their 1968 Ford Mustang while third placed Louise and Peter Morton scored only 13.

Dirk de Groen, from the USA, and wife Alexandra also outdid the leaders with only 13 in their BMW 2002 to slightly increase their seventh place lead from John Yates and Joan Gee from England in another Mustang which failed to start after one regularity and highlighted the spirit of the event when other crews climbed out and gave them a push start.

It was a day of consolidation for the top three who retained their positions with excellent navigation,  avoiding wrong turns. None of those three, however, will accept the final placings as how it will finish in Rome tomorrow.  “It is going to be a difficult day,”says Louise Morton. “We have loved this rally and we worked well together today but I know there will be demands in the final day such as 12 speed changes in the final regularity. It’s part of the fun but we don’t want any mistakes now.”

Certainly, Polish duo Tomasz and Beata refuse to count their chickens, or cows if seen again tomorrow.  “We had a good day, no real problems although I needed to concentrate hard on the driving while taking care of the car.”

The Poles prefer not to name their MGB GT but a man who does is remarkable Andy Twort and co-driver and partner Claudine Bloom who drive Amy, a 1965 Volvo Amazon.  A long distance rally is nothing for them …..they live in the Isle of Lewis, take a 2 and a half four ferry to the mainland then a 16 hour drive south when going on an event like the Temple.

Sitting in 13th place, Andy is relaxed with not being a front runner, but is always competitive.  He and Claudine love a challenge and did the HERO-ERA Le Jog, Lands End to John o’Groats, to start their rallying life. They have rallied since then all over the world and did the Peking to Paris rally in Amy after rescuing her from a Welsh barn.

“We wanted a car we would be able to weld back together again. We hunted everywhere and finally got Amy and drove her home to Lewis having paid £3000 on New Year’s eve 2014 while everyone else was celebrating.

“I rebuilt the car at home.  I’m an aircraft engineer so I’ve been on the tools all my life. I love the technical challenge. She’s a year younger than me – 65, and has a standard 1800 cc engine, body strengthened but otherwise standard wheels and tyres. Our air conditioning is the windows.

“We do the maintenance ourselves. Basically we wanted a car that would get us from A-Z in a rally and get the car back, too, in one piece and we wanted to do it without any help. We both know how things are done. There’s a video of Claudine changing a tyre – not a wheel – a tyre. Then we did loads of other long distance rallies because we love sitting in there and doing what we like.”

Amy has been all over the world, New Zealand, Europe, Iceland, Asia, China, and the only gap is the Americas but we might sort that one out fairly soon.She has a sister. Amelia, who did the HERO-ERA London to Lisbon event.

“With a car like this people come to see us.”says Andy.  “When you go abroad as a tourist you usually have to find the locals but they come to see us, that’s why she is covered in rally decals. She is a very heavy car and we just go our thing. We aim to get home, anything else is a bonus.  This rally has been another adventure for us.”

Tomorrow reaches the end but it will be no easy task to roll into Rome as the winner of this Temple Rally. 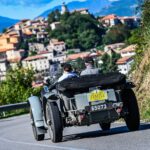 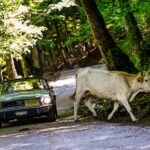 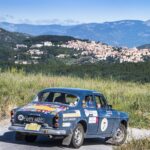 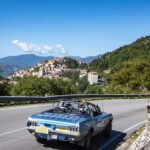 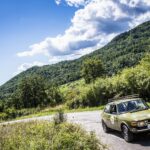 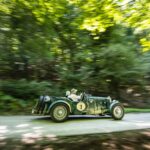