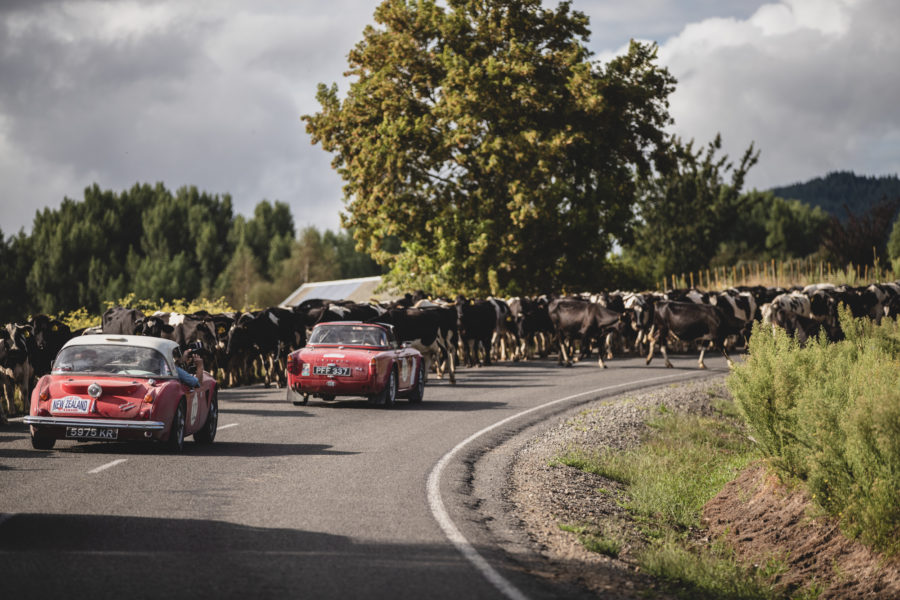 Leaving Gisborne sea front to head to Taupo, teams passed the proud statue of Captain James Cook who discovered New Zealand. The plaque underneath describes his responsibility for the meeting of the two peoples that forged a great nation. The ten different nationalities on the New Zealand Classic Rally would attest to the great friendship and hospitality they have received from the wonderful people of this country so far.

Rally cars climbed the escarpments to reach Paprikanapa and the first regularity of the day which proved to be a stunning course along the top of the ridge road with hills rolling away steeply to each side. The surface was a fine yet slippery gravel creating huge plumes of dust in the hot and very dry conditions. This 26 km challenging piece of road is regularly used in the classic stage rally, the Silver Fern NZ Rally which takes place every two years.

As crews crested another hill over the top of Kaikora, they all had to come to a sudden stop, but not the clocks that were ticking away at the next timing point. Teams estimated eight hundred sheep herded by riders on ponies had trapped their eight cars, gates closed across the road at both ends!

This was the first major flock of sheep seen by the rally in a country renowned for having a lot of them! This semi stampede of our woolly friends served to under line the briefing from the Clerk of the Course Mark Appleton when he said ‘you will be diving headlong into the New Zealand you have been waiting for, picturesque landscape characterized by volcanic mountains’ in short New Zealand’s equivalent of the Australian outback, more beautiful but remote and wild none the less, as the sheep herding pony riders demonstrated. After deliberation tonight the penalties have been scrubbed.

The second regularity of the day was almost a motorway in comparison to the ridge. 26 kms of Hereheretau beguiled with a wide flat gravel road lined by fences over the first five kilometers. For those too quick on the throttle the almost round, large ‘ball bearing’ gravel stones just rolled under the tyres whipping grip away. Navigators were also aware that the spinning wheels in some cases were affecting their trip meter readings.

The tracks soon narrowed and after the regularity the superb fast flowing tarmac roads turned into gravel again just as quickly, it was a real case of cut and shut. Then back to the tarmac again to escape the fine dust as the sun blazed overhead.

The landscape was indeed impressive yet definitely ‘Lonely Planet’, again remembering Mark Appleton’s words, ‘make sure you fill your tanks to the brim by Wairoa, it is a long way to the next fuel station’. More than 200 kms in fact, all part of the hardest day so far on the New Zealand Classic Rally, clearly designed to help competitors feel they have earned their rest day after the 420 km trek with competitive sections thrown in for good measure.

The ‘real’ New Zealand sparkled and shone as the third regularity of the day lured cars through lush vegetation around the edge of the stunning Lake Waikaremoana, Te Urewera Road. In fact so attractive that more than a dozen tourists were spotted during the course of the 30 kilometers! One couple in a motorhome, despite warnings about rally cars, decided to amble along a very narrow low walled section with a cliff face one side and the water on the other, stopping in the middle of the road oblivious to all around. Sherif Hwaidak stuck behind in his Porsche, politely tooted the motorhome which eventually lumbered out of the way. Sherif and Jack gave a frustrated wave as they passed, luckily their second place remained unaffected. Belgians Filip Engelen and Anne Gillis continue to lead the event after another great performance today in their Porsche 911 Targa, but they are just seven seconds ahead of the German crew. It is certainly turning into a battle of the 911’s at the moment.

The long haul via Murupara brought teams to the Bruce McLaren Motorsport Park Centre for two separate timed laps of the magnificent race circuit. A fitting tribute to New Zealand’s legendary F1 star, the original classic papaya orange colours adorned the signs and pit buildings. Bruce and team mate, New Zealander Denny Hulme, introduced the colour with a Kiwi emblem on the side of the McLaren M7A F1 cars in the 1968 season. The famous colour is still carried on the current 2020 Grand Prix McLarens which began testing with the other F1 teams in Barcleona on Wednesday in preparation for the 2020 season.

Thomas and Matthias Bitner, Volvo 123 GT, 21st O/A. Thomas explained why their day ended with the crew being towed to a petrol station after the race track test; “We had a little gas problem, we run a bit like F1, always on the limit but we were three kms short of fuel!”

Leigh Pullen and Donald Robart, Austin Healey 3000 Mk 111, 25th O/A. Leigh; “We were on the last regularity of the day, it was long but we were doing well, up with the pack, then the instinctive juices got going as we tried to catch up. Unfortunately we went off on an S curve and nose dived car 18 into a 4ft ditch.

“We are both OK although I am a little bit sore with a bruised rib.

“The sweeps pulled us out and then removed the wings so we could drive the car back but then the oil pressure went so we had to abandon the car. We hope it can be retrieved and fixed so we can rejoin the rally.”

Nigel and Sally Woof have also been off in a ditch today, although it was not as deep or damaging to their Triumph TR4.

Brian and John Shields, Ford Mustang, 20th O/A. Brian; “The problem was eventually traced to a twisted gearbox mount, the boys got the grinder out and tied it back in place” The Scottish brothers have been going well again over the last couple of days.

Amin Hwaidak and Jens Jarzombek, Ford Mustang, 8th O/A. Amin “We made a mistake on a regularity a few days ago, we took a wrong turn and ended up losing around 20 seconds, but we are really enjoying trying to catch up again.”

Steve and Sam Hardwick, Ford Falcon, 5th O/A. Steve; “We do have the new starter motor, it’s in the back of the car. They have a workshop at the Bruce McLaren Centre so we are hoping to get it fitted there later. We got stuck behind the sheep, in fact we were the first car and lost the most time, I started counting them but there were so many that I fell asleep.”

Sonja Verloop- Postmus and Anthony Verloop, Mercedes-Benz 280 SE 12th O/A; Sonja “There were probably 800 or so sheep, then the shepherds on horses with guard dogs guiding the sheep, we lost around three minutes but others had a much longer wait. It was really very nice to see though!”

Nichole and John Whitelock, Mercedes-Benz 280 SL 13th O/A Also got caught behind the sheep shepherding. Nicole “It was a pity as we had been on a zero up to that point! The good news is that I am feeling a little bit better today, my rib cage is improving day by day although John is still being very kind with his driving and not bouncing me around too much. We are always a little bit slower at the race track because there is so much of my luggage in the car!”

Peter and Gris Gordon, MGB GT, 22nd O/A. The crew whose 1935 Talbot broke it’s differential and then bought a classic MG locally so they could continue the rally. Peter; “Yes it looks very standard, there one or two rattles and it bottomed out briefly, but we have just got to be careful, I can’t throw it around. However, it is a revelation, a lot easier to drive than the Talbot!” Gris; “ When you are getting used to a new car it can be difficult, we had one scary moment on the first day with it being a new car, I don’t really like it when we are going around the corners.”

Sherif Hwaidak and Yevhan Harashchenko Porsche 911 Carrera, 2nd O/A Sherif; “This a track where the bigger cars can really stretch their legs, like my brother’s Mustang, or Stephen’s Falcon. We are happy to keep second and challenge but it has to be said, Jack (Yevhan), is doing a very, very good job.”

Jack, “OK, no mistakes but I am really enjoying sliding around, it was perfect but at times it is very slippy on the gravel, that’s why we are sometimes having problems with the trip meter when we get wheelspin.” Jack was also very quick to run to the edge of the motorway slip road the other day to direct the mechanical assistance crews to their stricken Porsche after it broke it’s fan belt. The belt was changed rapidly and the crew rejoined without penalty. 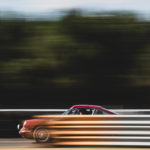 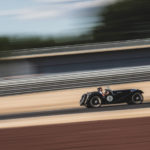 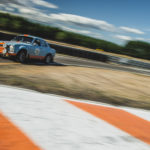 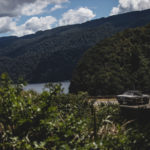 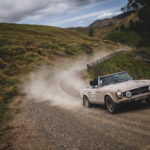 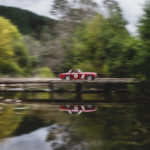