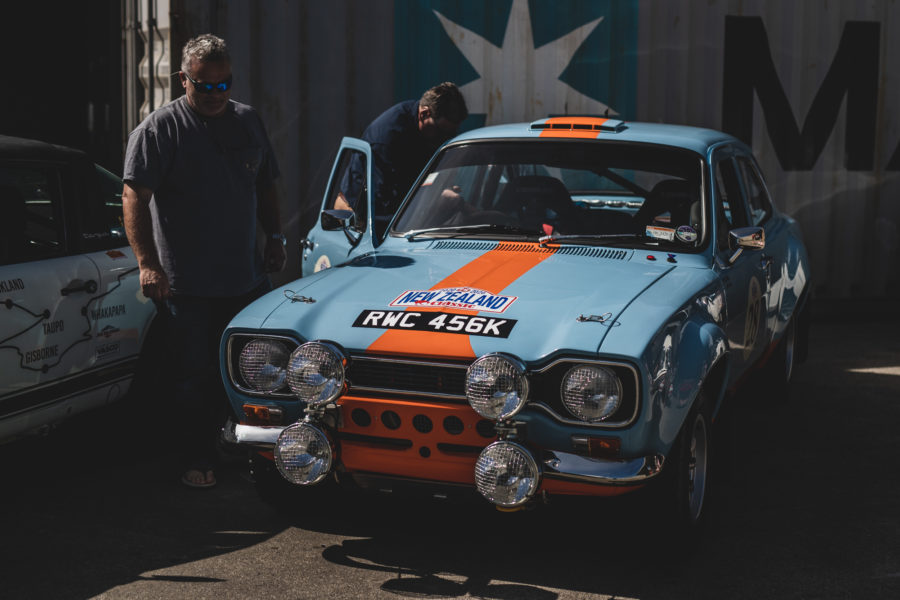 Cars and crews reunited in Auckland

28 distinctive vintage and classic rally cars arrived after a long journey from Europe, to be reunited with their owners in Auckland New Zealand. The crews then spent some time making preparations for technical scrutineering to be held at the ERA New Zealand Classic HQ at the Hotel Cordis on Friday 14th February.

All the cars looked immaculate, some sparkled in almost concours condition despite their long haul to the other side of the world. Teams were happy to be reunited with their precious cars, pleased that all seemed to have arrived in good shape. Well nearly!

Jeff Urbina (USA) 1972 Ford Escort. “Everything seems to be in order other than I pulled the steering wheel off when I got in the car! So we’ve got a new one on order that will hopefully get fixed tomorrow in time for the start.

“I Just bought the Escort, it was a former works car raced back in period and this will be our first rally with the car. We took the high powered BDA out and put in 2 litre Pinto engine just to make it more manageable. This will be my first rally in New Zealand, I’ve been here on business before but I am really looking forward to seeing the islands. I’ve brought my mate, New Zealander Chris Pike with me, we spent the last couple of days with his parents, so we got the prodigal son back home! I promised his Mother I would look after him and bring him home again.”

Chris Pike (NZ); “I’ve known Jeff for 12 ½ years and although I’m originally from NZ I’ve been living in the USA for 22 years and this will be my first rally in New Zealand! I left here in 1989, travelled the world and ended up working and living in the US. I met Jeff and his crew of guys, I used to race sail boats that was my original trade, now I am a builder and race cars with Jeff.

“This is my first time back home in 15 years, my Mother was glad to see me!”

Nick Sleep (GB) 1964 Mercedes Benz 230 SL Pagode; “ I did the ERA Peking to Paris in 2016 with my daughter Jess when she was 19, now she is 23 and our youngest daughter has gone off to university. The golden rule then was as everyone said, look after the car and it will look after you, we had a different one, look after each other as well as the car and that worked quite well! Now my wife and I are doing the first rally together of any distance, (having tried a couple 1 day events) and the golden rule now is no shouting! So now I’m in marketing mode, if she says I’m going too fast I’ll slow down, if she decides it’s coffee time we’ll stop. If she wants to bale and go to the hotel early, we will go. I am trying to set up 10 years of rallying here!  So if we are right at the back that’s why!”

Stephen Hardwick (GB) 1965 Ford Falcon; “ Everything is here although it’s a bit of a rush job that’s why I’m working on the car now. Unfortunately an HT lead failed when it was taken to a port in the UK so I brought some with me but they’re not the right ones. We have another day and a half before we start so I’ll try to find some and have a go at fixing them. I was a marine engineer about 30 years ago working on gas turbines, so I like to have a go.

“The New Zealand Classic attracted me to enter as it is for me and my wife. We wanted to come to New Zealand as I nearly emigrated here when I was about 11 or 12, so it was always in the back of my mind. My Grandfather lived here, in fact where we are making the first stop on Saturday is near where he lived. When he got back to the UK he didn’t stop singing the praises of this country. The same with a New Zealand lady who came to live with us for a year, she was going to come and see us here but sadly she is not very well at the moment. All three of our kids did their gap years here and they all said don’t judge NZ just on Auckland, wait until you get out there into the country it is very different. We are really looking forward to it.”

Sherif Hwaidak (Germany) Porsche 911 1976; “All is OK except for my back. I was lifting out the spare tyre this morning and I was afraid that my back might let go and that’s exactly what happened! I have had some medication so I am sure it will be OK. I am looking forward to driving 7000 kms over the next three weeks. In fact my brother is here competing as well in his Mustang, the idea came to us when we were on the Adriatic Adventure last year, we discussed it and thought we might never get the chance to go to NZ unless there was an event like this, we were enjoying a couple of beers that evening so we signed up!”

Peter Gordon (GB) Talbot 1935;  “The Monet seems to have packed up, not the supply but the sensor, it has drifted at the back of the disc somewhat, it’s incredibly sensitive to just a few millimeters. Other than that the car seemed to have travelled well, we had part of the radiator covered up from Scotland so it was over cooling as it’s a fantastic 25 degrees here so we have totally uncovered the radiator. This will be our first rally in NZ, we decided to do it when we were on the Baltic Rally about three years ago.” 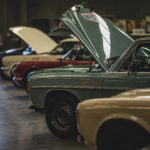 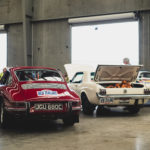 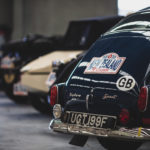 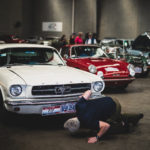 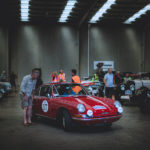 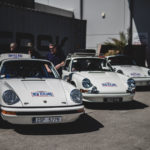