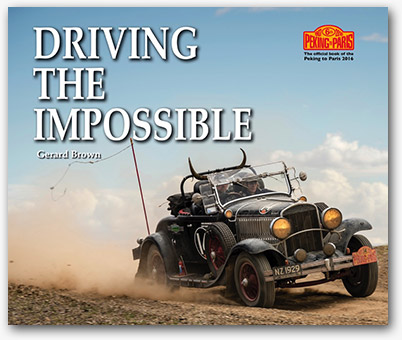 Driving The Impossible – Peking to Paris 2016

This lavishly illustrated hard-bound book, with over 300 pages and more than 650 remarkable Gerard Brown photographs chronicles the 2016 Peking to Paris Motor Challenge, is available for immediate delivery from the ERA on-line store. Click the cover image or the link below to order your copy.

The first ever Peking to Paris event took place in 1907. It came about because of a challenge published in the Paris newspaper Le Matin on 31 January 1907, reading: “What needs to be proved today is that as long as a man has a car, he can do anything and go anywhere. Is there anyone who will undertake to travel this summer from Peking to Paris by automobile?”

On that first event over 100 years ago only five teams started from Peking, but regular reports were telegraphed from along the route by a very young Syd Stelvio who travelled with the press convoy. Over the years this very same reporter has illuminated many ERA events.

Working alongside Syd Stelvio, the 2016 event was the fourth Peking to Paris that Gerard Brown has covered and as a result, he knows that there’s no such thing as an easy Peking to Paris.

This motor challenge brought unimaginable trials and tribulations to all of those who took part. Getting an old car across half of the world is never going to be an easy proposition but when that half of the world includes the Gobi Desert, Mongolia and Siberia… it really can be called “driving the impossible”.

From the minute the first car was pulled out of the warehouse in downtown Beijing till the moment the last car chugged through Place Vendome in Paris, the highs and the inevitable lows of such an incredible journey were recorded and this book is the lasting testament to this extraordinary Rally and its protagonists.

In the “Driving the Impossible” book, over 650 photographs are supplemented by the musings of the crews themselves about how they built friendships to last a lifetime and rebuilt their cars overnight.

They say a picture tells a thousand words but within this book, you’ve got both.